Cop Spots Homeless Woman Shooting Up Drugs In Broad Daylight, Then He Sees Her Stomach 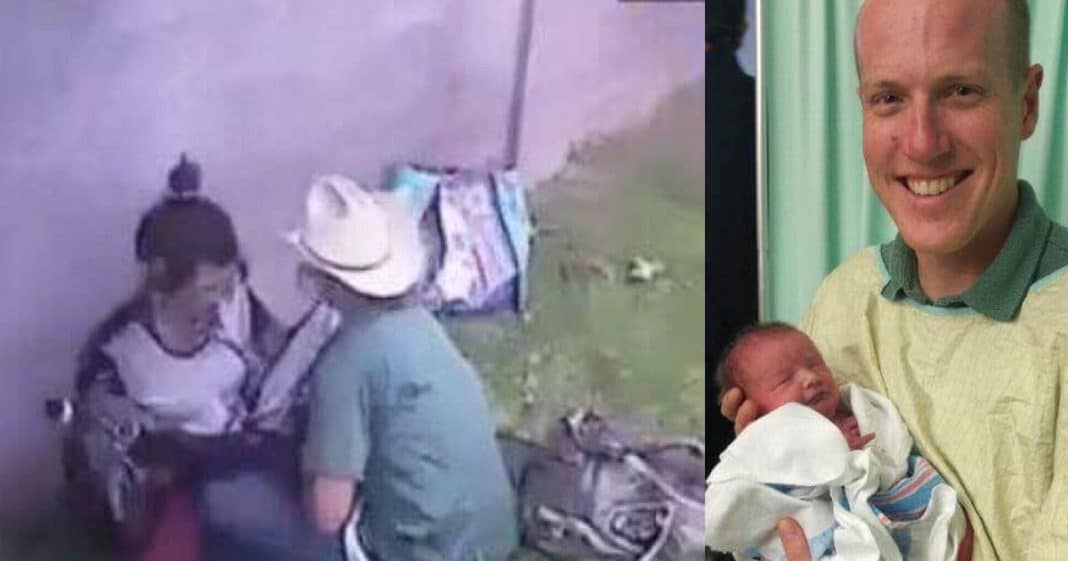 My family members and I are no strangers to adoption, as I have three adopted siblings. Two of those three were adopted together when their father died in an unexpected boat explosion. My dad saw these two babies in need of a dad, and he wasted no time to make sure he did something about it. Sometimes the moment doesn’t allow you to spend a lot of time thinking about it. Sometimes you really have to just do it, and when that is the case, you will definitely know!

Ryan Holets is a police officer who lives in Albuquerque, New Mexico. One day while making his usual rounds, he got a phone call about a theft at a local convenience store.

Upon completion of assessing the situation, something awfully strange caught his attention. Behind the convenience store and against the wall, a couple was shooting up heroin together in plain sight.

Ryan turned on his body camera as he made the decision to approach the couple, but he had no idea how much this confrontation would change his life forever.

The woman was in the process of administering the drugs into her partner’s arm when he saw the unexpected – she was pregnant.

“It’s not every day I see a sight like that and it just made me really sad,” he said.

According to CNN, through Officer Holets’s body camera footage, Crystal Champ, 35, appeared irritated and a bit disconnected as he reprimanded her for her irresponsibility.

“You’re going to kill your baby,” Ryan expressed. “Why do you have to be doing that stuff?” It’s going to ruin your baby.”

His words led her to tears as she explained to him that she was eight months pregnant and addicted. Despite her being pro-choice, she still found herself unable to go through with having an abortion.

Crystal lives outside of a tent in Albuquerque where she sat down with CNN and opened up about how she has been battling addiction since she was a teenager. At that time, she had been homeless for over two years and had been living a life that was controlled by drugs, even paying up $50 a day on heroin.

Ryan Holets had a conversation that lasted nearly 11 minutes with Crystal and her boyfriend in that corner behind the convenience store. It was during those final minutes that he felt led by God to make the decision that would be a help to both him and Crystal.

He showed them pictures of his family at home, including his 10-month-old baby, and suggested that he adopt her baby.

“I was led by God to take the chance,” Ryan explained. “God brought us all together. I really don’t have any other way to explain it.”

Ryan and his wife Rebecca had already agreed to one day adopt, but they planned on doing so after their youngest had gotten just a few years older; however, this situation needed Ryan’s immediate action, and he wholeheartedly understood that.

He got in his car and headed straight for his wife who was a going-away party only a few miles away to fill her in on what he had just encountered and what he had ultimately pronounced about it.

“He already knew my heart on the issue and he knew that I would be totally on-board with it,” Rebecca said. “We feel God has called us to do that. It’s been on our hearts for a while.”

Less than a month later, on October 12th, Crystal delivered a beautiful baby girl named Hope – picked out by the Holets.

Hope had to undergo a few treatments in order for her to be completely detoxed from the substances that she was exposed while in the womb. She’s finally at home officially, and just doing weekly medical check-ups.

The doctors and the Holets have relentless hope for Hope.

“Whatever struggles she has, we’ll be there and we’ll work through it,” said Ryan. “And that makes me happy.”

I’m so happy for Ryan and Rebecca’s compassion towards a woman and her baby who would need it the most. I pray that Hope gets the fresh start that she deserves, and that things eventually brighten up for Crystal as well.

You are appreciated, Mr. Holet. Thank you.