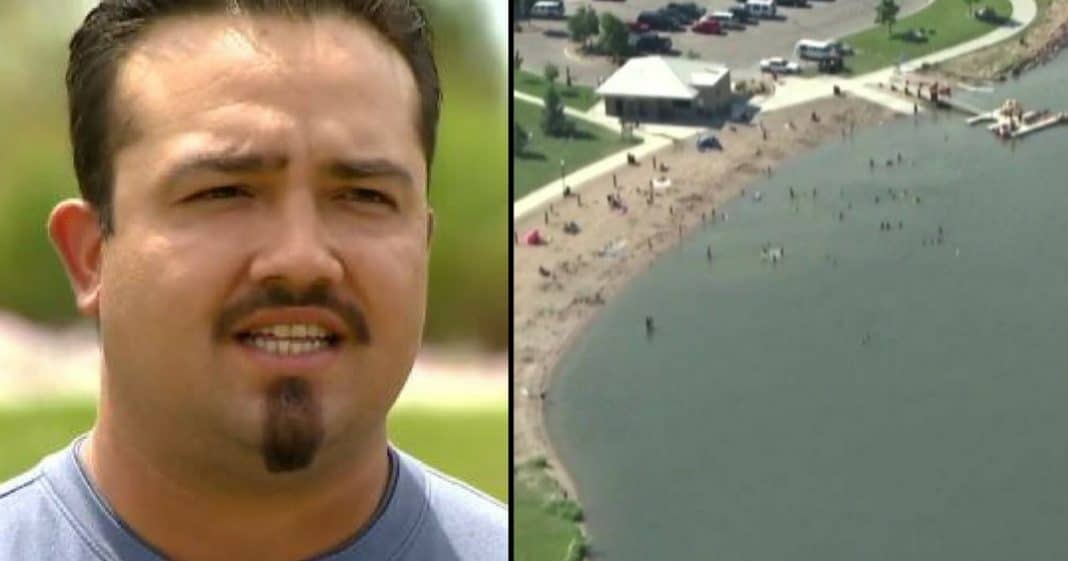 Angelo Mondragon was just planning on spending a relaxing day at the lake with his family. He had no idea that by the end of the day he would have saved a little girl’s life and thousands would be hailing him a hero.

Angelo, a plumber from Fort Collins, Colorado, was spending the weekend at Windsor Lake with his family. He waded out into the water and was about waist deep when he felt something bump against his leg.

Startled, he kicked at whatever it was, and that’s when he saw something the left him cold – a tiny foot had floated up to the surface of the water.

“It felt like something you normally wouldn’t feel in the water,” he recalled. “I did sort of a back kick to bring up whatever it was, and then I saw the bottom of a baby’s foot float up.”

Immediately he grabbed the foot and pulled the toddler – a little girl – out of the water while he screamed for her family and for someone to call 9-1-1.

“I grabbed her and carried her limp body to the shore,” he said. “The girl was already blue. She wasn’t breathing.”

Angelo began to perform CPR on the little girl and two off-duty nurses rushed to help as they waited for emergency crews to arrive.

The little girl, 3-year-old Sitlali Hernandez, was rushed to the children’s hospital in Aurora. Miraculously, doctors were able to save her.

Angelo was able to visit Sitlali and her grateful parents in the hospital and was happy to see the little girl in good condition. He said he is thankful he was in the right place at the right time.

“If I was not in that right spot at the right time, it could have been a search and rescue mission,” Mondragon said.

Since Sitlali’s near-drowning, Angelo has made it his mission to ensure something like this never happens again.

The CDC reports that “from 2005-2014, there were an average of 3,536 fatal unintentional drownings (non-boating related) annually in the United States.” That comes out to about 10 deaths every day.

One in five of those deaths are children 14 years old and younger, and for every child who dies from drowning, another five receive emergency care for injuries related to near-drowning.

Angelo knows that if Sitlali had been wearing a life vest that day, the situation could have been much different, so now he is working with local residents and businesses to collect life vests for those who don’t have them or can’t afford to buy them.

While a life vest is not a substitute for a parent or guardian’s supervision, accidents do happen, and it could mean the difference between life and death.

Many people have been hailing Angelo a hero for what he did that day, but the humble man says he just did what he hopes anyone else would do.

“As I told the little girl’s mom,” he said, “when I saw the baby’s toes that became my baby.”

Do you agree that Angelo is a hero? So share this!