Pit Bull Chained For 8 Years, Forced To Sleep On Concrete Slab – Then Team Of Rescuers Approach Her 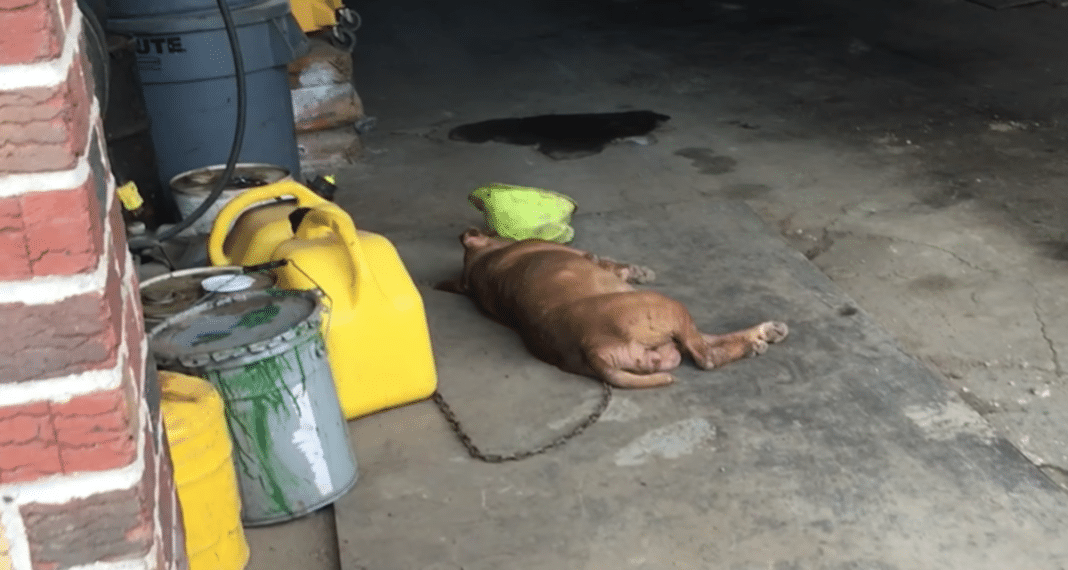 Poor Lola the dog. She lived a miserable life. For eight long years, she was kept in a dark, dingy place. She had no human interaction or love from her owner. Sweet Lola had to lay on a concrete slab until finally, rescuers saved her.

“We called her ‘wiggly butt,’” Michele Walsh, a volunteer with AMA, said. “She was wagging her cute little tail, super friendly, giving kisses and so happy to meet her rescuers. She let them take her off this chain, and they walked right out with her.”

Her owner who neglected her was convinced to give Lola up. And good thing they did too because she needed medical attention. she was taken to a vet where staff removed several tumors. Thankfully, Lola healed quickly. Shortly afterward, she was sent to a foster home until finally being adopted. Her fortunate human? Charlène von Saher of Manhattan.

Though she’s only been in her new home for a few weeks, Lola has already figured out the most important thing: Where she’s meant to sleep. “She figured out where her little beds were, and what was soft and what was comfortable for her,” von Saher said.

Just waiting for my mom to come home….and it’s Monday again. ?. On the upside, I did get a new holiday bed from my Rei Rei. #spoilednotspoiled #amaanimalrescue #pitbulllove #LivingLaVidaLola

Von Saher has nothing but praise for her sweet Lola, “She actually took a throw pillow off of my bed, and put it into her dog bed,” von Saher said. “When I came home, her head was on it — she literally made herself a little bed in her bed with my pillow. It was like ‘The Princess and the Pea’ — I guess she liked having multiple cushions underneath her.”

Not hard to understand if all she’s had to sleep on for years was a concrete slab.

“I was out for a minute, and when I came back, Lola had moved the smaller bed on top of the other bed and put herself on top of it,” von Saher said. “It was hysterical. I couldn’t believe it when I came in.”

Von Saher realizes what good she’s done by adopting Lola. But it hasn’t been much of a trial. More like a pleasure. “I think she looks better and better each day,” von Saher said. “They always say, ‘When you adopt a dog, you’re really saving two.’ That’s because you’re taking one, and you’re opening up space for another dog to come into the shelter or the rescue group.”

”I absolutely adore her,” von Saher added. “She’s added so much to my life already.”