Pilot Spots WWII Vet’s Hat, Calls Him To Front Of Plane. What He Does Next Had Me In Tears 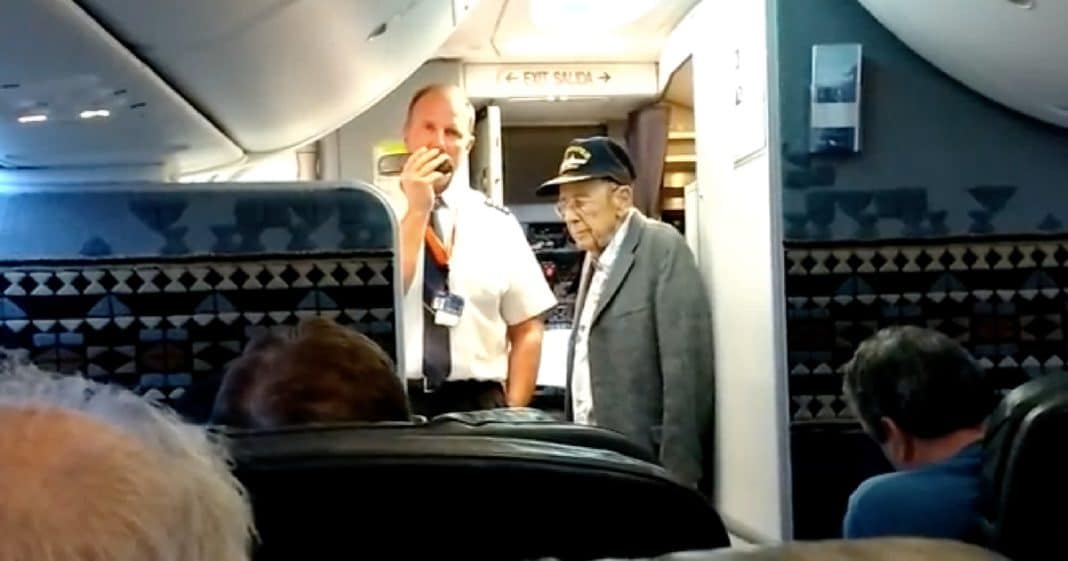 The word “hero” gets thrown around rather casually these days. Different athletes are called heroes because they can run fast or throw a ball far. Celebrities get called heroes when they bring a certain fan up onto the stage with them.

But what really constitutes a hero?

Captain Brad Schumaker, a pilot for Alaska Airlines, agrees that the word has lost much of its meaning, and he took the time recently to educate his passengers on what a true hero looks like.

Schumaker spotted John Woolston as soon as he got on the plane. The elderly gentleman was wearing a hat that identified him as a World War II veteran.

Not only is Woolston a WWII vet, he is one of the few remaining survivors of the U.S.S. Indianapolis, a ship whose crew was incredibly instrumental in ending the war, and which was sunk by a Japanese submarine when it was on the way back from its top-secret and crucial mission.

Schumaker called Woolston to the front of the plane and got on the intercom to share this true hero’s incredible story with the rest of the passengers.

By the end there weren’t too many dry eyes left onboard, and when you hear what he had to say you’ll know exactly why.

“Seems like nowadays people toss around the whole word of ‘hero’ pretty lightly,” Schumaker says in the video captured by passenger Glenn M. Forrest III. “Now, we talk about heroes being people who can hit a ball really good or run particularly fast, or what have you. Whatever the case might be, I think it’s lost a little bit of its gravity.”

Then he said something that left many of the passengers stunned.

“I think it’s safe to say, courtesy of this gentleman and all of his shipmates, we’re free,” Schumaker said.

He went on to tell the harrowing story of the U.S.S. Indianapolis.

Woolson and the other 1,195 men onboard the ship were tasked with the mission of delivering the bomb that would later be dropped on Hiroshima.

On their way back, a Japanese submarine found them and hit the ship with two torpedoes. In only 12 minutes, the ship was gone.

Of the almost 1,200 men onboard, only about 800 survived the initial sinking. For five days they bobbed in the South Pacific, praying for a rescue. Hundreds more lost their lives during that time, many of them to sharks.

When they were finally rescued, only 321 men remained, and only 317 survived after that.

The sinking of the U.S.S. Indianapolis was the greatest single loss of life at sea in the history of the U.S. Navy. Today only 22 of the original crew are still alive, Captain Woolston being one of them.

“[O]ne of the great men of World War II, and somebody that I personally feel we owe an incredible debt of gratitude to, and a tremendous honor,” Captain Schumaker said before turning to Woolston. “Thank you for your service.”

As Woolston made his way back to the first-class seat they had given him, the other passengers reached out to shake his hand, letting him know what an honor it was just to be on the same plane as him.

“As a veteran and citizen of this fine country,” Forrest wrote when he posted his video, “I’m in awe of Alaska Airlines and what they did to go beyond and fly higher than all the rest. Bravo Zulu Alaska!”

Were you touched by what this pilot did for this incredible WWII hero? So share this!