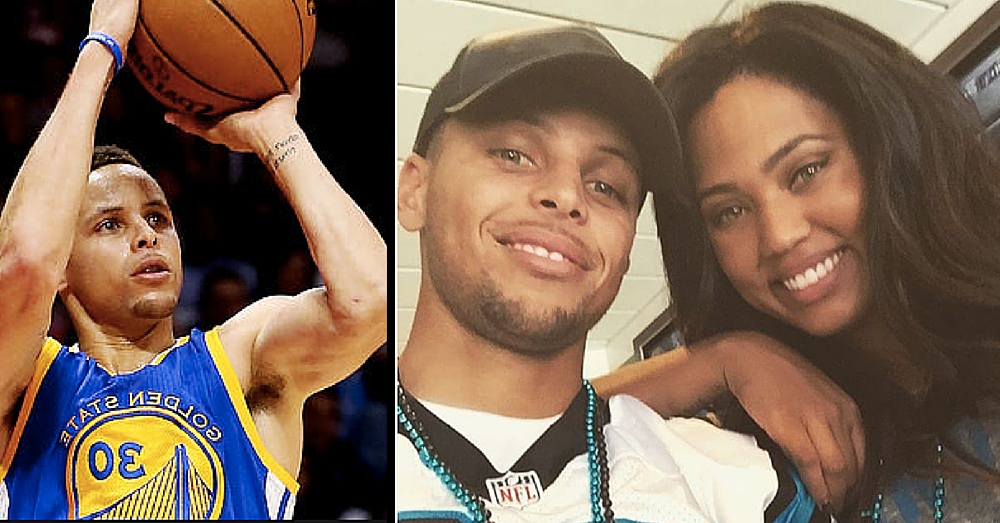 NBA star Stephen Curry has become a household name in recent years after leading his team, the Golden State Warriors, to a best-ever regular season record – 73-9 – and an NBA Finals win last year. However, the player, known for his prowess on the court and incredible shooting skills, has become almost as well-known for what he does off the court.

His daughter Riley, 4, became a bit of a celebrity in her own right last year after Curry started bringing the precocious tot on stage with him for press conferences, and his love for his wife and his family is evident. After being awarded the MVP award for the second year in a row and with a unanimous vote – the first time ever in the NBA – Curry took to the stage and thanked his wife, Ayesha, for everything she has done to support him and hold their family together.

“None of this is possible without you,” he said. “You’ve given me the opportunity to go out here and work as hard as I do, spend the hours I need to do at the gym, during practice, for games, on the road – all the while holding down the house and doing the little things that keep our family going.”

“You’ve given our two daughters an example to look up to as they grow up,” he continued. “I don’t take that for granted at all. It’s definitely special to watch you do what you do every single day – the strength that you have, the patience that you have.”

The couple met as teens when they were in youth group together at the Central Church of God in Charlotte, North Carolina. They married in 2011 after dating for three years and now have two daughters together – Riley and Ryan, 1.

Happy Mother’s Day to my beautiful wife @ayeshacurry. I marvel every day at how much you do for our family and how you give our 2 little girls your time, focus, TLC and 100% of who you are. No better and more rewarding job than motherhood and you are a natural! Those sleepless nights I know are rough but you handle it all so well, I feel blessed knowing Riley and Ryan have you as their mother. Hate that I’m not there to spend the day with you but I’ll make that up to you soon! #happymothersday

“Whether I have a good game or not, you’re the same person every single day,” he said. “And that means a lot to me to be able to come home and share life with you. So thank you very much for who you are.”

At a time when so many athletes and celebrities are known for their partying and infidelity, it is refreshing to see a young athlete with so much talent stick to his values and put his family first.

Were you impressed with what Stephan Curry said about his wife? So share this!