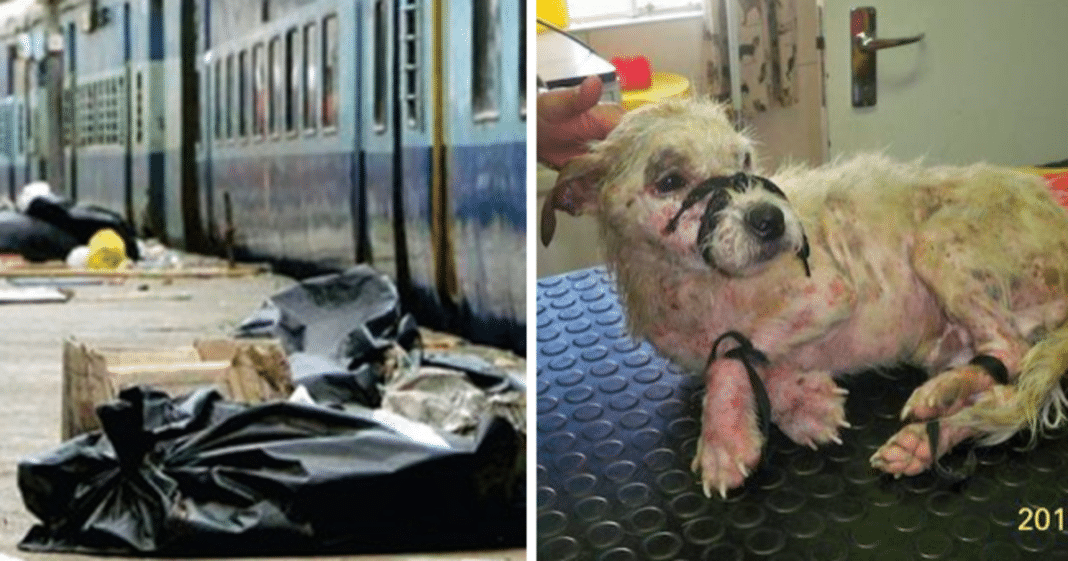 Lourens van Wyk is a retired pastor living in Cape Town, South Africa. He made a horrible discovery one day while driving by some railroad tracks. He spotted a plastic bag with something inside. He suspected it might be a helpless baby. It wasn’t a child, but it was most certainly defenseless and abandoned.

He found a dog who was tied up with shoelaces; the pup was in terrible condition. He’d been abused. He couldn’t move or bark or hardly breathe. The kindhearted man knew he needed to seek help for this sick animal who was later named Trax.

This doggy has just arrived at our kennels. His mouth and legs were tied up and he was dumped on railway tracks in a plastic bag. He has had lots of yummy food and lots of TLC from us, and is doing well.

He took Trax to a veterinarian before reaching out to the Helderberg Animal Welfare Society. The society had all the adequate resources this sweet boy would need to start a new positive journey.

This is too special, we just have to share! Pastor Van Wyk (who rescued Trax and rushed him through to our kennels tied…

The welfare society extracted Trax from his prison of shoelaces. The dear pastor dared not try and untangle them without help.

“A little update on Trax – the doggy who arrived at our kennels yesterday after being rescued off the train tracks, in a plastic bag with his mouth and 4 feet tied together. After cutting all the ropes off him, our vet examined him, and he got a thorough health check,” the animal organization wrote on their Facebook page.

Trax has suffered such horrific abuse that he has head twitches that result from being struck in the head. Vets also suspect he’s suffered concussions in the past. He also has mange. Staff and volunteers at the welfare society gave the poor guy plenty TLC. In a few days, Trax’s loving personality began to shine through. He loved spending time with his new human friends.

A little update for all our Trax fans!! He is doing simply great!!! And what a tail wag we get when we give him love <3…

“Besides the fact that he has mange and is covered in sores, scabs, and wounds- he is otherwise healthy. He is still quite young. He has had a warm bath, is eating very well, and is responding so nicely to all the TLC and love we are giving him! He loves to be with us and likes to gently paw us for some extra attention. His tail is wagging a little, and we know he feels safe, relaxed and loved. He spent most of today sleeping in his bed (under two blankets) so has really been snug and warm in this cold weather!”

He was treated for a few more weeks until he was physically and emotionally ready to be put up for adoption. Though still shy around strangers, Trax had no trouble opening up to people he knew. “He is such a special little chap with a very loving heart, and we are so glad we have had the privilege of getting to know him!”

A little update on Trax – the doggy who arrived at our kennels yesterday after being rescued off the train tracks, in a…

The welfare society never lost touch with Trax and his forever family. They posted some updated photos you can check out. I’m so glad this sweet boy is doing so well!