Passengers Hassle Mom With Crying Babies. What Stranger Does Next Leaves Her In Tears 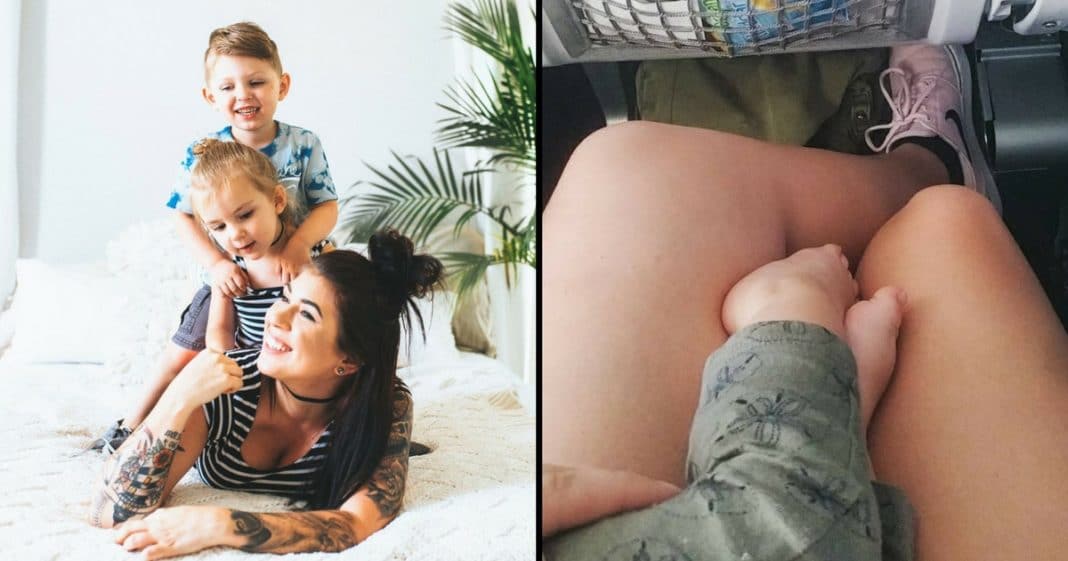 Nobody likes listening to a child cry and scream on a plane (or anywhere for that matter). It’s not a pleasant sound to listen to – by nature, a cry is meant to get someone’s attention so a problem can be rectified.

Most parents will do everything they can to get the crying to stop, but as anyone who has ever had kids – or been around kids – knows, sometimes it can take a lot of time and a great deal of effort to calm an unhappy baby down.

You would think that a good number of the people traveling on a plane have children of their own (and they ALL were children at one time) and so would have some sympathy for a struggling mom. Unfortunately, as we have seen time and time again, that is not the case.

People make faces and rude comments and assumptions about the parent that are most likely inaccurate. And never once do they offer to help the frazzled mom or dad.

Well, on a recent flight from Seattle to Denver, one passenger had had enough with the mean looks and comments and she decided to actually do something about the situation instead of stewing in it.

Kesha Bernard is a mom of two – a 3-year-old daughter and 4-year-old son – and had just taken her first trip without them. As she settled into her middle seat and the crew checked into some weight issues with the plane, a baby a few rows behind her started crying.

Being a mom, Kesha was able to tune the crying out, but what she couldn’t tune out was the “huffing and puffing and mumbling” going on around her.

All of a sudden, another child started crying – the toddler sibling of the crying baby. She was having a meltdown over having to wear her seatbelt.

At this point, the woman in front of the toddler started complaining to the mom – who had her hands full with three kids and was doing her best to calm them down – and even reached behind and grabbed her leg.

The whole time this was going on, Kesha was waiting for another passenger closer to the woman to offer to help, or for the flight attendant to step in. Instead, the flight attendant just stood by watching and the other passengers started making comments about the poor mother’s parenting skills. One woman was even holding her hands over her ears and glaring at the mom.

It was at this point – 15 minutes in – that Kesha decided enough was enough.

“I couldn’t take letting this mother drown back there….(and let me tell you she was being so freaking calm you guys….like i would have already been crying but she was doing so good),” Kesha wrote in a now-viral Facebook post.

She got up out of her seat, walked back to the woman, and asked if she needed any help. The woman quickly handed Kesha the baby to hold while she tried to deal with her toddler.

As Kesha settled back into her seat, the baby stopped crying and fell asleep in her arms.

“Be nice and considerate,” she wrote. “If someone needs help for God’s sake HELP THEM. Complaining and mumbling doesnt do a damn thing except make the person that needs help feel worse (words hurt ).”

“[Y]ou’re telling me Im the only ONE out of a full plane that was willing to help????” she continued. “How we can ignore a human in distress beyond me. Please be kind. Please be considerate. Help one another…it makes everything easier. I promise you wont die.”

Kesha’s post obviously hit home for a lot of people – it has been liked and shared hundreds of thousands of times.

She said she is amazed by all the attention it has gotten but hopes others will take her message to heart.

“I’m surprised that people are surprised by people doing something like that,” she said. “I didn’t do anything extreme or amazing. It’s crazy that it’s getting this much attention, but I’m happy and humble … to have something light and good in the news.”

If each one of us were to reach out a helping hand to those in need instead of showing scorn, this world would be a much better place. We could all learn a little something from Kesha!

Were you touched by the way Kesha stepped in to help this struggling mom? So share this!