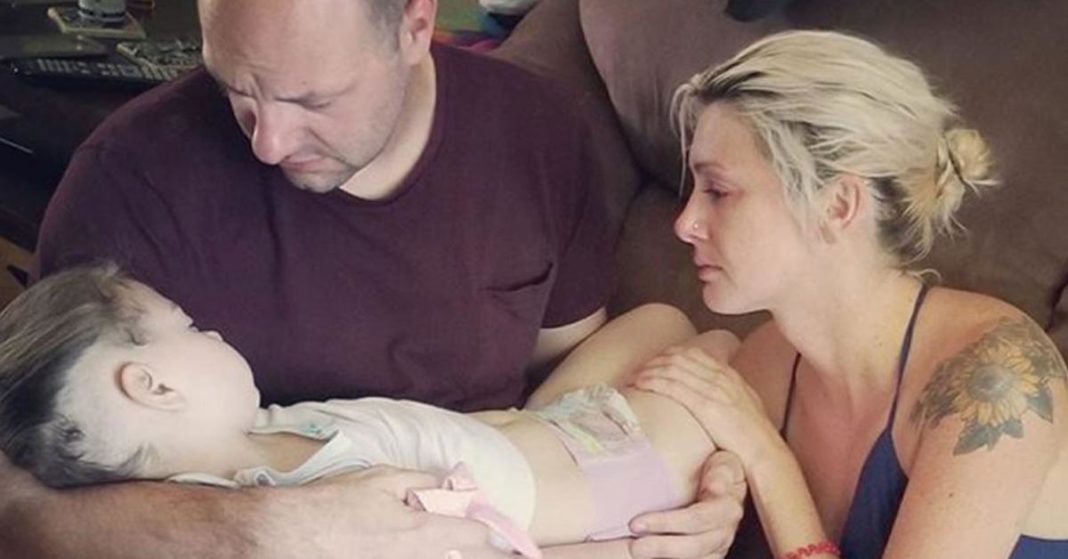 On July 4, Casey and Ben Daggett, of Fairport, New York, took an emotional photo of their 5-year-old daughter Zoey fast asleep in their laps. What they didn’t know then was that it would be the last photo they’d ever take of their little girl.

The Daggett family has shared updates on Zoey’s health via their “Zoey’s Fight” Facebook page. Mom Casey says she was committed to sharing “the good photos and the bad photos,” and that she wanted to share the “peaceful photo” to “give others hope.”

Zoey is going to be shared with the world. Her love and light have been abundent and we will continue to pay it forward…

In 2016, doctors found a brain tumor and diagnosed Zoey with diffuse intrinsic pontine glioma (DPIG). After years of treatment, her health began to decline rapidly in March. By the end of June, Casey says she and Ben knew their daughter wouldn’t live much longer.

The day before Zoey’s death, she didn’t sleep through the night, Casey says. The devoted mother says something was “different” about her daughter on the 4th of July, and she and Ben “just knew” it would be her final day.

“I was extremely sad. I couldn’t believe it was actually happening. It was just heartbreaking,” she says. “Everything just fell to the pit of my stomach and I just sobbed and cried. I didn’t want to let her go. It was a horrible day.”

Around 11:30 a.m. nurses snapped the photo of the Daggett’s holding their little girl.

“We were both talking to her and crying,” Casey recalls of the moment. “I was saying, ‘It’s okay. It’s okay to let go. You’re gonna be okay. You’re gonna see people that you love. Just let go.’ I was trying to talk her into letting go because I knew her body had already gone through so much. It was so sad.”

This past week Zoey decline has more rapidly than anticipated and we believe we have only a few weeks if we are lucky….

Zoey died at 4:17 p.m. They broke the tragic news on the account, writing that their daughter was “finally allowed peace.”

At 4:17pm on July 4th 2018 the firecracker of a daughter that we named Zoey Catherine Daggett was finally allowed peace…

Our thoughts and prayers are with the family during this extremely difficult time.