Parents Smile For Camera With Newborn Triplets. But Look Closely At The Babies’ Faces… 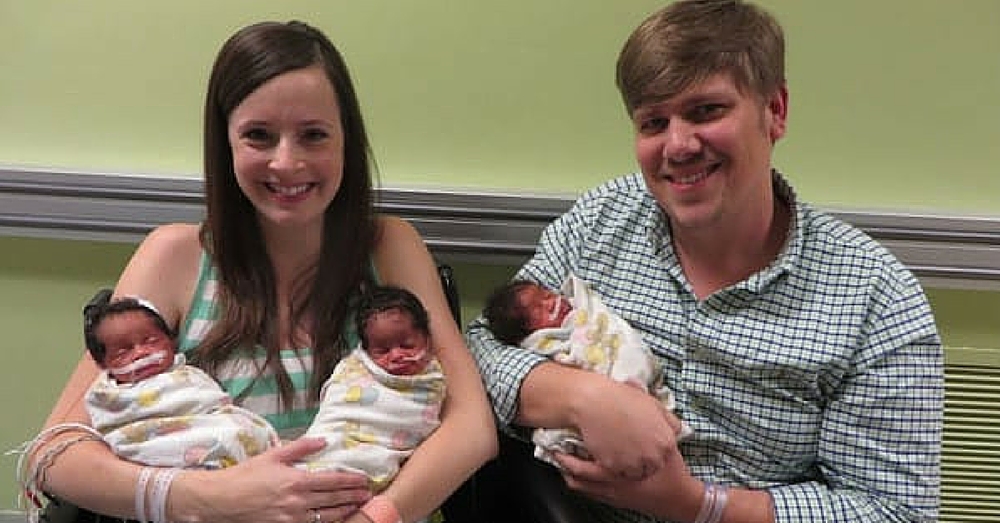 Aaron and Rachel Halbert always knew they wanted to adopt. Being pro-life, they felt that adoption was an important alternative to abortion, and they wanted to support young mothers who were choosing life. When Rachel was unable to get pregnant, their desire to adopt was fueled even more.

Aaron and Rachel made the decision to adopt two African American babies – one boy and one girl – from an adoption center in Mississippi.

While they did face some racism and curious stares, they loved their little family and didn’t plan on adopting any more children.

Then one day the couple found out about a program called the National Embryo Donation Center that takes embryos that would have either been destroyed or donated to science and gives them to Christian centers where they can be adopted and implanted by couples who cannot conceive children on their own.

They decided they would adopt two more children using this method. They chose two African American embryos and had them implanted.

That’s when something happened that left the couple stunned.

At the time, Aaron and Rachel were living in Honduras as full-time missionaries. Six weeks after the embryos were implanted, they made the trip to the hospital for an ultrasound.

The doctor asked them several times if they were sure they had transferred two embryos. When the couple assured him they were, he told them that one of the embryos had split and Rachel was now pregnant with triplets!

Though it came as a shock at first, the Halberts were quick to rejoice in their rapidly growing family.

“It’s been heartening to see virtually all of our friends and family express overwhelming support for our family and the unusual ways we’ve built it,” said Aaron. “In our minds, we are just living out our dream. A dream that may not look like the average family, but one that we are thankful could come true in light of our country’s history. It’s especially encouraging to see so many of our fellow millennial evangelicals now placing a high priority on life, adoption and multi-ethnic families.”

While their family may not look exactly “the way we planned it 12 years ago when we were dating and talking about adoption…how thankful we are for God blessing us with these sweet little ones He has placed in our care. I can remember a friend going through the adoption process telling me he had always wanted his family to look like a little United Nations. As I look at my growing family, I prefer to take it a step further, daring to hope that our family picture is a little hint of Heaven.”

Were you inspired by this family’s incredible and beautiful story? So share this!