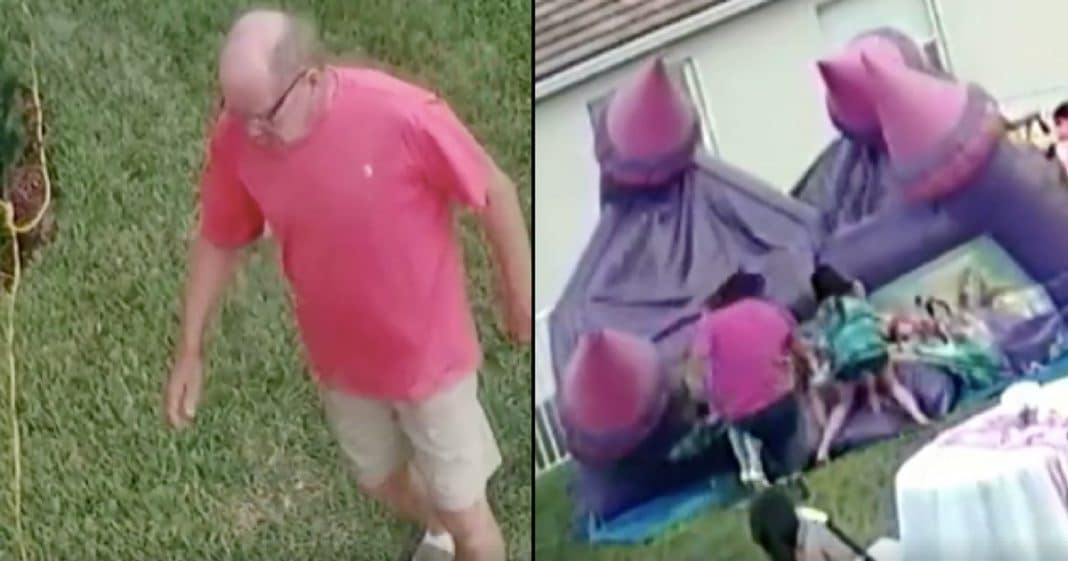 It started out as a day full of celebration and fun, but by the end of it children were crying, parents were furious, and the police had been called to intervene.

Deborah Romero had planned a special party for her daughter Diana’s first birthday. It was supposed to be a day of fun to bring family and friends together and celebrate the special little girl. Deborah even hired a DJ and rented a bouncy castle to make the party extra fun.

But all of that fun came to a crashing halt when parents looked over and noticed that the inflatable castle was deflating, trapping about a dozen kids – all only 2 or 3 years old – inside.

Instantly the parents ran over and began to grab their screaming and crying children out of the castle before they got hurt or suffocated inside.

“Chaos. Absolute chaos,” Diana’s godfather, Glenn Hunt, recalled. “Some of the kids were crying. One of them actually was kind of traumatized by the incident. Another one when he was being removed, his leg got a little injured.”

The family didn’t know what had happened to cause the castle to deflate until they looked at surveillance footage later. There they saw one of their neighbors walk over, pull the plug on the bouncy castle, and then nonchalantly walk away.

“We believe that he thinks that he was pulling the plug to the DJ booth, but it didn’t, it pulled the plug to the bounce house,” said Master Sgt. Frank Sabol of the Port St. Lucie Police Department.

Police say they have identified the man, but when they tried to question him he was uncooperative and told them he would be hiring a lawyer.

While we haven’t yet heard the man’s side of the story, thousands of people who have seen the footage are appalled at his behavior and are calling for action to be taken. One commenter, Matthew Scott Howe, said the man should get charged with child endangerment.

“Pretty sure he could’ve killed them,” said commenter Kara Hadala. “These are toddlers. They are small. Big, heavy plastic encasing them could’ve very easily killed them.”

Even if the man thought the music was too loud, he could have easily gone over to talk to the neighbors about it instead of just trying to unplug the music.

“I gotta say this is very irresponsible for somebody to do that,” Sabol said.

As police attempt to sort out the reasons behind what the man did, hopefully others will learn from his actions and not follow in his footsteps.

“I was appalled,” Hunt said. “I was absolutely appalled that somebody would have the nerve. Don’t take matters into your own hands and cause harm to other individuals, especially children.”

Do you think this man should be held accountable for his actions? So share this! Thank You!