Parents Forced To Leave Their Premature Baby At Hospital, Then Police Department Steps In 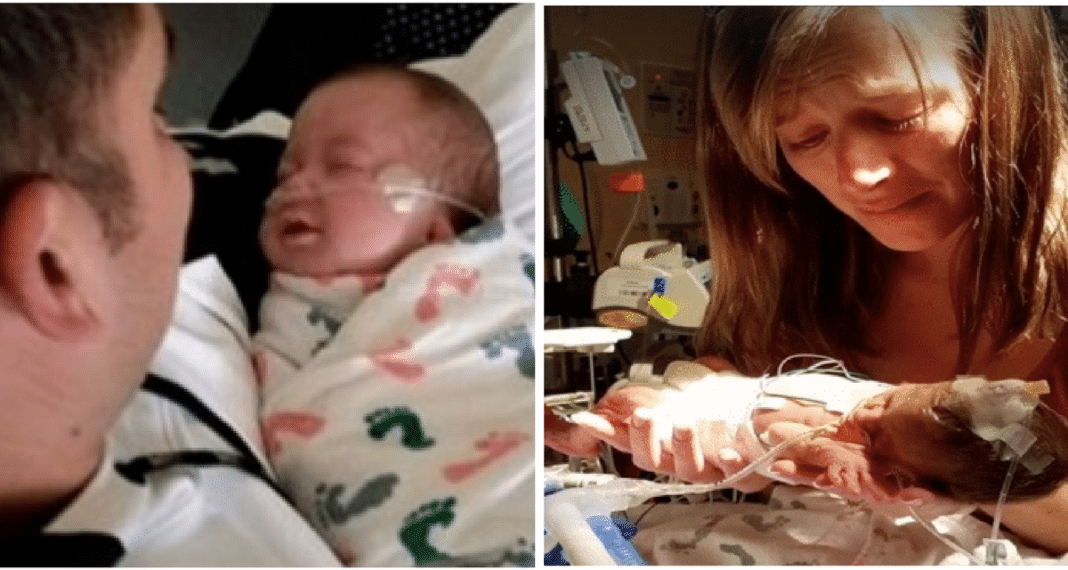 The story of how one Coloardo police department came to the rescue of a fellow officer’s premature baby to offer cuddles and human contact has captured the hearts of the world, going viral and appearing in publications like People.

Almost 11 weeks before her baby was due, police officer Melissa Winch had to go the hospital. Her water broke far earlier than anyone could have expected. To make matters far worse, she developed an infection and needed an emergency C-section.

The doctors delivered baby Axel, at just 2 lbs. 12 oz., but nobody knew if he would make it through the week. He may have been born blind and deaf and had problems with his bone structure. They later found out that he had developed much more serious problems.

“If he did live, he may have a lifetime of surgeries, pain, immobility and all sorts of disabilities. It was very likely that if he lived the next couple of weeks, he would have a very short lifespan,” said Melissa.

Things went from bad to worse when Axel developed a life-threatening condition causing a part of the intestine to die called necrotizing enterocolitis. Axel has flown 250 miles away for emergency care at an intensive care unit but miraculously made a recovery before the surgery was to take place.

Although Axel survived that ordeal, he needed multiple other procedures. Melissa and her husband, Adam stayed at his side for weeks, but soon they had no choice but to return to work.

“I cried not all the way home, but a majority of the way home. It’s terrible,” Melissa said of having to leave her baby in the hospital.

Who would give Axel the tender loving care that had helped him get through his first weeks of life? How would Melissa and Adam know what was happening to their child?

That’s when the Aurora Police Department rallied the troops and Sgt. Mike Pitrusu set up what they called the “Cuddle Watch,’ a voluntary program assigning almost 20 officers to keep watch on baby Axel. They would provide him with the personal attention and care that his parents were forced to temporarily give up, at a critical time for the baby’s development.

Not only did Axel benefit from the love and attention, as the officers cradled him and talked to him, but the parents received frequent updates on how their baby was doing –an enormous relief. Plus the Sergeant says the officers really enjoyed it too!

“They were people who demonstrated so much love and kindness—it was just a comfort we could not replace,” Adam says. “It spoke the world to us, it brought a comfort we don’t know how to describe.”

Finally, three months later, Axel was finally ready to come home. He surprised everyone at how well he has done, despite serious setbacks that the doctors didn’t expect him to survive at all.

“God has truly worked in this kiddo’s life and touched him medically compared to what modern medicine was predicting,” said Adam.

Axel continues to face more procedures to correct ear canals that are small compared to most children, along with other ongoing complications, but his father says Axel is managing to smile through it all.

The staff at the hospital, as well as the officers who set up the “Cuddle Watch,” have all played a remarkable role in Axel’s recovery, and he still receives an outpouring of attention when he returns to the hospital for ongoing care.

“He came into this world fighting and still is, all without forgetting his desire to smile through it,” said Adam.

*****Axel update*****Axel is being held in Children's Hospital again. It's not really a big deal – he had a scheduled…

See more from 9News (KUSA) below:

Axel's parents stayed by his side in the NICU for months after he was born, but they eventually had to go back to work. Aurora Police didn't want him to be alone, so they formed the "cuddle watch."