Parents Baffled By Son’s Mysterious Health Problems, Then Tests Reveal Dump Site May Be The Cause 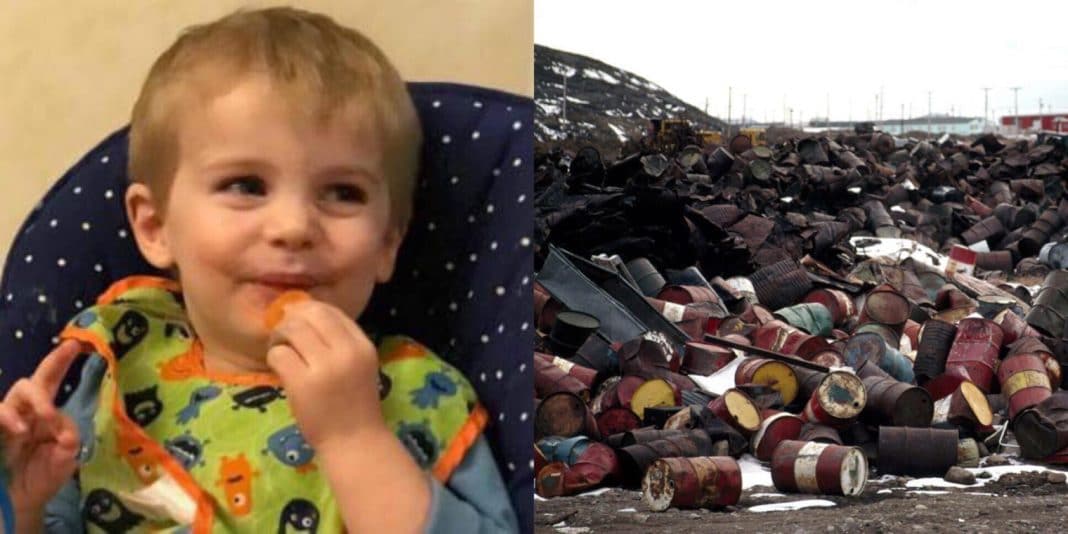 When you decide to settle down with someone and make a home and a life, if you’re lucky, you’ll have children. You hope they’ll grow up healthy and active, not be frail and sick.

A couple worries about the long-term health of their little boy and how something so fundamental in their environment could have possibly caused cancer in their 20-month-old precious baby.

Seth and Tobyn McNaughton are from Belmont, Michigan. They live across the highway from an old chemical dumping ground used decades ago by Wolverine Worldwide to dispose its sludge. The plant is in Rockford, Michigan and was once a tannery site. Incredibly, nearly fifty years after the company quit using the land, the repercussions of these decisions are having a dangerous, even deadly impact on the health of those living near the polluted chemical wasteland.

The substances carelessly discarded have contaminated wells and the drinking water of folks in the community. It ruined the McNaughton’s well.

The McNaughton’s son, Jack, has high levels of toxins in his blood: “He’s so small,” Seth said.

Tests revealed that Jack has 484,000 parts per trillion of PFAS, (a likely carcinogen), in his blood. This is almost as high as the levels found in the groundwater at the plant in Rockford.

“We love him so much and to have him have that amount of chemical in him is just horrible,” Seth said.

PFAS is a family of chemicals; PFOA and PFOS are part of this group. These toxins were used in Scotchgard. The product was produced by 3M and used by Wolverine with its shoes.

Another test done on a local woman named Sandy Wynn-Stelt found she had 5 million parts per trillion of PFAS in her blood. The doctor who led a blood test study of people affected by a PFAS crisis in West Virginia said the chemical would become active in the body after anything over 5,000 parts per trillion.

“A small amount triggers about the same biological effect as a large amount,” said Dr. brook’s led the study, where he tested the blood of 69,000 people. None of the children he previously tested had levels as high as little Jack.

“It’s way high,” he said. But he referred to the levels found in Sandy in-Stelt as “breathtaking.”

“She’ll never get it out of her system for as long as she lives.”

The studies done in West Virginia discovered a clear link between PFOA and six medical conditions: testicular and kidney cancers, ulcerative colitis, thyroid problems, high cholesterol and hypertension in pregnancy. PFAS accumulates in the blood over time, usually through drinking contaminated water and using other products containing the chemical. It takes years to leave the body.

The Varnum Law firm has filed almost 50 lawsuits against Wolverine on behalf of families whose wells were affected by this contaminated water. The firm also paid for the blood tests of those believed to be affected by PFAS. A Federal class action suit has been filed as well.

When she learned the results of Jack’s blood test, Tobyn collapsed: “I said, ‘In his tiny little body?’ And I just grabbed him (her husband), and I started crying.”

The McNaughton’s wonder now if the polluted water is behind Jack’s frequent colds and ear infections: “His immune system, is it being affected?” Jack’s dad said. “And just the thoughts and fears of future illnesses and cancer is on our mind.”

Wolverine has paid for carbon filters for the McNaughton’s, practically eliminating PFAS from their well. They still choose not to drink the water: “Our dream home, you know, now to start our family and have family planning and kids and now we’re freaked out about having another kid,” Seth McNaughton said. “It just sucks.”

Sandy Wynn-Stelt lives directly across from the site. She’s been there for 24 years. Her well contains 542 times the recommended amount of PFAS by the EPA.

“It meant a lot to me, now that I’m hearing I’m breathtaking and not in a good way,” she said of her test results. “It makes you start re-evaluating everything. Is this going to kill me? that’s what I want to know.”

So far, wells at 78 homes in the county have tested over the EPA’s recommended PFAS level of 70 parts per trillion. Michigan set its PFAS standard for drinking water to match that of the EPA. Previously, the state didn’t have a guideline.

I don’t like using the saying too little too late. But sadly for Jack and the McNaughton’s neighbor and perhaps many others, they were exposed to something that could end up killing them.

It’s good the company is doing what it can to repair the damage caused by decades of pollution. No amount of money can undo what’s already occurred. Jack could have PFAS in his body for the rest of his life. And he’s only 2-years-old. What other longterm effects will PFAS have on him and his future?

There’s no way of knowing; and if I were one of those affected by PFAS I’d be scared. I’d feel horrible for exposing my family to something that harmed them, but knowing better, I’d do better by them.