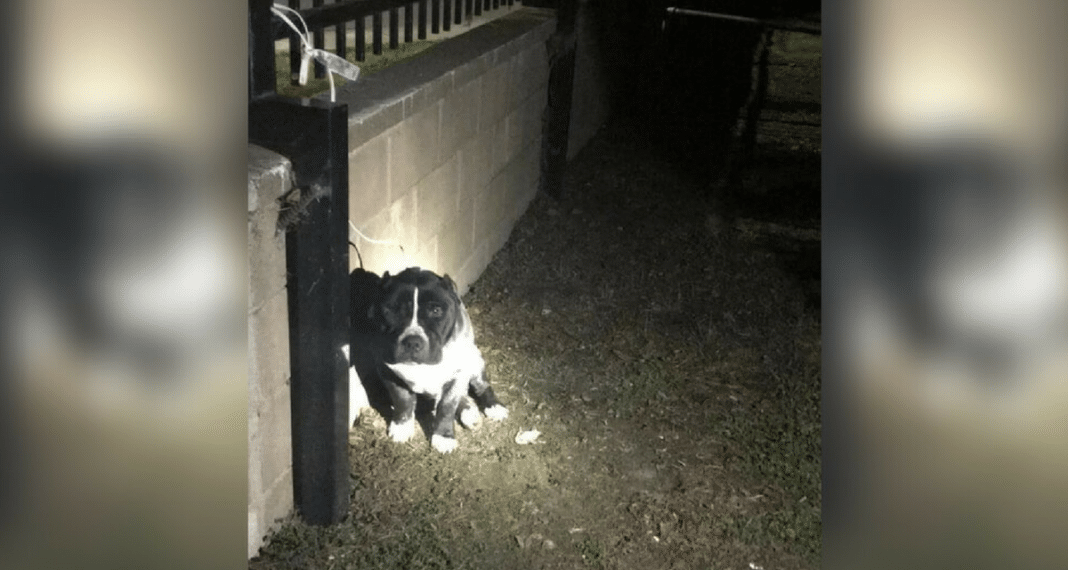 While going about their business one evening in January in Vallejo, California, a total stranger came across an abandoned pit bull outside a cemetery. This poor dog, (who would later be named Cosmos), had no collar or leash. The person who tied him there didn’t even leave him enough room to lie down; they deserted him without food or water. The people who abandoned him tied him to a cemetery fence with an extension cord. They didn’t have the decency to use a leash.

Understandably, this person probably had more anger than questions; they took a photo of the dog and posted it online along with a caption of the location so someone could come and rescue him.

We are so grateful to the good samaritans who rescued this poor boy last night. He was abandoned and tied to a fence at…

Posted by Humane Society of the North Bay on Sunday, January 21, 2018

Who knows why they didn’t temporarily take in the pit bull themselves. Perhaps they were afraid of dogs. Or maybe it was Cosmos’ appearance that made them reconsider helping him themselves. No matter, they did the right thing by snapping a photo and accompanying it with a helpful caption.

Two other good Samaritans spotted the photo and went to free cosmos. These folks already had four dogs of their own. They took the pit bull home for the night before taking him to the humane society of the North bay the next morning.

Some have asked why these folks didn’t keep Cosmos. Their dogs were all rescues; they couldn’t afford to take in another. The dear boy must’ve struck a chord with them because they offered to pay the fees for anyone who wanted to adopt him.

Though he has cropped ears and pit bull features, Cosmos loves snacks and is very affectionate and friendly. The shelter posted this photo of him with an update and description.

“He will need some medical treatment and lots of TLC,” they wrote. “But he is already wiggling his butt and wagging his tail!”

Cosmos remained on stray hold for a few days just in case his former owners decided to claim him. No one did. But if they had, they would’ve had a lot of explaining to do.

Posted by Humane Society of the North Bay on Saturday, February 3, 2018

Cosmos has found a new forever home with a man named Andrew. Way to go, gents! May you have a great life filled with treats and tickles and wagging tails.