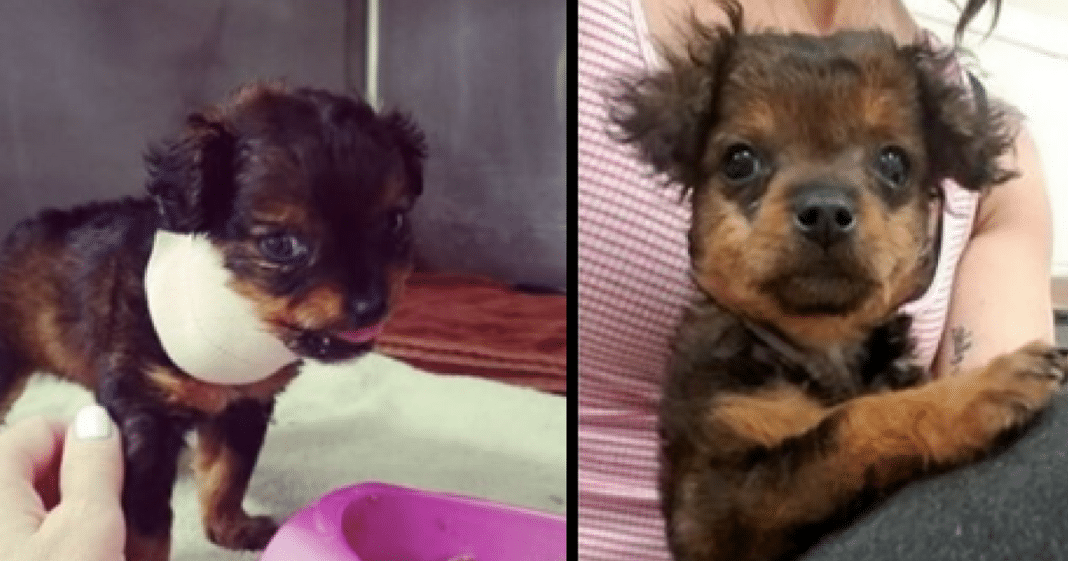 Not all pet owners love for their furry friends is unconditional. Some people abandon and give up their animals at the first sign of imperfection or when something appears to be wrong. This is an all too common occurrence; people only want an animal for as long as it’s convenient for them.

One puppy who was deserted by its family was 6-week-old Bo who would later be named Bella. This family gave up on their dog when they noticed she could no longer walk. They assumed she was paralyzed and took her to the vet to be put down.

This was posted by Hand In Paw shelter on their FaceBook page: “I know I haven’t posted an update on baby little Bo in a while! She is the puppy that was left at the vet by her family, with an order for euthanasia, because they thought she was paralyzed, but it turned out she just had low blood sugar! She is doing so much better, though we are now treating her for puppy strangles. She will be fine in no time though!”

I know I haven't posted an update on little baby Bo in a while! She is the puppy that was left at the vet by her…

Bo’s owners didn’t even stick around to make sure she was euthanized. The vet on staff didn’t want to put her down without doing all they could to help. Tests determined Bella was hypoglycemic. Piper Wood, founder of Hand In Paw, was entrusted to care for Bella.

“Maybe they weren’t feeding her enough, and her blood sugar was too low,” she said about the pup’s former family.

Piper talked more about Bella’s quick recovery. “It was a pretty simple fix. A  couple IVs, some fluids and she was fine. It probably cost less than euthanasia.”

But poor Bella’s emotional care needed more looking after; she was afraid of people and shook a lot. But with an IV, Bella would soon be on the mend.

Look at our new baby, Bo! Her former owners brought her in to our vet yesterday. They said she was paralyzed. They stated that they didn't want her, immediately signed her over, refusing any treatment (except euthanasia), and just left! Dr. Z immediately began treatment, and within 10 minutes, this girl was moving around. Today, she is standing and eating on her own! She is only 6 weeks old, but will certainly have a full, wonderful life ahead! ♡

It didn’t take Piper long to lift Bella’s self-confidence. She soon found a forever home. “When I took her to her new home, I saw her play for the first time. She was playing with like 10 different toys at once and running around, and she was so happy. That was incredible to see because I’ve only seen the scared side of her. She’s feeling so much better, and she feels at home now.”

Thank goodness for the veterinarian’s accurate insight. They took their time and checked Bella over to see if there was anything that could be done for her other than euthanasia. Thanks to them, Bella is happy and has a beautiful home filled with lots of love and fun.