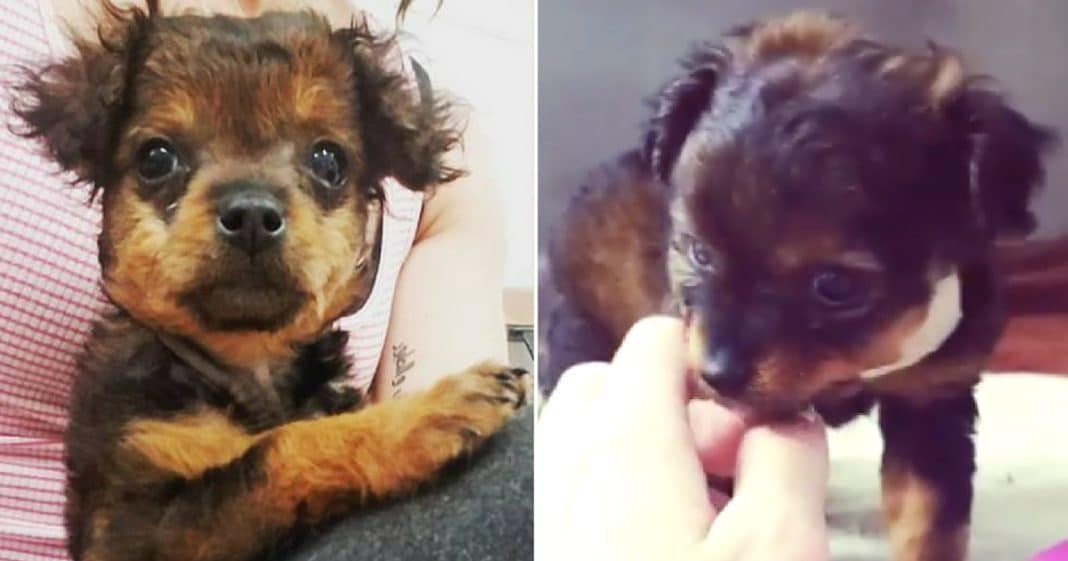 Some owners think nothing of surrendering their pets when there is something wrong with them. They abandon them, giving up on them before actually exploring what’s going on with their health or, in other cases, their behavior. They simply want to be rid of them.

People go to shelters looking for the cutest and most perfect puppy or kitten. Once they spot an imperfection or a problem, though, they make the animal someone else’s problem.

This happens all too often. These abandoned pets are taken to veterinary hospitals or animal shelters where they must wait to find a forever home. Some are lucky, but others are not.

Bo (now named Bella) was just 6 weeks old when her previous owners noticed something wrong with her. She could no longer walk. They thought Bella was paralyzed, so they took her to the vet and requested that she be put down.

Before any procedure or tests were conducted on the puppy, the family left. They didn’t want to witness their dog being put down. They gave up on her.

The vet, though, wasn’t so ready to follow their wishes. She wanted to see what was going on with Bella. The staff performed tests to see what was causing her paralysis. Once the results came back, the solution left the staff ecstatic.

Bella was hypoglycemic. The primary source of energy in both humans and animals is sugar, which takes the form of glucose. When someone is hypoglycemic, they have low levels of glucose in their system, or a “low blood sugar concentration.”

Bella’s cure came in the human form of Piper Wood, the founder of Hand in Paw shelter. Piper commented on what could have caused the hypoglycemia: “Maybe they weren’t feeding her enough, and her blood sugar was too low,” she said about the pup’s former family.

Bella was given an IV and quickly began to regain her strength.

“It was a pretty simple fix,” said Wood. “A couple of IVs, some fluids and she was fine. It probably cost less than euthanasia.”

But while Bella was on the mend, she was frightened of people. She shook and was quite shy. The vet clinic who treated Bella wrote on Facebook: “Look at our new baby, Bo! Her former owners brought her into our vet yesterday. They said she was paralyzed. They stated that they didn’t want her, immediately signed her over, refusing any treatment (except euthanasia), and just left! Dr. Z immediately began treatment, and within 10  minutes, this girl was moving around. Today, she is standing and eating on her own! She is only six weeks old, but will certainly have a full, wonderful life ahead! ♡”

With Wood’s love and tender care, Bella gained her physical strength and confidence. And, in no time at all, she found her real forever family.

“When I took her to her new home, I saw her play for the first time. She was playing with like ten different toys at once and running around, and she was so happy. That was incredible to see because  I’ve only seen the scared side of her. She’s feeling so much better, and she feels at home now,” said Wood.

We don’t want to imagine where Bella would be if the vet had listened to the people who left Bella with them. We’re so thankful they had the insight to not jump to conclusions. They had the foresight to run the proper tests to see what was going on with the little pup.

Were you happy that this vet didn’t dismiss Bella and ended up saving her life? So share this!