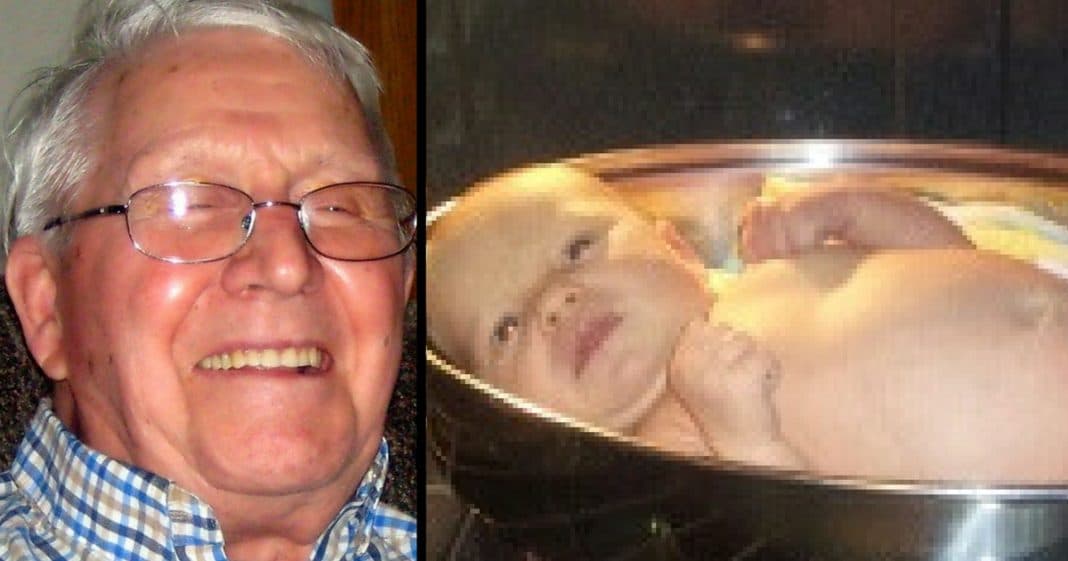 Most of us know at least one very overprotective parent. This is the mom who packs up and leaves the party when their baby makes the slightest noise, or the dad that makes you surround yourself with 30 pillows before you can hold the baby.

It’s understandable – these babies are precious cargo and parents can’t bear the thought of anything bad happening to them – but sometimes these parents can take things a little far.

That’s at least what this grandfather thought when his son left his baby daughter in his care for the first time! He figured he had done a good enough job raising his own kids that his son would trust him with his granddaughter, but as he soon found out, it wasn’t that simple.

As many parents can remember, the first time you leave your child can be incredibly nerve wracking. This new dad kept calling in to check on the baby and make sure everything was okay, so Grandpa decided to have a little fun.

The next time he got a text from his son, he replied with this picture.

My first time leaving her, and Dad decides this is the picture to send.. (x-post from r/parenting)

“My first time leaving her, and Dad decides this is the picture to send,” the son said later when he shared the photo on Imgur.

He may not have found it very funny at the time, but at least the son eventually had a sense of humor about it!

There were some who saw the photo and thought it was inappropriate, but most people got a kick out of it and several even decided to join in on the fun.

“I understand your concern; there’s not nearly enough gravy on that child,” one commenter joked, “plus there should be tinfoil to avoid burning the top.”

“[H]e’s not done yet, his belly button hasn’t popped up yet,” another laughed.

One commenter even had some helpful suggestions for the new dad:

If nothing else, this funny photo will be a cherished memory to laugh over and a good conversation starter for years to come!

Did you enjoy this grandpa’s practical joke as much as we did? So share this!