He Overhears Women Saying Racist Things About HIM. What He Does Next Leaves Them Speechless 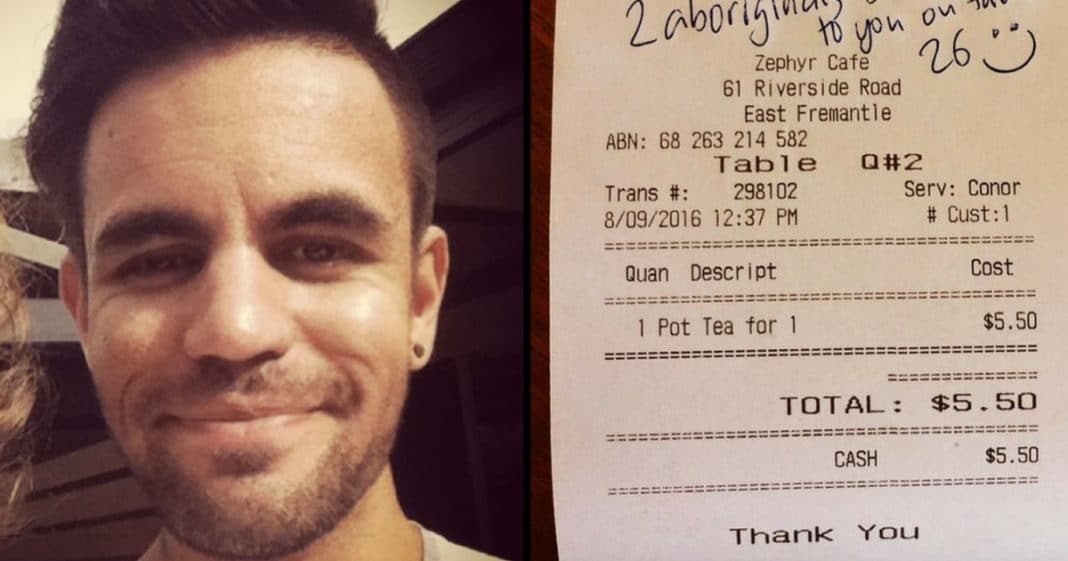 You would think that in this day and age racism would be a thing of the past, but unfortunately, it is clear that hate and prejudice still abound in the hearts of many people around the globe.

It can be disheartening to see, and it sometimes feels like such an insurmountable problem that it is impossible to tackle.

While it might not be possible to immediately irradicate racism around the globe, we can do our part to speak out when we see it and, in a small way, make the world a better place.

That’s exactly what Jarred Wall did when he overheard some women talking while he was at lunch.

Jarred is an Australian who is aboriginal. Unfortunately, there is still a lot of prejudice against aboriginals in Australia and, as Jarred listened, the two elderly women said a lot of things that had his ears burning.

“Food was great but to our misfortune we inadvertently heard two elderly ladies, seated next to us, chatting about aboriginals,” he wrote in a Facebook post. “The conversation was less than distasteful with words like assimilation thrown around willy nilly.”

Assimilation refers to policies the Australian government had in place up until the 1960s that attempted to eliminate the indigenous people entirely. “Full-blood” aboriginals would be allowed to die out in a process of natural elimination, and “half-castes” – a derogatory term for people of both indigenous and white parentage – were encouraged to assimilate into the white culture, in the process destroying any links to their aboriginal heritage.

The practice was horrible, distasteful, and cruel – the epitome of racist hatred. And while the country has come a long way from those days, it is obvious there are still many people holding onto those racist ideas.

When Jarred heard what the women were saying, he was deeply wounded, but he decided that instead of unleashing a “tirade of abuse” on the women, he would be the better person and repay their hurtful words with kindness.

He purchased a pot of tea for the women and then left them a note on the receipt.

“Enjoy the tea!” he wrote. “Compliments of the 2 aboriginals sitting next to you on table 26. :)”

Jarred said he didn’t want to embarrass the women – he just wanted to do something that would make them stop and think and hopefully help change their way of thinking.

“They were elderly ladies, I didn’t want to humiliate anyone or cause conflict,” he said.

Since Jarred posted his story, it has been shared thousands of times and many people have written to say how impressed they were with the way he handled the difficult situation.

What Jarred did that day may have been a small thing, but its effect has been felt all over the world and his act has touched thousands of lives as a result.

Jarred said he just hopes that what he did will help those ladies – and everyone else who hears the story – let go of their hate and learn to treat everyone with kindness and respect.

“Maybe these ladies will be a little wiser and think before they speak,” Jarred wrote. “Hopefully there won’t be a next time!”

Were you impressed with the way Jarred handled this difficult situation? So share this!