She Orders A Second Beer In Honor Of Fallen Soldier, But Then She Looks Down At The Bill 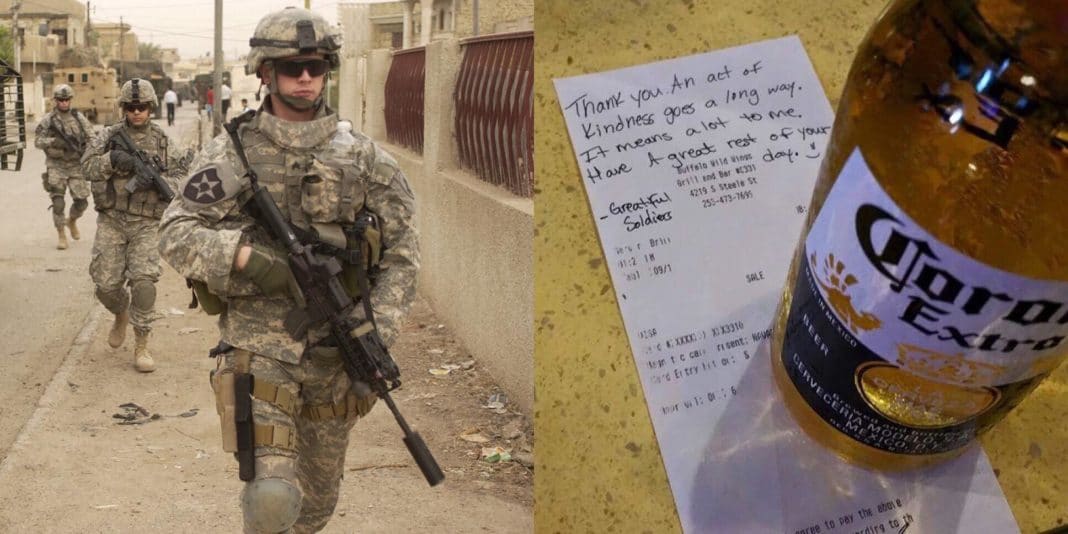 Those who serve in the military form a unique, unbreakable bond; one that a civilian can’t fully grasp. They’ve fought together and seen things none of us can imagine. And for those who’ve died, their fellow soldiers always do what they can to honor their memories.

Whether it be holding a religious service, establish a memorial or order a beer for them at a bar. That’s what one veteran did for her fallen brother in arms.

37,000 American Flags, in remembrance of fallen Massachusetts soldiers, are being planted in the Boston Common today. ‬photo by: @bostontweet‪

Brian Avey works at a Buffalo Wild Wings in Washington state. One afternoon, a military woman and her friend were seated in this section. The woman ordered two beers, a Blue Moon and a Corona. Because of company policy, Avey could only serve her one beer at a time.

He explained this to her; then the woman told him something that affected him profoundly. The second beer wasn’t for her but a fallen soldier. It was for her brother; now whether she was referring to a sibling or her “brother in arms,” who had died in Iraq, Avey didn’t know which.

Avey was moved by her story. He opted to go against company policy to brighten her day: “I’ve never seen that happen before, and it touched me,” he said.

He brought her both beers. The Corona sat at the other end of the table while she ate her meal. When it was time for her to pay the bill, Avey had the distinct pleasure of telling her that Buffalo Wild Wings would be covering her fallen comrade’s drink.

A Military Woman came into my work today for Lunch, she ordered a Blue Moon and a Corona, I told her she could only do…

To show how thankful and touched she was by the company’s gesture, the woman left a note on the receipt: “Thank you. An act of kindness goes a long way. It means a lot to me. Have a great rest of your day. — Grateful Soldiers.”

After she left, Avey didn’t want to discard the unopened beer. Inspired, he came up with an idea for what to do with the fallen soldier’s drink. He placed the beer atop a cooler beside an American flag for another fallen soldier.

Just to be sure what he did was all right, he asked the restaurant manager, Dan Banale. His boss requested one thing: “Just do me a favor,” the manager said, “put a fresh lime in it every morning.”

Since that day, the restaurant has been flooded with hundreds of calls thanking them for the kind gesture.

“At first it was just for her and her brother, but now it has become a memorial for all fallen soldiers,” said Banale.

The beer was displayed in a glass beside the flag. As requested, Avey replaced the lime every morning