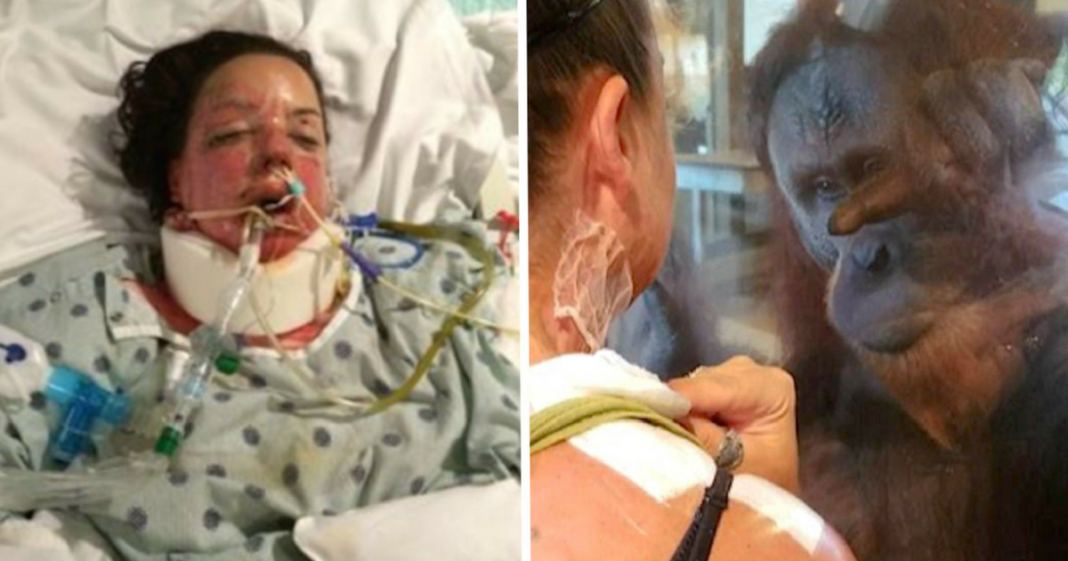 In 2015, Darci Miller was outside her Indiana home burning trash when she was engulfed by gas flames. She suffered severe burns on her chest and arms.

She was treated at a local burn center. One day, Darci and her fiance, Jason decided to blow off some steam and have some fun. They headed to the Indianapolis Zoo where they hung out in the primate exhibit.

While there, the couple noticed one of the orangutans taking particular interest in Darci’s numerous bandages. The primate was 12-year-old Rocky. He left the group he was with and headed to a secluded window. Darci and Jason followed.

There, with a barrier of thick glass separating them, Rocky continued to study Darci. He wanted to get a closer look at her bandages.

Darci moved nearer to the glass. “He wants you to show him,” Jason said. “That’s crazy! He wants to see it.”

The camera captured this remarkable moment as primate and woman silently interacted. Darci peeled back her bandages; rocky pointed at her scars and wounds. He pressed himself closer to the window. This went on for twenty minutes or more. Jason even pulled out his phone to record their interaction. Other zoo goers took notice and watched.

According to zookeepers, Rocky is indeed a curious ape. He was attempting to communicate his interest and concern for Darci. How sweet.

Watch the video below and see for yourself how much Rocky was into examining Darci and her wounds.