Off-Duty Cop Sees Elderly Vet On Road. When He Tells His Story Cop Breaks Down In Tears 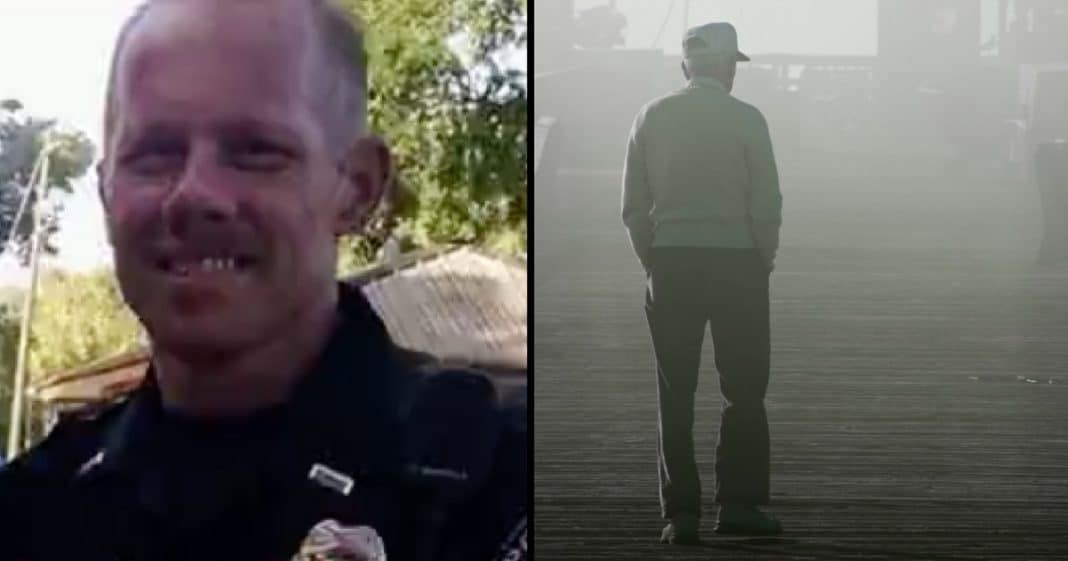 Our veterans have given so much for this country. They were willing to sacrifice everything just so that we might be free.

But all too often, once they return home, they get forgotten. People don’t give them the honor and recognition they deserve.

That’s why we love hearing and sharing stories like this one. Hopefully it will inspire people to seek out veterans and give them the respect they deserve!

Off-duty Alabama police Lt. Charles Plitt had been running some errands and was driving home when he saw something that made him stop. An elderly gentleman, who Plitt guessed was in his 80s, was walking down the side of the highway.

Plitt said the man was well-dressed, but he looked exhausted. When an 18-wheeler flew by, the “wind almost knocked him over.”

Plitt had just stopped at a stop sign and the man was starting to cross the road in front of him when he paused, looked up at Plitt, and raised his finger as if to tell him to wait a minute.

The officer rolled down his window and asked the man if he was okay, and that’s when the elderly gentleman told Plitt something that broke his heart.

The man explained that he was trying to visit his wife, who was in a nursing home, but he had recently had a stroke and didn’t think he was going to make it.

“He didn’t look like he was in distress,” Plitt recalled, “but he looked defeated.”

Even though he has a strict rule about picking up hitchhikers, Plitt knew this man, whose name he soon learned was James, was different. He told James to get in his car and had him point out the way to the nursing home.

On the way there, James told Lt. Plitt some of his story. His wife, whom he called “the most beautiful woman in the world,” has dementia and stays in a nursing home. James goes to visit her as often as he can, and he is the only person she knows and will respond to.

Unfortunately, James’ car had broken down and he hadn’t been able to go see her in over a week. The couple had talked on the phone and wanted to be together, so James decided he was going to make it work, even if it meant walking all those miles to get to her.

James also told Plitt that he was a veteran. He had served 22 years in the U.S. Army before retiring.

As Plitt thanked him for his service, James told him about some of the wars he had fought in, and then the elderly veteran began to sob.

“None of my friends made it back from the war,” he said.

“All I could do is listen and try not to tear up myself,” Lt. Plitt recalled. “After he stopped talking I looked over and he was still crying. I patted his hand and I told him ‘well, I’m glad YOU made it back…and I’m sure your wife is glad too.'”

At that, James’ demeanor changed. “Yes she is….she sure is!” he smiled.

As they pulled into the nursing home, James wiped his tears away and shook Plitt’s hand before pointing to a window right in front of where they were parked.

“You see that window with the shades pulled back?” he asked. “That’s my wife’s room. She’s gonna be so happy I’m here!”

Plitt said that James seemed to get a burst of energy as he hurried inside to see his wife.

As Plitt drove home, he couldn’t stop thinking about James and he knew he needed to share his story.

“Yes, I helped someone out in a time of need, but I was able to help James out because he, like so many other men and women in this country fought to protect my freedom and liberty.”

“Memorial day is not a ‘holiday’ by the standards or definition that society places on a holiday,” he continued. “Memorial day is a day of remembrance. It’s a day we honor and pay tribute to the many brave men and women who have fallen.”

While many of us spend our Memorial Days grilling and hanging out by the pool or on the beach, Plitt reminds us that there is much more to the holiday than a day off of work.

“[Memorial Day is] more than that….much more, much bigger than that,” Plitt wrote. “James is one of many living testaments as to what really matters on this Memorial day weekend. Reflect on this for a while. I know I sure will.”

Plitt is putting his money where his mouth is, so to speak. After dropping James off at the nursing home, he started coordinating an effort to get the veteran’s truck back up and running so he can easily get back and forth to see his beloved wife.

As we continue on with our daily lives, it is so easy to forget those who have gone before us and have given so much for us. Lt. Plitt’s heart-wrenching story about James is a good reminder for us to look out for those people, especially those who need our help.

The elderly especially often get forgotten and cast aside, and that should never be! Let this story be a reminder for all of us to go out of our ways to show honor and respect to those who are so deserving.

Do you want to see our veterans get the proper honor and respect they deserve? So share this!