Nurse Spots Suitcase On Side Of Road, Makes Unexpected Discovery When She Looks Inside 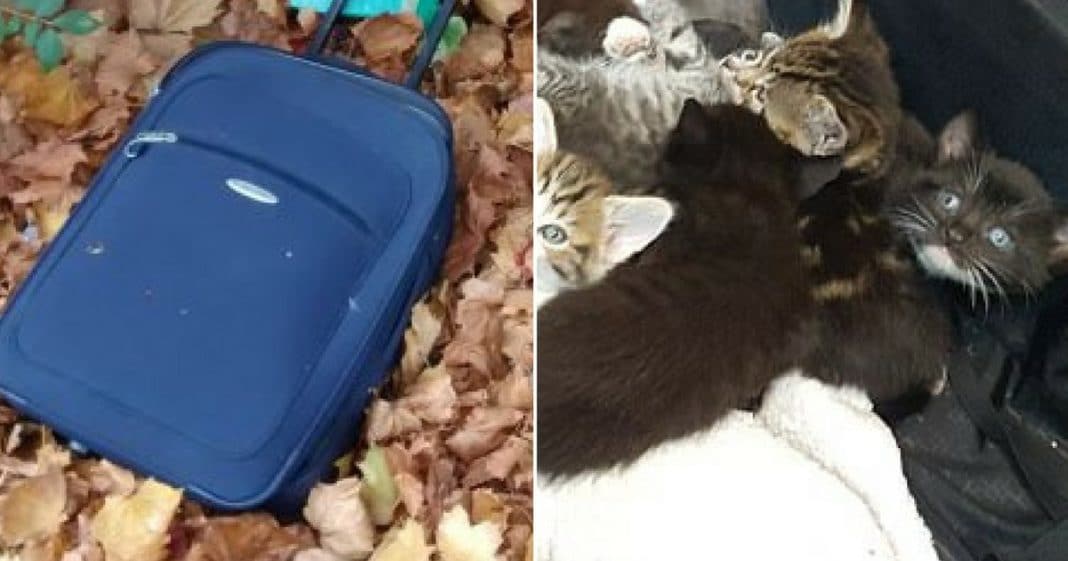 One veterinary nurse in the U.K. was on her way to work when she noticed a suitcase lying on the side of the road. Something didn’t seem right about it so she decided to check it out, and what she found left her stunned.

Stuffed inside the suitcase were 15 tiny kittens, thought to be between three and five weeks old. Small holes had been poked into the suitcase so they could get air.

Thankfully they were found by just the right person! The nurse took them to the veterinary hospital where she worked and they are now being cared for by volunteers from Cats Protection’s Hornchurch and District Branch.

The kittens are believed to have come from up to four separate litters. And while we may never know the exact reason a person decided to dump them on the side of the road, Alison Gambles, the Cat Protection branch’s Welfare and Homing Officer, guesses the person may have felt overwhelmed and trapped.

“Someone must have felt in a very desperate situation to do this,” she said. “They seem to have intended the kittens to be found as the suitcase had been left near the home of the veterinary nurse, who is well known locally.

“Either someone’s own cats had been breeding out of control, or someone had been trying to breed kittens for profit – we’ll never know the full story here.”

Six of the kittens had eye infections, but seem to be doing better now. Thankfully none of them had any more serious conditions.

“With kittens this young and vulnerable, the outcome could have been awful,” Alison said.

All of the kittens already have homes lined up and will be cared for by loving and attentive volunteers until they are ready to go be with their forever families, but Debra Teo, the head vet at Vets4Pets in Dagenham, where the kittens were initially taken, says they all would have been better off with their mothers.

“Every single kitten would have benefited from a few more weeks of care, attention and nutrition provided by its own mother,” she said.

Debra and Alison are now appealing to the kittens’ owners, wherever they might be, as well as anyone else who owns cats, to spay and neuter their pets to avoid a similar situation in the future.

“We are pleading with all cat owners to have both male and female cats and kittens neutered,” Debra said. “The current situation could so easily have been averted and also could have easily ended up being a tragedy.”

Were you happy to see these kittens rescued and given new homes? So share this!