She Notices Teen Is Running ‘Funny,’ Then He Shows Her His Phone And It All Makes Sense 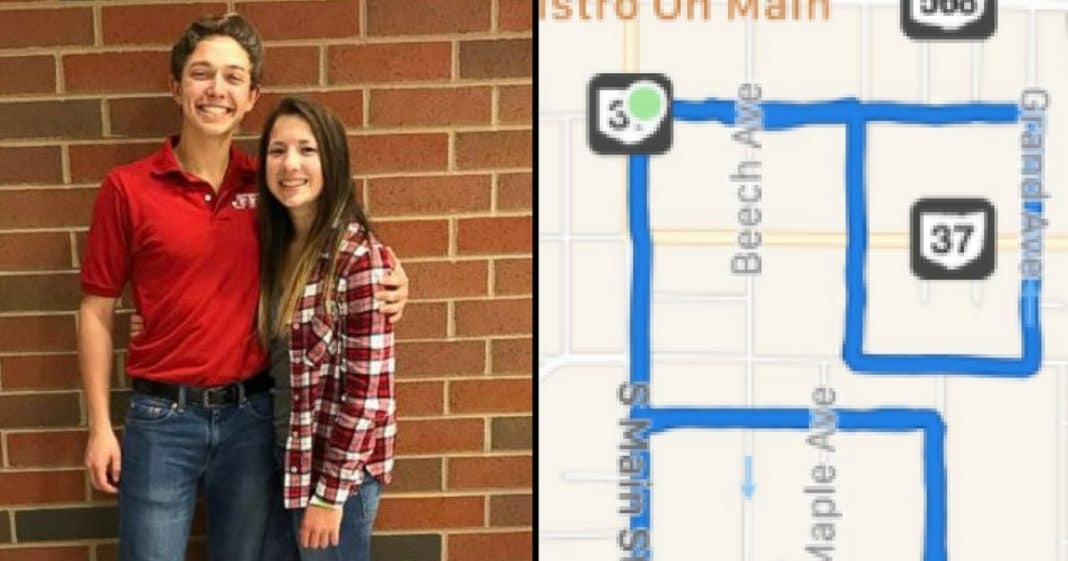 Remember the days when a guy just asked a girl he liked if she wanted to go to a dance with him and she said “yes” or “no”? Well, those days are long gone.

Nowadays guys try to outdo each other with elaborate asks. It makes you wonder how they’re going to top those prom proposals when it comes time for their marriage proposals!

While some of the “promposals” can get a little outlandish and out of hand, we think this one is actually pretty sweet.

When 17-year-old Joran Fuller was trying to think of a way to ask out his girlfriend, Claire Short, 16, he got an idea based off of what he had seen people do on a running app he uses.

The app, Strava, records athletes’ runs or cycles on a map so they can see where they went as well as how far they went.

“I’d seen on Strava some different Strava art things where in big cities cyclists would map out these big elaborate designs,” Joran said. “That inspired me a little bit.”

He decided that, instead of an elaborate design, he would use the tracker to spell out a very important question.

After his run he went over to Claire’s house with some flowers and pulled out his phone. The 5.5 mile route he had done spelled out, “Prom?”

But did your prom date run 5.5 miles to ask you pic.twitter.com/1cp2R2IvTp

She shared her boyfriend’s sweet gesture on Twitter, where she thought their friends might see it. She never anticipated, though, that the promposal would go viral, garnering hundreds of thousands of “likes” and “retweets” in a matter of days.

“I had no idea it was going to get that big,” Claire said.

“The reaction was really cool and unexpected,” Joran added.

The pair said that in addition to their social media fame, they are also receiving a lot of attention at school.

Joran’s father, Tony Fuller, said he is happy to see his son recognized for what he did, but added that Joran’s sweet ask didn’t surprise him in the least.

“He likes to do little things like this and he’s never really looking for a big reaction,” Tony said. “It is kind of cool that he’s getting a little recognition for being a gentleman and being kind. That certainly makes me proud as a father.”

Did you love this sweet “promposal” as much as we did? So share this!