He Notices Elderly Man Pushing Food Cart In Hot Sun, That’s When He Makes His Move 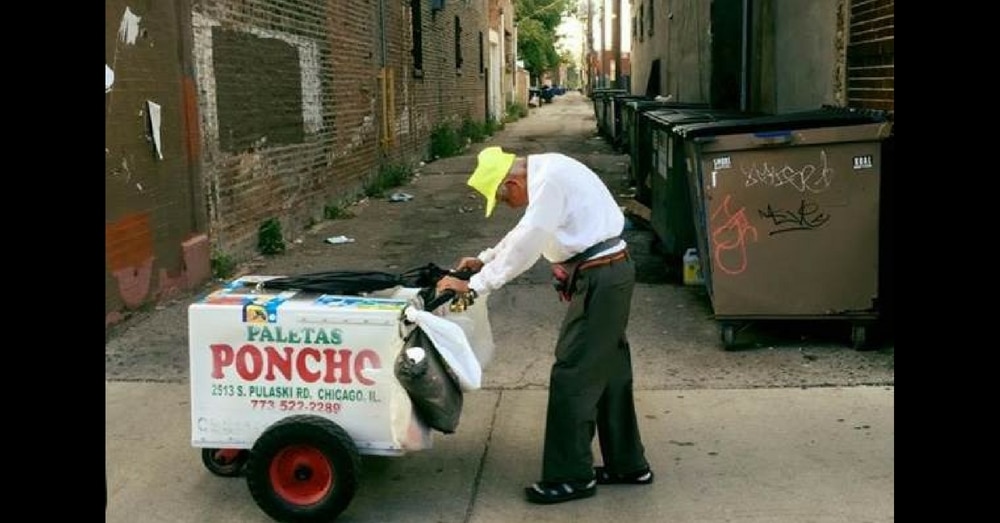 Restaurant owner Joel Cervantes Macías was visiting his hometown of Chicago when he noticed an elderly man pushing a cart to sell paletas, which are Mexican-style popsicles made with fresh fruit juices and chunks of fruit. He couldn’t believe that a man of his age would be out working so hard in the hot sun, so he went over to talk to him.

He found out that the man’s name was Fidencio Sanchez and he was 89 years old. He and his wife had recently lost their daughter and he had been forced out of retirement to help make ends meet.

Joel felt a lot of empathy toward Fidencio and wanted to help him out.

“Maybe, subconsciously, because I’m in the service industry, and he is too, it just broke my heart,” Joel said. “He shouldn’t really be selling anything anymore. He should be enjoying retirement.”

Joel ended up buying $50 worth of paletas, leaving Fidencio stunned. Usually he only makes $50 to $60 in an entire day.

Joel went on his way, but he couldn’t get Fidencio out of his head. He decided he had to do something more to help this hardworking man, so, at the suggestion of a friend, he started a GoFundMe with a goal of raising $3,000.

When he checked the account a little while later, he couldn’t believe his eyes. In just three days the account raised over a quarter-million dollars!

Both Joel and Fidencio were overwhelmed when they saw how much people had donated. At first, Fidencio didn’t even believe it!

“When people first approached him to tell him about the money, he said, ‘Oh it’s a bunch of lies’ — he didn’t believe it,” Joel said. “Even I, when I woke up the next day and saw how much money was raised—I was shocked!”

Their story has since gone viral as Fidencio’s hard work and determination and Joel’s generosity and compassion have captured people’s hearts all over the world.

Joel’s sister, Erika Cervantes Macías, said their family has been surprised at the amount of attention the story has received, but there’s one thing that doesn’t surprise her, and that is Joel’s act of kindness.

“One random day, a homeless man came in [to the family restaurant] and only had a couple of bucks. My brother told the staff, ‘It doesn’t matter if he can’t pay, let him order whatever he’d like.’ His heart is enormous,” she said.

Money continues to pour into the account. Fidencio says he plans to buy a modest home with some of the money and put the rest in a security or trust to cover taxes and living expenses.

Were you touched by Joel’s act of kindness toward Fidencio? So share this!