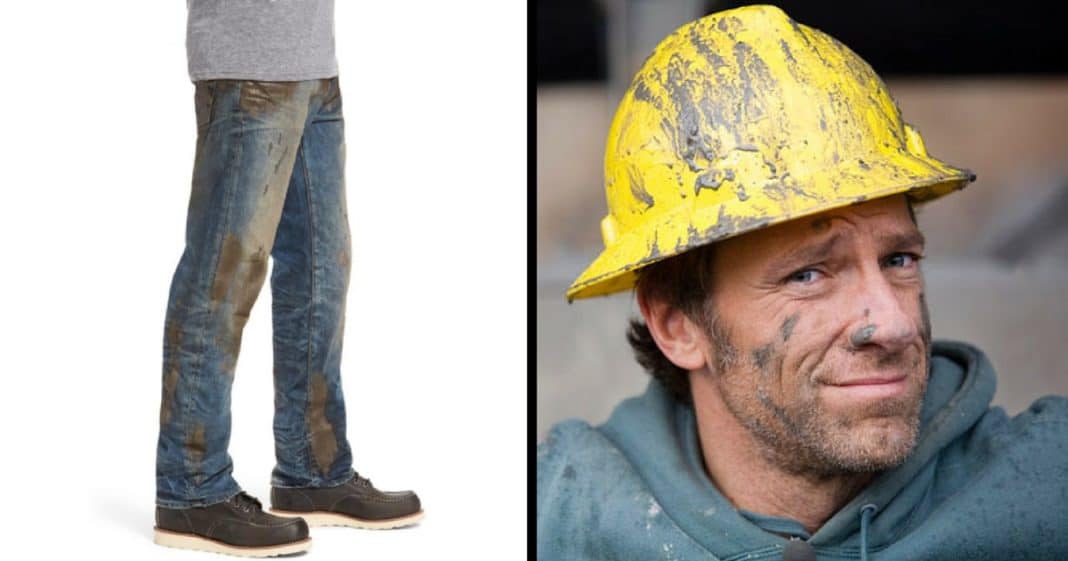 Popular retailer Nordstrom has received quite a bit of flack recently for some of the… we’ll call them “interesting”… items they have been offering in their stores. There was the stone in a leather pouch they tried to pass as a paper weight, and the infinitely mockable “Clear Knee Mom Jeans” that had people everywhere scratching their heads.

But they may have just outdone themselves with their latest offering. Their latest head-scratcher is a pair of men’s jeans that come caked in dirt. The website says they “embody rugged, Americana workwear that’s seen some hard-working action with a crackled, caked-on muddy coating that shows you’re not afraid to get down and dirty.”

The irony of shelling out a small fortune for a pair of pants that looks like you just took a roll in the mud was not lost on anyone, least of all “Dirty Jobs” television show host Mike Rowe.

Rowe, who has made a living showcasing the dirty jobs that most people tend to overlook, had some choice words to say about the ridiculous jeans, calling them an assault on work.

“This morning, for your consideration, I offer further proof that our country’s war on work continues to rage in all corners of polite society,” he wrote in a Facebook post. “Finally – a pair of jeans that look like they have been worn by someone with a dirty job…made for people who don’t. And you can have your very own pair for just $425.00.”

For a man who has worn through his fair share of jeans after hard days of actual work, Rowe says he has a hard time wrapping his mind around the trends of faded jeans and jeans that have been ripped to shreds. But these jeans take things to another level.

“[F]orget the jeans themselves for a moment, and their price, and look again at the actual description,” he wrote. “‘Rugged Americana’ is now synonymous with a ‘caked-on, muddy coating.’ Not real mud. Fake mud. Something to foster the illusion of work. The illusion of effort. Or perhaps, for those who actually buy them, the illusion of sanity.

“The Barracuda Straight Leg Jeans aren’t pants. They’re not even fashion. They’re a costume for wealthy people who see work as ironic – not iconic.”

While America was built on the backs of those who worked hard for what they got, our culture has transformed into one of lazy entitlement. We only want to look like we’ve put in the hard work, not actually do it.

For Rowe and the millions of Americans who still do work hard to earn a living and provide for their families, clothing like this is just insulting.

Not one to miss an opportunity, though, Rowe has an idea for Nordstrom’s next pair of fashion jeans:

“[M]ight I suggest the revolutionary new ‘Borax Wash,’ which I discovered some years ago while rescuing birds who had the misfortune of falling into Searle’s Lake in the lovely and picturesque town of Trona,” he wrote.

“If Nordstrom’s wants to carry them, the description would read something like this:

“’Finally – a pair of jeans for the hard-working gent who doesn’t want to actually wear them. The Borax Wash is so rugged and so manly, they don’t even need a human to hold them up! So sit back and relax, secure in the knowledge that your work pants can’t be folded or stored like other jeans. Show the world you mean business by owning the only jeans that can’t be worn! The jeans, that can stand on their own!’

Do you agree with Mike Rowe? So share this!