NFL Star Stops To Meet Fan With Down Syndrome. But It’s What He Does Next That Has People Talking 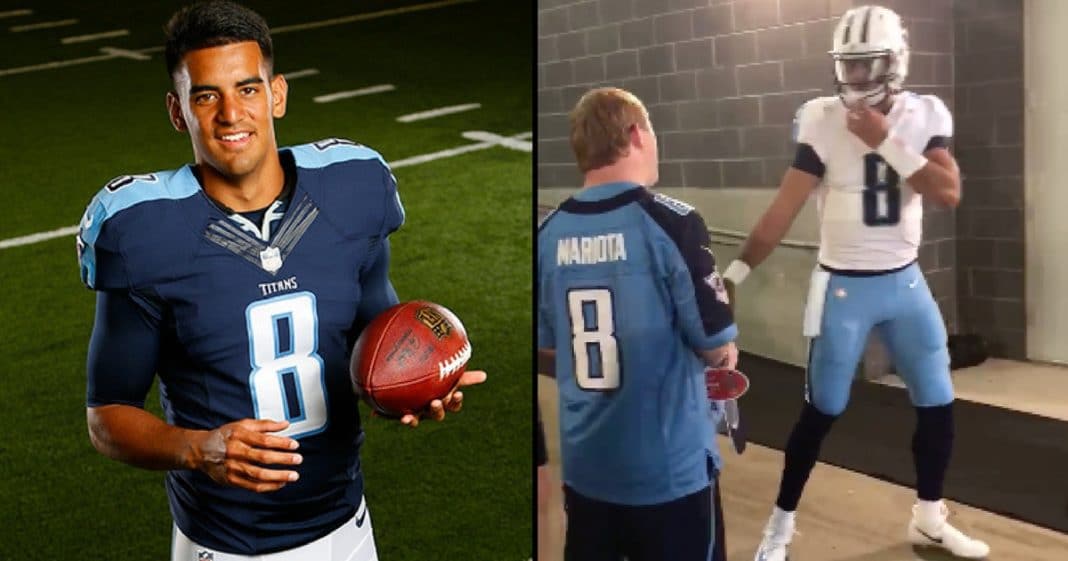 Whether they deserve it or not, athletes get a lot of praise and attention in our society. Kids look up to them, hoping to follow in their footsteps someday; fans proudly wear their jerseys and scream their names during games; sports news anchors shower them with praise during after-game interviews; franchises pay them unfathomably high salaries for their talents.

Unfortunately, a lot of these athletes don’t live up to the “hero” status we give them. We often read stories of athletes who cheat on their spouses, disrespect their country, or engage in acts of violence.

It can be devastating – especially for kids – to watch heroes fall. That’s why we always love to hear stories of athletes who take their position in the public eye seriously and display good character and qualities to admire.

Marcus Mariota is one such player. The 23-year-old Tennessee Titans quarterback is one of the best in the NFL, but he has not allowed his success to go to his head. In fact, he is famously shy about discussing his own success and accomplishments.

As a college player at the University of Oregon, Mariota was heavily involved with the Boys & Girls Club of Emerald Valley in Eugene. The children there didn’t just see him as a star player, but as a friend, brother, and mentor.

Since moving east and joining the Titans, Mariota has proven that fame and fortune won’t change him, and a video that has recently gone viral shows just that.

After fracturing his fibula last season, Mariota was ready to retake the field at Saturday’s preseason game against the New York Jets.

As the team walked through the tunnel toward the field, a young man with Down syndrome – sporting a Mariota jersey – anxiously watched the players come in as he looked for his hero. When Mariota spotted him, he stopped to give him a hug and take a picture…but that wasn’t all.

As the rest of the team went on, Mariota stayed back to meet the boy’s family and take some more pictures. Then he gave his biggest fan another hug and talked to him for a little bit before leaving to catch up with his team.

These are the kinds of athletes we want to see more of – the ones who realize there are more important things than “The Game”; the ones who will take the time to show some extra love and kindness to an excited fan; the ones who show us what true character and leadership are all about.

That short meeting didn’t take much time or effort for Mariota, but it meant everything to this fan and his family.

Thank you, Marcus Mariota, for reminding us what true class, leadership, and kindness look like. You’ve gained some new fans in us!