Newlyweds On Difficult Trip See ‘Angel’ Cloud Spread Her Wings, Know ‘Everything Will Be OK’ 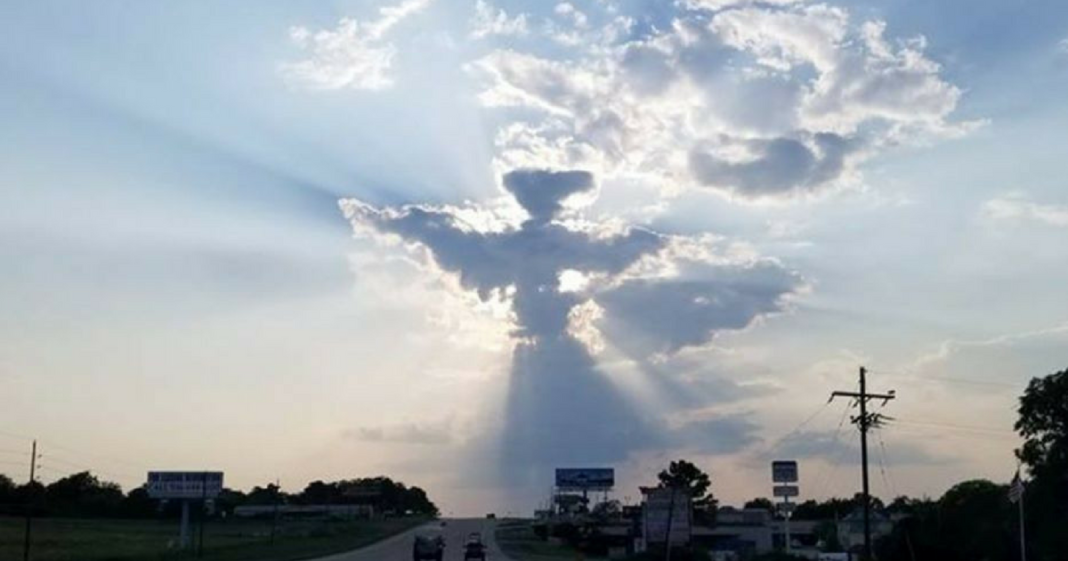 Sometimes, life is tough. No matter how hard we try to rectify our situation, we can’t seem to find the positive outcome to our problem. Then suddenly, events beyond our control occur and bolster our spirits, lightening our emotional load, giving us hope that our situation isn’t as troubling as we originally thought.

A Texas newlywed and his wife experienced this very thing while out to run errands they dreaded. Danny Ferraro and his wife, Carmen were driving down Highway 105 in Montgomery, Texas when they spotted a cloud over the horizon that resembled an angel.

According to Fox News, Ferraro told WFTS that he was “en route to handle a situation that he wasn’t looking forward to,” but after he saw this incredible sight, he knew everything would be okay.

The 57-year-old has been married to his wife for a month. He says this cloud came into their lives at the right place and time.

“I immediately noticed the cloud formation and the brilliant rays of sun straight ahead of us, and I told Carmen, ‘Wow, look at that!’ We both saw the angel and felt it meant that everything would be okay,” Ferraro, of Montgomery, tells PEOPLE. “I just felt like God was saying, ‘I’m always with you.’ I don’t know how many others saw it, but I’m sure it meant something special to everyone who did.”

TEXAS ANGELThis was the sunset as we were driving down Hwy 105. How awesome is that!

The father of seven took a spectacular photo and shared it online. It’s since received over a thousand shares and likes. “We were at the right spot at exactly the right time,” he says. “I never thought [the photo] would get so many likes and responses and that it would bring comfort to some as well. I feel very honored and blessed to have captured this moment.”

Danny says seeing the cloud gave them hope as they celebrated their first month wedding anniversary. They’ve been struggling with some difficult times in recent weeks. The cloud provided them with a very sweet moment.

“We have literally been dealing with several different family matters since we stepped off the plane from our honeymoon,” he tells PEOPLE. “God can speak to us in many different ways and for that I’m thankful.”

HIGHWAY TO HEAVEN? This cloud formation was recently spotted in Texas