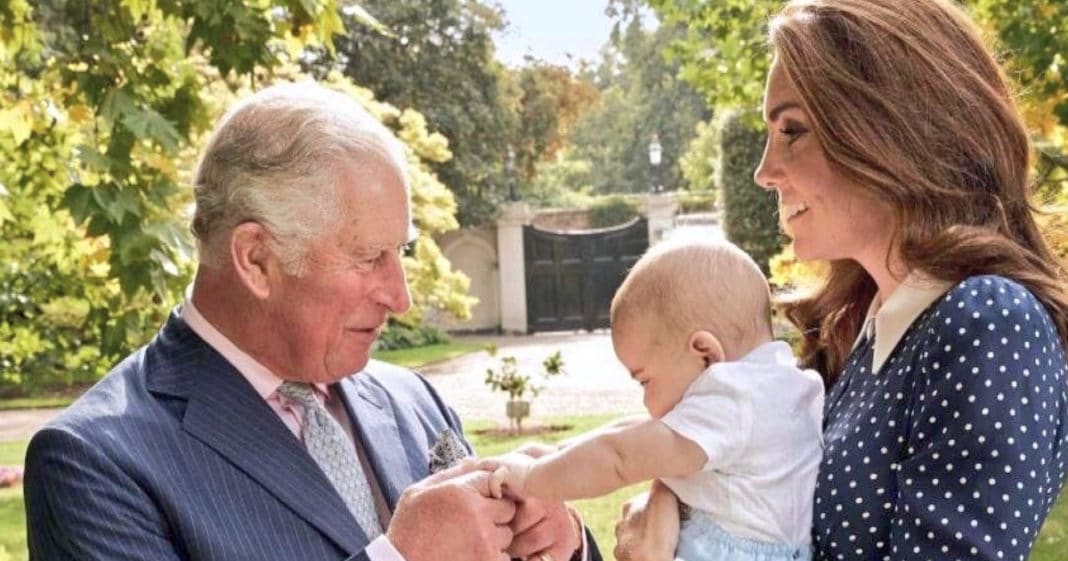 A new documentary created to celebrate Prince Charles’ 70th birthday on November 14 has given us quite a bit of insight into how the heir to the throne is seen by his grandkids. We shared the comments from Prince Harry and Prince William, explaining the habits that they admitted to picking up from their Dad. But buried in the documentary is another glimpse of Prince Charles interacting with his youngest grandchild, Prince Louis, when he was just five months old. It’s the first glimpse of the littlest Prince in four months.

The picture shows a doting Prince Charles holding hands with Prince Louis as Kate Middleton holds him. The shot was taken in September in the gardens at Clarence House, the official residence of Charles, the Prince of Wales.

Tucked away in tonight’s @BBCOne documentary on Prince Charles at 70 was a @ChrisJack_Getty picture of grandad with Prince Louis ? pic.twitter.com/S8zrZRMvQR

The last time the public got a glimpse of Prince Louis, who was born on April 23, we saw a radiant and smiling Middleton and Louis at his christening in July.

The Duke and Duchess of Cambridge have released an additional photograph taken following the christening of Prince Louis.

The Duke and Duchess hope that everyone enjoys this lovely photograph of Prince Louis as much as they do.

Before that, we saw the infant Louis in the arms of his big sister, Princess Charlotte.

Now another photograph has surfaced.

Fans of the Royal Family are always clamoring for more pictures of the Royal kids, including Prince Louis’ older siblings, Princess Charlotte, and Prince George. It’s surprising that Prince Charles gets any attention at all with so many cute royal grandkids, but the new photos show him in an endearing and completely informal role as Grandfather.

The documentary, Prince, Son and Heir: Charles at 70, show us that his five grandkids adore him. That number is about to reach six, as Prince Harry and Meghan Markle expect to introduce their own child.

Imagine Prince Charles reading Harry Potter to his grandkids while taking on different voices for the characters. It’s kind of hard to imagine, isn’t it? But that’s what he does. Now, he’ll soon have a sixth grandchild to read stories to. He’ll be in big demand. Prince William admits he’s been working “heavily” on his father to spend more time with the kids and less time working.

When he’s there, he’s brilliant,” William explained in Prince, Son and Heir: Charles at 70. “But we need him there as much as possible.”