Nervous Boy Slips Note To Officer. When Cop Sees It He Immediately Jumps Out Of His Seat 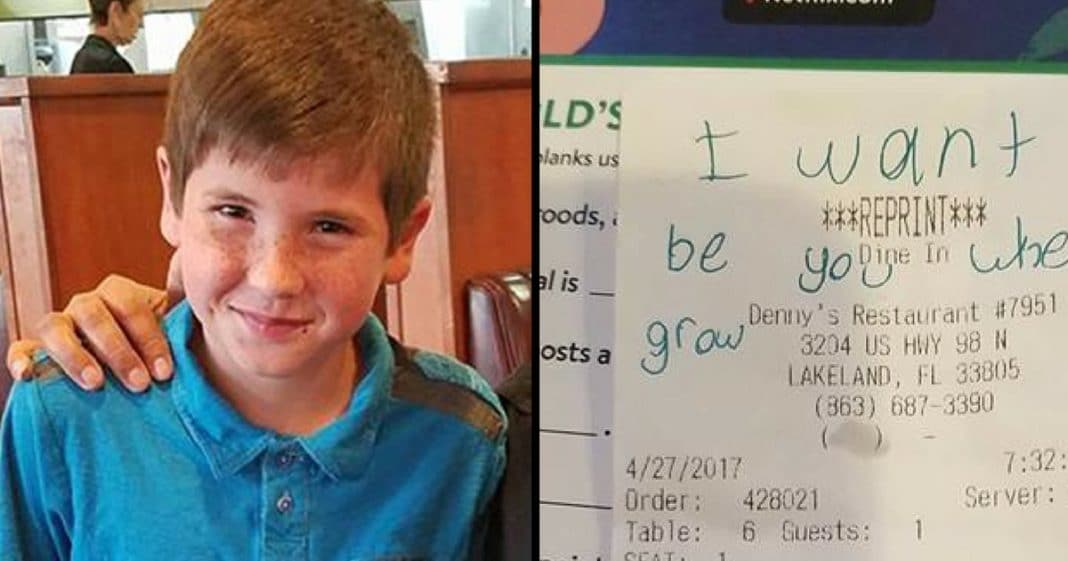 With all they see, it takes something pretty different to shock a police officer, but a nine-year-old Florida boy named Noah managed to do just that.

Noah and his mom were eating breakfast in a Lakeland, Florida, restaurant when in walked police officer Eddie Benitez. The little boy wanted to approach Officer Benitez, but he is shy and didn’t dare talk to him directly.

Noah’s mother, Amanda Cantin, could tell her son wanted to go over to the officer, but she wasn’t sure why. Then Noah told her he had an idea, but he needed her help.

Noah told her he wanted to pay the officer’s bill with his birthday money. With help from his mother and their waiter, Noah had Officer Benitez’s receipt in his small hands.

He then wrote a message on the back that read: “I want to be you when I grow up. Thank you for your service.” Dashing to the officer’s table, Noah set down the receipt and returned to his mother.

Officer Benitez picked up his receipt and read the note scrolled on the back. Emotionally moved by the youngster’s message, Officer Benitez hurried to their table. Later, Amanda and Noah recounted the surprise on the officer’s face as he read Noah’s note.

The officer thanked his admirer and requested a picture with him.

The Lakeland Police department shared this touching encounter between officer and young boy on their Facebook page. They wanted to honor Noah for his good deed and future aspirations.

Since the age of five, the little boy has wanted to be a cop. Noah knows what he wants in life, and he isn’t afraid to say it: “I’m going to make the world a better place and capture the bad guys,” he declared.

We think Noah’s gesture reaffirmed Officer Benitez’s faith in his job. Benitez spoke of what Noah’s actions meant to him: “It meant everything. It meant that I’m supposed to wake up every morning and put on this uniform and go out there and do what I do. You know? It means that I need to keep trying to be a good example to all these young guys,” he said.

We are so touched and moved by Noah’s kindness. He’s well on his way to becoming a good citizen!

Were you touched by Noah’s sweet gesture? So share this!