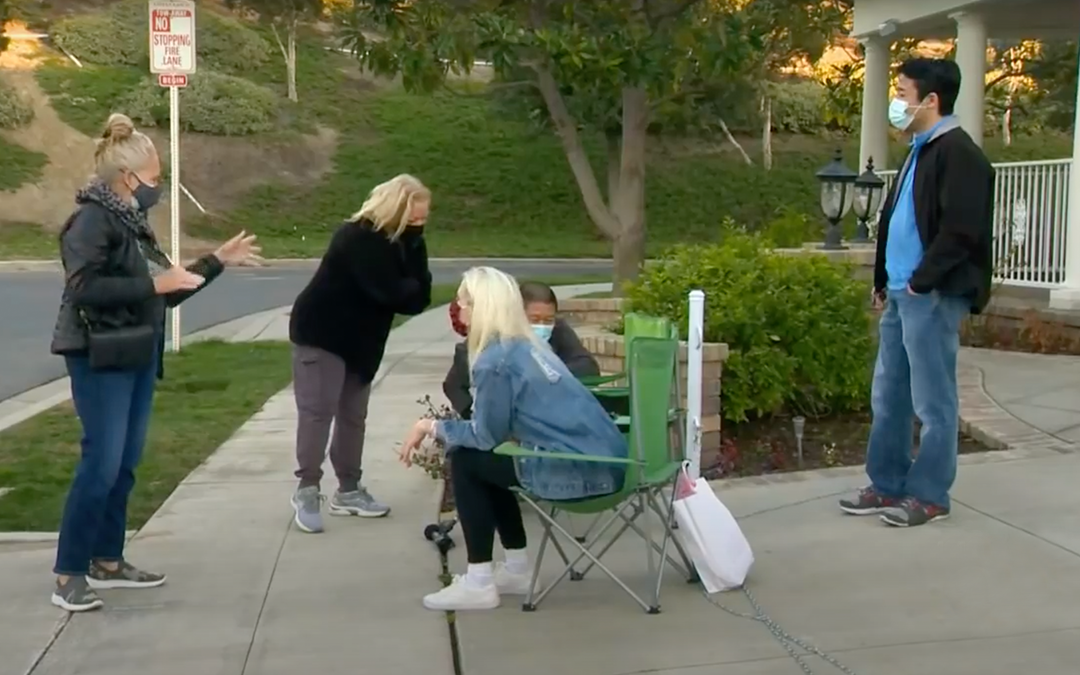 An Asian American family moved to the affluent Ladera Ranch neighborhood in California about six months ago. Immediately, a group of teenagers began harassing them as if they were taking turns. Running up to the house at night, they would shout racial slurs, throw rocks, and pound on the windows and doors.

“They yell, punch the door and windows, and ring the bell day and night,” said Haijun Si, 48.

Soon, the harassment got so bad his two children, ages 5 and 8, didn’t feel safe going to their bedrooms. So Si and his wife moved them into their room.

On the Lunar New Year, February 12, the family was celebrating when the teenagers interrupted again. So, instead of celebrating a time for new beginnings, they had to call the Sheriff’s office again.

Since the harassment started, Haijun Si installed a RING camera and a fence. Some nights, he and his wife stood guard outside, but the teenagers kept coming.

As the harassment continued, he called the police, but the teenagers wouldn’t stop. Then he began talking to a kind neighbor, Layla Parks, 30.

Parks was outraged to learn about the harassment against the Asian-American family.

“I did not understand the extent of the harassment and how often it was occurring,” she told the Post. “I was outraged, and I wanted to take action right away. But I knew I needed to do it carefully,” she said.

Taking to Facebook, Parks shared a video Si provided of the teenagers in action. Would anybody be interested in standing guard with her outside the home? she asked.

Soon, caring neighbors had filled up a sign-up sheet to volunteer for a shift between 6 p.m. until 12 a.m. Amazingly, the Post reports that 50 neighbors wanted to offer the Asian-American family some much-needed peace.

“It was more support than I had ever imagined or anticipated, and it is incredibly heartwarming,” Parks said” “The community has really stepped up.”

Every night since the day after the Lunar New Year, a rotating guard of residents has stood watch. Sometimes, they sit in lawn chairs outside the home. Other times, they walk the street with flashlights or sit nearby in their cars.

Finally, Haijun Si and his family can feel safe and have some peace.

As the neighbors come together, they created a “positive and hopeful sign” for the community.

Grateful for the help, Haijun Si and his wife bring cookies for the volunteers. Since they started their shifts, the teenagers’ harassment has subsided but not stopped entirely.

Meanwhile, the Sheriff’s Department has two investigators working to identify the teenagers.

Since the pandemic began, hate crimes and harassment against Asian-Americans have risen dramatically even as overall hate crimes were slightly lower.

Asian American rights advocates attribute the rise in hate to former President Trump’s rhetoric and the scapegoating of Asian Americans for the pandemic.

In one case, an 84-year-old man named Vicha Ratanapakdee died after being violently pushed to the ground by a 19-year-old suspect. Ratanapakdee, a grandpa out for his morning walk, lived in the San Francisco area and had just received his vaccine for COVID-19.

“This wasn’t driven by economics. This was driven by hate,” said a family member.

In Oakland, a 28-year-old suspect walked up behind a 91-year-old Asian man and threw him to the ground. The assault happened in broad daylight, and prosecutors charged the same man with two other assaults that same day.

Asian actor Daniel Wu was about to offer a $25,000 reward to find the suspect when he was arrested.

“Racist rhetoric from the pandemic has targeted us as being the reason for coronavirus,” Wu said during a news conference. “And so Asians across-the-board have been targeted, being pushed, attacked, spat on. Outside of San Francisco, in Los Angeles, and in New York, these incidents are happening all over the country.”

According to ABC News, another hate crime took place in Texas:

“[A] document, obtained by ABC News, detailed a March 14 incident in Midland, Texas, in which three Asian American family members, including a 2-year-old and 6-year-old, were stabbed … The suspect indicated that he stabbed the family because he thought the family was Chinese and infecting people with the coronavirus.'”

According to experts, hate crimes against Asian Americans rose by 150% in major US cities to the worst levels in a century. In San Jose, California, the cases increased by 162%.

Fortunately, caring people can help, as shown by the wonderful folks in Ladera Ranch. It’s time to stand against the hate and come together as we all work to stop the pandemic together.

See more about the horrific spike in hate crimes against Asian Americans from CBS Los Angeles: