Nearly 12 Years After Death, Steve Irwin Just Honored With A Star On The Hollywood Walk Of Fame 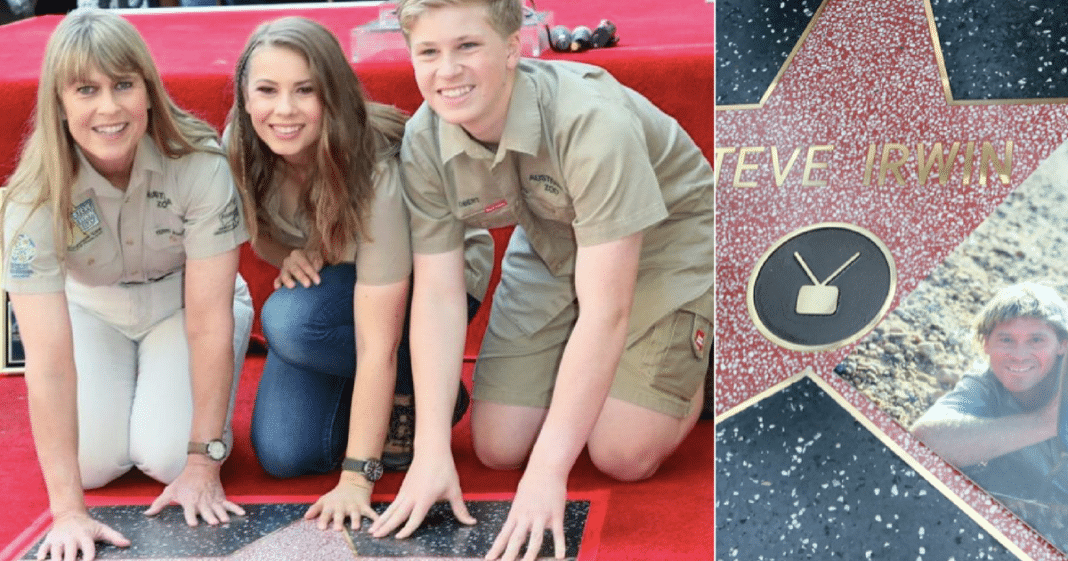 Crocodile hunter, passionate animal conservationist, and TV personality, Steve Irwin passed away in 2006 while filming a nature documentary. A stingray pierced his heart with one of its barbs, killing the 44-year-old father. On Thursday, April 26th, in a ceremony that was streamed live, Irwin was given his star on Hollywood’s Walk of Fame.

His widow, Terri, daughter Bindi and son Robert were all present at the event. They each gave speeches sharing their memories of Irwin. Bindi said this on Instagram. “Wear your best khaki and help us celebrate Dad’s life and legacy TOMORROW on the Hollywood Walk of  Fame. We are so excited to unveil Dad’s very own Hollywood Star. ?✨?”

The three were surrounded by friends, family members, and fans. “We try to continue dad’s legacy each and every day. I’m going to get a little bit emotional because it’s such a special day,” 19-year-old Bindi said during her speech, wiping away tears and hugging her mother.

“I have to tell you that I, never in my wildest dreams, imagined that this would become a reality,  and this is such an honor as a family to continue in dad’s footsteps … So thank you for being here today and supporting us.”

I’ll remember today forever. Such an emotional moment and beautiful chapter in our lives❤️

“And you know what? We’ll always be a family. So congratulations and woohoo,” Bindi added.

The trio next posed beside the star with a giant anaconda.

14-year-old Robert added that not only was he the “best and most incredible conservationist on the planet, but also the best dad.”

It was a huge honour to unveil dad’s star on the Hollywood Walk of Fame today! It is truly incredible for Dad’s message and everything he was passionate about to be forever remembered here. A big thanks to all of our great friends and Wildlife Warriors who attended the ceremony. One of the most amazing experiences I have ever had! ?⭐️

Terri shared a valuable lesson her husband taught her. “I have been so privileged to have had the biggest adventure with Steve. Every single day was like being in the middle of a cyclone. We never knew where we were going to go or what we were going to do,” she said. “I learned from Steve that everyone just needs to say yes to stuff. Take a page out of Steve’s book and love everything.”

Robert recalled his dad always saying ‘I don’t care if people remember me, I want them to remember my message,’ so receiving this star was a wonderful way to celebrate that message.

“And so to continue that and have that in the forefront of people’s minds, it’s really what he would have wanted. So it’s really great to celebrate everything that he loved and to get everyone really passionate about the cause,” Robert said.

In addition to receiving the Hollywood star, the Irwins will continue to honor Steve’s memory by promoting his efforts towards animal conservation. they have a new show that catalogs their conservation adventures called ‘The Irwin Family.’ You can see Bindi’s speech in the video below.