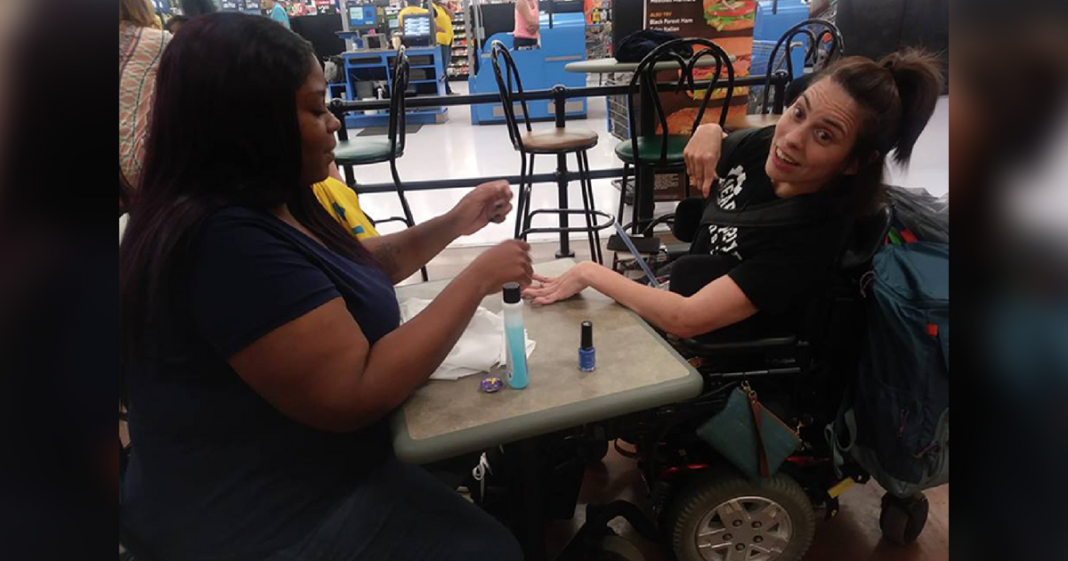 Everyone who enters a business is a potential customer. Whether they are living with a disability or not, the company is risking alienating consumers by refusing to accommodate or serve all who come through its doors.

I occasionally enjoy getting my nails done. Manicures allow me to relax and indulge in a little pampering. One woman from Burton, Michigan went to her local nail salon located in Walmart for a quick manicure. She was turned away. Tasia Smith works at the Subway in the same Walmart. She witnessed the kindness of one of her fellow employees, Ebony Harris toward this young woman and posted news and photos of her good deed on social media.

Da Vi NailsRemember the name and pass this on

“Today, this sweet girl went into burton Wal-Mart’s nail salon “Da Vi nails,” and they denied her service because ‘she moves too much’,” Smith wrote in a Facebook post. “Out of the kindness of the  Walmart workers hearts they went and bought nail polish and came into my work to paint this sweet girls nails. They were so patient with her (which she did great, barely moved & was just so sweet)… Thank you to the Walmart workers for making this beautiful girls day!”

“I just wanted to post it for awareness and appreciation, because people needed to know what was going on with the business and Ebony deserved all the appreciation she could get,” Tasia told  WJRT about the cashier who skipped her break so she could give the manicure.

Ms. Harris explained how she witnessed the nail salon refuse to provide service to the young woman because she has cerebral palsy. She knew she had to do something about it. “I just wanted to make her day special. I didn’t really want her day to be ruined. That’s why I did it,” Harris said.

“And you know, she moved her hands a little bit, and she kept saying she was sorry. And, I told her ‘don’t say that’. I said ‘you’re fine’.”

Harris hopes her actions will emphasize to others that those with disabilities should be treated just like everyone else. She added she and her friends weren’t attempting to shed a negative light on the nail salon. “We’re not trying to bash the nail salon. We’re not trying to make them lose customers, make them look bad,” she said. “But maybe spread awareness that no matter the person, who they are, what color they are, disability, whatever, they’re people too. She’s a girly girl. She’s just like you, me, Tasia, my daughter, anybody. She wants to look pretty, you know, and so why can’t she?”

Indeed. Why not? Well done, ladies for making this young woman’s day.