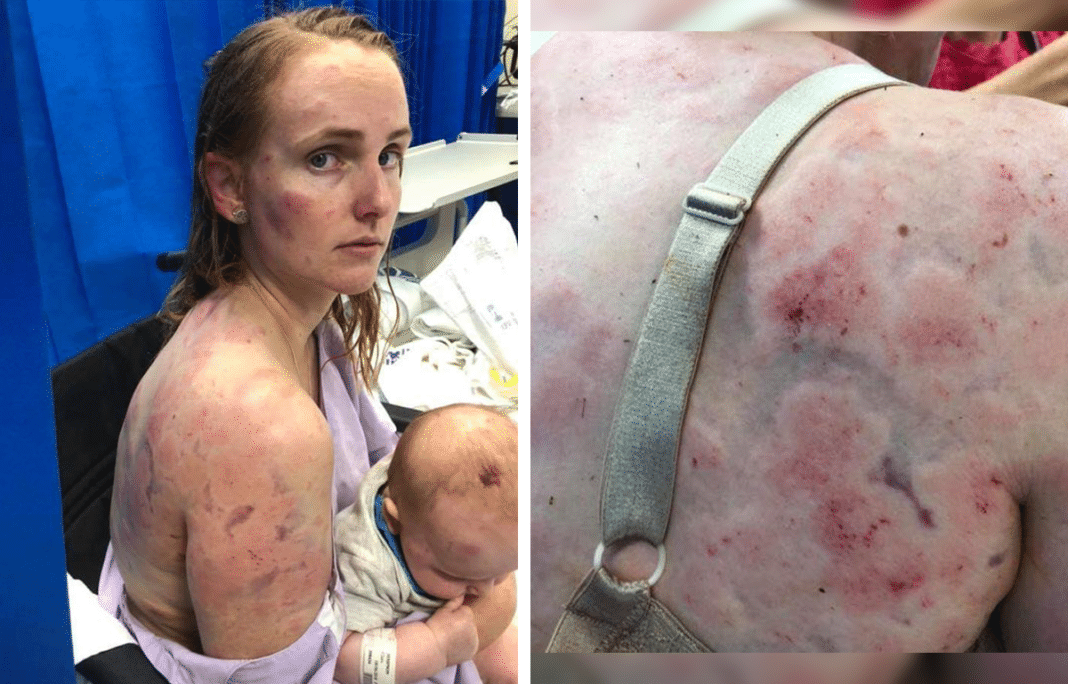 America is beginning to recover from the most intense hurricane on record to hit the Florida Panhandle, Hurricane Michael. Across the globe in Australia, they are facing their own weather disasters. One mother near Queensland, Australia used her body as a shield when a supercell tornado generated an enormous hail storm. The storm pelted the car she was driving with her grandmother and daughter with tennis-ball-sized chunks of ice on Thursday.

Fiona Simpson described the harrowing scene: A massive bang hit the car as the hail hit the windows. It was so loud that she couldn’t hear her baby crying, but could see her. The storm shattered the rear window, and her baby was exposed to the full effects of the storm.

Simpson managed to climb over the seat to reach her, shielding her inside the car seat with her body. The projectiles throttled her body as she tried to wait it out, but then it got worse. The window on the front passenger side, where her grandmother was seated, blew out, although it was still too loud to hear it. She could tell because of how it felt as more rain and hail suddenly pelted them.

Simpson knew she had to act fast to get her daughter to safety, so she pushed her across to the front seat to her grandmother, got in the driver’s seat, and put the child in the floor of the car near the pedals. It was the only spot that was relatively shielded, although even the windshield was blown out too.

See her discuss what happened below:

Mother describes how she protected baby from hail stones

Scary weather in some parts of the country. Fiona Simpson put her body on the line to protect her infant daughter when hail smashed the windows of her car. This is what happened.

Fiona bravely saved her baby, and now she’s been nominated for a bravery award by the Premier of Queensland, Annastacia Palaszczuk. The photos of her badly bruised skin show that it is remarkable she was able to think so quickly to protect her child and to survive herself. All three required hospital treatment following the incident.

#BREAKING: Kingaroy mum Fiona Simpson will be recommended for a bravery award by Annastacia Palaszczuk MP. ????In case…

The storm caused extensive damage to property and livestock, killing hundreds of chickens, injuring horses, and destroying entire crops for the season. One animal that caught in the storm became a symbol of hope. “Lazarus,” the cockatoo, was knocked to the ground and stripped of feathers but made a surprising recovery when Dairy farmer Damien Tessman found him.

“It was amazing how quickly it moved. It would be honestly like a cyclone, there’s not a leaf left on a tree … the poor old cockatoo has been blown out of his tree,” said Tessman.

?? MEET "LAZARUS" THE MIRACLE COCKATOODairy farmer Damien Tessman was sure Laz was a goner after a vicious storm…

See the hail storm in the video below:

STRAWBERRIES/BLUEBERRIES SMASHED ??A busload of 36 seniors sheltered in Cooloola Berries' cafe as hail hammered its crops at Wolvi, near Gympie.It's forced an early end to their strawberry season and around 900 kilograms of blueberries have been lost.The good news is the cafe will carry on and they have lots of pre-frozen berries to make their cider and icecream in the months to come.Pictures: Kim Lewis Cooloola Berries

More from 7 News Brisbane below:

A brave Queensland mother was left battered and bruised by hail after she used her body to protect her baby at Kingaroy yesterday. “I pulled over because it was just way too dangerous. Then the hail started and it just got heavier and heavier… It blew out the back window where my daughter was sitting in the car seat, so I got out of my seat and covered the car seat.” – Fiona SimpsonReport on 7 News at 6pm. www.7plus.com.au/news #7News