Mom Finds Young Son Kneeling At Walmart, Looks At Sign Above Him And Immediately Knows Why 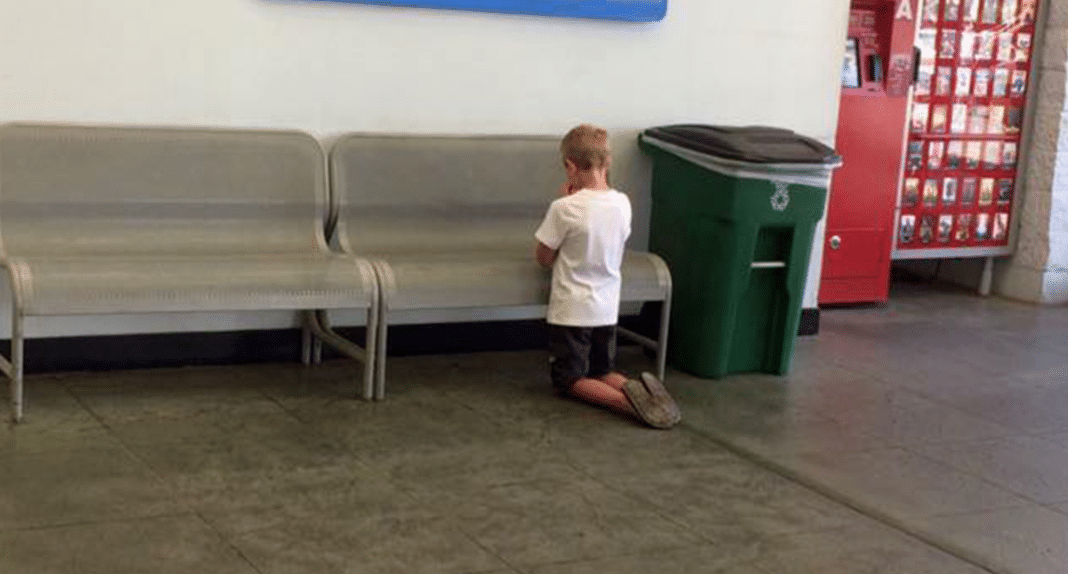 It’s a terrifying moment that any parent knows all too well. On your family outing to the big box store, your kids are excited and running wild. Despite making your best efforts to keep track of what they are doing, your child is suddenly missing from view and isn’t responding as you call their name.

Panic sets in as your immediate search effort fail to locate your little one.

Your heart is pounding as you head for the front of the store.

That’s what happened to one mother as she was shopping at Walmart. Fortunately, this story ended in a most unexpected and extraordinarily beautiful way.

There at the front entrance, she found her little boy. He wasn’t in danger or missing anymore. Instead, he was kneeling on the floor before a sign of missing children posted on the wall.

He was quietly praying for the safe return of those missing children, unaware that his mother had feared the same fate for him just seconds earlier.

The picture of this beautiful moment went viral and continues to reach new people on Facebook, even though it was posted over a year ago by a Texas radio station.

“I had to run into Walmart. I turned around to make sure my son was next to me. Instead of finding him by my side I found him kneeling in front of the missing children board praying,” reads the caption.

I had to run into Walmart. I turned around to make sure my son was next to me. Instead of finding him by my side I…

The story of this moment becomes even more poignant because the family member of one of the missing children posted on the sign above the praying boy saw it and shared it on Facebook as well, hoping that this boy’s prayers would help bring her cousin, Aubrey Carroll home.

“I don’t know who this little guy is but I want to Thank you for praying for these children. One of those kids up there is my cousin Aubrey Carroll. This has surely touched my heart,” reads the post.

Family members are still waiting for news of Aubrey Jayce Carroll’s whereabouts. The boy would be 17 years old now and disappeared from Spalding High School in Georgia on May 24, 2016.

Perhaps sharing the story of this praying boy could lead to finding Aubrey or other missing children after all.