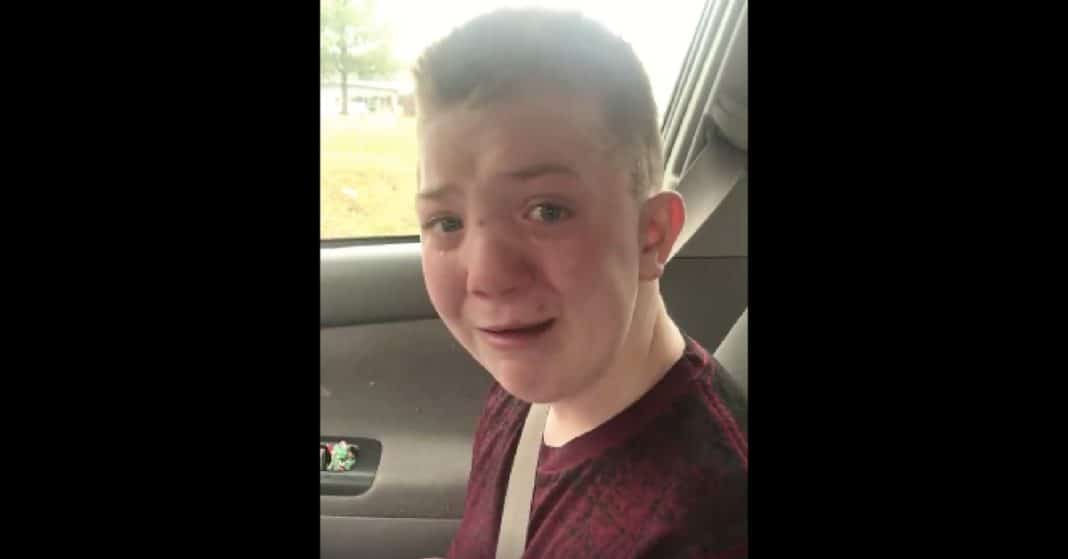 I’ve never forgotten my personal experiences with bullies while in school. I never understood why they teased me. Their comments were hurtful and cruel. It eventually stopped but, even now as an adult, I still remember their painful taunts.

Adolescents are very impressionable. They want to be accepted and loved.

The teenage years are difficult because these kids already struggle with self-image issues. Adding bullying to the mix just causes more stress and problems, and bullying can affect a child’s confidence and self-assurance long into adulthood.

Thankfully, some schools have started campaigns to end this horrible practice, but unfortunately, the horrible trend continues largely unchecked.

The mother of a young boy from Knoxville, Tennessee, recently put a video on Facebook in which he discusses how bullying has affected his life.

Keaton Jones is a middle school student who’s been harassed by his fellow students. The bullying has gotten so bad he’s afraid to go to lunch because students have poured milk on him and shoved ham down his clothes.

“They make fun of my nose. They call me ugly. They say I have no friends,” Keaton said as tears rolled down his face.

“Just out of curiosity, why do they bully? What’s the point of it?” he asked. “Why do you find joy in taking innocent people and finding a way to be mean to them? It’s not okay.”

“For the record,” Kimberly said, “Keaton asked to do this AFTER he had me pick him up AGAIN because he was afraid to go to lunch. My kids are by no stretch perfect & at home, he’s as all boy as they come, but by all accounts, he’s good at school.

“Talk to your kids,” she encouraged. “I’ve even had friends of mine tell me their kids were only nice to him to get him to mess with people. We all know how it feels to want to belong, but only a select few know how it feels not to belong anywhere.”

Keaton, who has some facial abnormalities, says the kids told him they were teasing him because he is “ugly.” The young boy cried as he revealed he has no friends.

As heartbreaking as it is to watch this video, Keaton’s story has become an uplifting one. In just a few days, the video has been viewed millions of times and Keaton has gained supporters and new friends from all over the world.

Many people, including several celebrities, have sent him words of encouragement. Keaton and his family have even received invites to movie premiers and different athletic events!

Tennessee Titan’s tight end Delanie Walker invited Keaton and his family to a Titan’s game as his guests. In a video Walker recorded for Keaton, he read a poem by Gautama Buddha before advising the young boy that “you can be whatever you want to be.”

@DonteStallworth @Lakyn_Jones hopefully my video and the tweets that Keaton have been getting brings awareness to bullying and how serious it is in our school system pic.twitter.com/1Dujv3RxA5

Tennessee Volunteers quarterback Jarrett Guarantano met up with Keaton to spend the day with him and show him some love.

“This dude is very special and has changed my life forever,” Jarrett wrote. “Now I have the little brother I always wanted! God bless you my man”

So I got the chance to spend the day with my new best bud Keaton. It was unbelievable to get to know him and realize that we have a lot in common. This dude is very special and has changed my life forever. Now I have the little brother I always wanted! God bless you my man pic.twitter.com/vMHVtnf2rC

Hopefully, the spotlight Keaton’s video has shone on bullying and its short and long-term effects will show young people how destructive their hurtful words and actions are.

We applaud Keaton for his courage to be vulnerable and speak out against bullying in such a public and powerful way. Let’s pray this will be the start of a movement to end bullying once and for all!

Are you proud of Keaton for speaking out against his bullies? So share this!