Video: Mom Tries Getting Baby To Say ‘Mama’ – But Dog Beats Infant To It 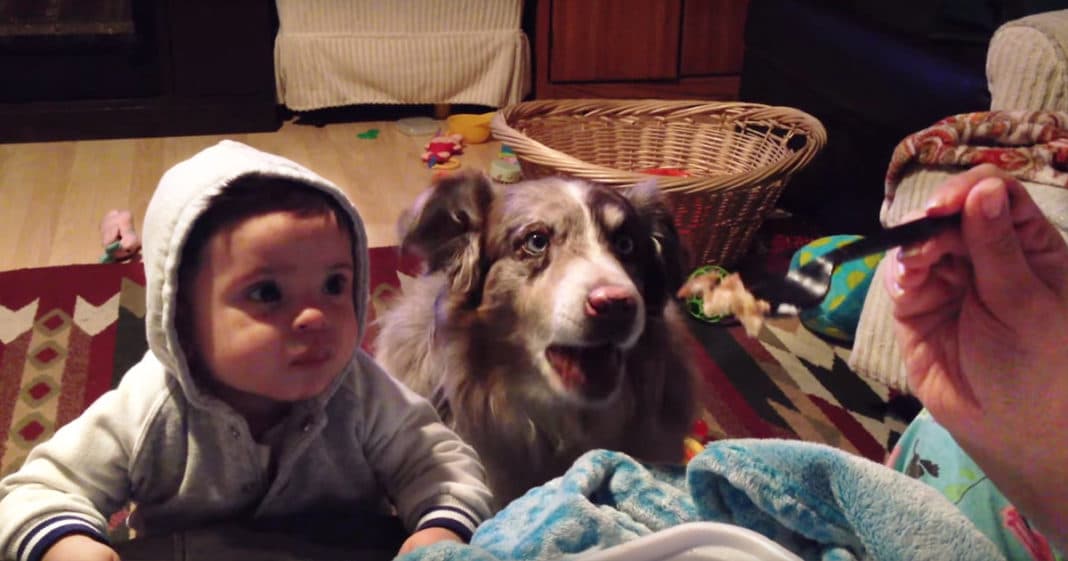 There seems to be a common misunderstanding between mothers, dogs, and babies. I wrote a story a couple of months ago about a baby who honestly thought that his “mama” was the dog. His dad was behind the camera cracking up when he heard his son saying, “Mama! Mama!” but noticed that he was actually speaking to the dog. It was hilarious, and absolutely adorable.

In the video below posted by Top Buzz, a dog and a baby have kind of switched places this time around. The baby’s mother sat on the couch with both the baby and the family pet at the edge of the cushion. She was trying to get her baby to eat some food.

Despite her encouraging efforts, the baby just would not say the magic word. He continued staring at his mother then at the food, and so on.

From where they were sitting, the food must have looked really tasty because the dog could not resist the temptation to get some of it for himself. When a couple of barks weren’t enough to get him what he wanted, he resorted to another tactic: speaking the word himself.

You can see the dog panting, trying to get the right words out to win the mother over. After several attempts, he was actually successful, and it is the funniest thing ever!

Through his breath and minor barks, you can actually hear that he is saying “Mama! Mama!” How he was able to do this, I don’t know, but it is such a joy to watch.

The family burst into laughter as the dog confidently continued calling the mother. Even the baby caught on to what he was saying, and he was not happy about it. He started to softly hit the dog to get him to be quiet.

Sibling rivalry at its finest! What a funny video to start your day. You can watch it all below!