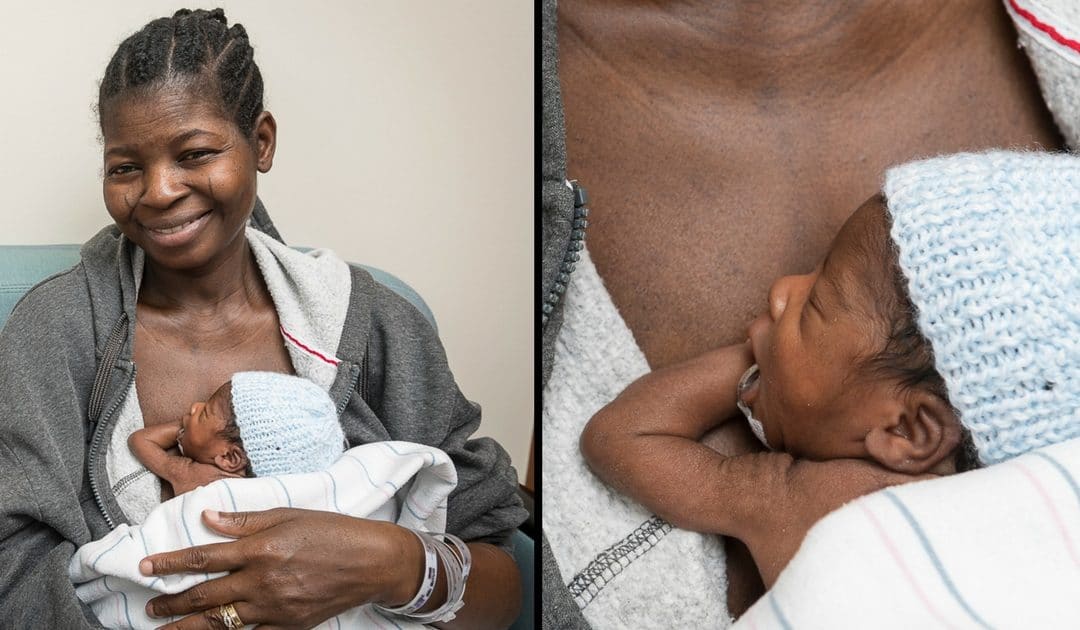 On May 11 at 8:26 a.m. a 40-person team at VCU Medical Center successfully delivered sextuplets. Ajibola Taiwo, a native of Western Nigeria, was 30 weeks and two days pregnant when she gave birth to three boys and three girls by cesarean section. 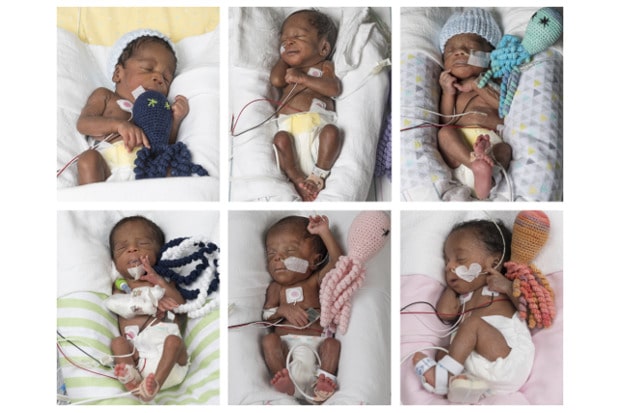 The Taiwo sextuplets were born on May 11, 2017 at VCU Medical Center. The three boys and three girls are in good condition in the Neonatal Intensive Care Unit at Children’s Hospital of Richmond at VCU.
Photos by Allen Jones, University Marketing

The babies ranged in weight from 1 pound, 10 ounces to 2 pounds, 15 ounces. All six are doing well and continue to thrive in the Children’s Hospital of Richmond at VCU neonatal intensive care unit. 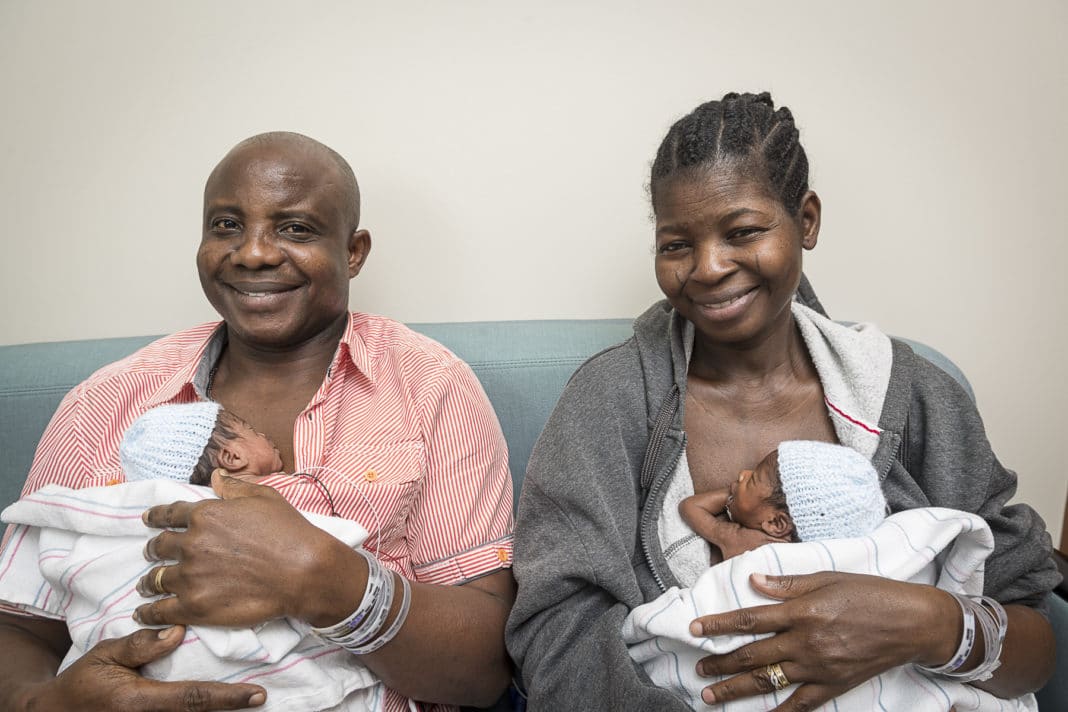 (L to R) Adeboye and Ajibola Taiwo held two of their sextuplets on May 23, 2017. The couple practiced kangaroo care, also known as skin-to-skin. During kangaroo care, the baby is held against the bare chest of a parent. The act of placing the infant skin-to-skin with mom or dad has been shown to maintain skin temperature regulation of the newborn, increase initiation of successful breastfeeding, and ease the transition to life outside the womb.

The Taiwos tried to conceive for 17 years and were overcome with joy when they saw four heartbeats at their first ultrasound in November. It was not until January when they arrived at VCU Medical Center that they learned they were expecting sextuplets.

“I was excited,” said Adeboye Taiwo, the father. “For the very first time we were expecting.”

According to the Centers for Disease Control and Prevention, in 2015 there were nearly 4 million live births in the United States, only 24 of which were quintuplets or other higher order births.

“The team quickly assembled to begin prenatal management and delivery planning including pre-delivery drills and resuscitation exercises,” said Susan Lanni, M.D., medical director of labor and delivery and maternal-fetal specialist at VCU Medical Center. “A typical labor and delivery shift includes one, perhaps two premature births, usually with time in between. We had to coordinate with our colleagues in the NICU for six premature babies to be delivered simultaneously.” 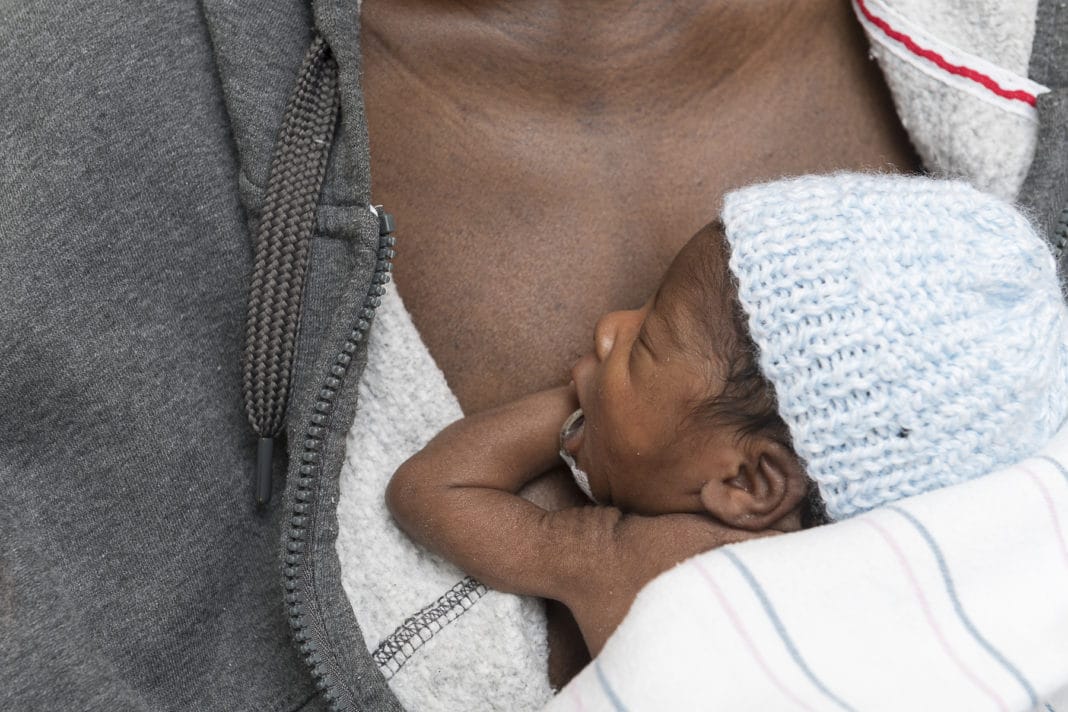 The comfort of kangaroo care and skin-to-skin-contact, provided as soon as safely possible for a newborn and as often as possible for an infant in the NICU, supports attachment and bonding for both the infant and parent and provides a calm, soothing environment closer to what the baby experienced before birth.

Developing a relationship with the mother and father was a critical component to the successful high-risk delivery.

“We’re going through this extraordinary journey together with the family,” said Ronald Ramus, M.D., director of the Division of Maternal-Fetal Medicine at VCU Medical Center. “It’s not every day that parents bring home sextuplets. Mrs. Taiwo was eating, sleeping and breathing for seven. A lot of the support and encouragement we gave her to make it as far as she did was important, and one of the biggest contributions we made as a team.”

Read about Ajibola’s hopes for her babies as they get older on VCU News.