Mom Thinks She’s There To See Son In Uniform, But What Team Does Next Leaves Her In Tears 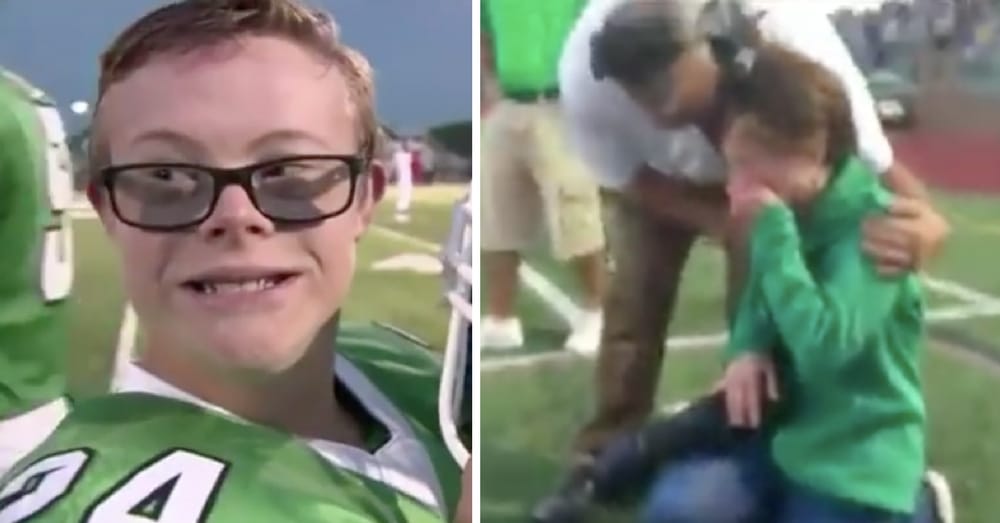 High school senior Robby Heil has been a part of the Novi High Wildcats football team for a while. He works as the team’s hydration manager and all of the players consider him a part of their “family.” There’s just one thing that makes Robby different from them – he has Down syndrome.

At a recent football game, the Michigan high school’s team decided to do something special for Robby and his mom, Debbie, who just learned she has advanced bone cancer. It was a moment that no one who was at the game will ever forget!

The team told Debbie that Robby was going to be suited up that night and she could come onto the field and take pictures. She was so excited and proud to see her son in uniform and interacting with the other players as a member of the team.

What Debbie didn’t know is that the Wildcats had coordinated with the opposing team to create an incredibly special moment for the mother and son.

As Debbie watched from the sidelines, Robby took the field, grabbed a handoff from the quarterback, and ran to the end zone for a touchdown.

Debbie was so overwhelmed that she collapsed to the ground in tears.

“I dropped to the ground because I was so emotional when I saw him make that touchdown,” she said. “I’ve always been proud of him being the water boy, or as people call him the hydration manager, but this was incredible. He’s Rudy tonight. He’s Rudy.”

After the game both teams crowded around Robbie, cheering him on. The opposing team even had a special jersey made for him to mark the special occasion!

Debbie will be forever grateful for the love and support she and Robby have received.

“This team has been instrumental in helping me get him to practice while I’m at chemo,” she said. “It takes a village to raise my son and this village has really been outstanding.”

As for the rest of the team, they say it was a no-brainer to create this special moment because the teen deserves it.

“No matter how bad a day he’s having, it’s a smile from ear to ear,” said head coach Jeff Burnside, “and the opportunity to put that helmet on tonight, it brought tears to my eyes tonight and tears all over the place.”

Were you touched by what these football teams did for Robby and his mom? So share this!