Mom Thinks Mirror Is Christmas Gift, Then She Looks Into It And Sees The Real Present Behind Her 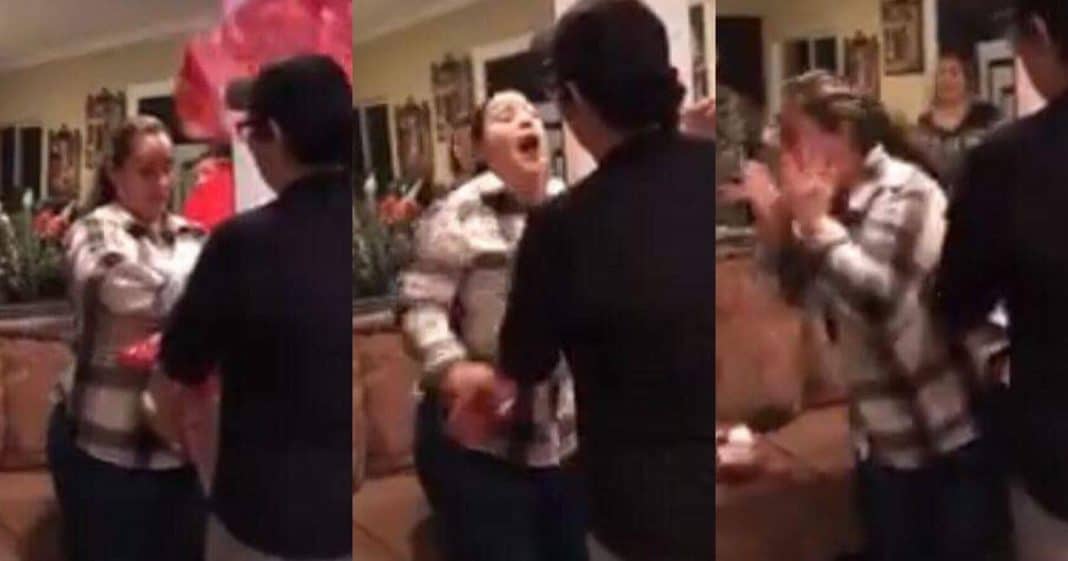 Though the celebration of Christmas goes way deeper than just gifts, they are an often included element of the holiday. Families all over the world gather around the tree to unwrap and unbox what they have received. Some items you might grow out of or lose interest in, but then there are those Christmas presents that you find yourself still talking about and gushing over long after the holiday season has passed.

For some, it might be an engagement, a new car, or a cute puppy. For others, it might be something a lot less tangible, but equally, if not more, emotionally rewarding.

One mom got a Christmas gift that she will never forget, and it definitely shows that the best gifts truly are free!

Not everyone has the privilege of spending the holidays with their loved ones. Friends and relatives who have passed away, moved cities or states, or have been deployed can really put a pin in the excitement of the season. Even though these circumstances aren’t ideal, they are an unfortunate reality.

The mother of Cheyanna Jeanes thought Christmas day was going to be celebrated without her daughter, but Cheyanna wanted to make sure that this would not be the case.

In the video below, posted by Cheyanna via Twitter, her mother is unwrapping a long Christmas present held up by two family members. According to her daughter’s tweet, the gift she is opening is a mirror.

What for, you ask? Well, to reveal an even better surprise!

As her mother begins tearing apart the wrapping paper, we see Cheyanna sneak in from behind. She is instructed to rip from the top and pull straight down. After doing so, she is a little confused, but amused, by the fact that the gift is just a mirror. When the relative holding it up directs her attention to the reflection in the corner, her reaction is honestly priceless.

Standing in her Navy attire, staring at her through the mirror, is her baby girl!

She began to scream and cry in total disbelief as Cheyanna walked over to her for a warm embrace. They cried in each other’s arms as their family stood by and delighted in their reunion.

Cheyanna was officially sworn in August of 2017, as stated on her Twitter page.

This may or may not have been her first home visit since her departure. Regardless, it was clearly unexpected and worth more than anything else her mother could have received. You were her present, indeed!

What a beautiful idea, Cheyanna! Thank you for sharing this awesome video with us. We are so happy you were able to make it home for the holidays after all.

Suprised my mom for Christmas, she looked in the mirror and saw her present ❤️❤️ pic.twitter.com/goY4Cf4vjp