Mom And Son On Walk When They Spot Tiny Package. Find Note On Front That Leaves Them In Tears 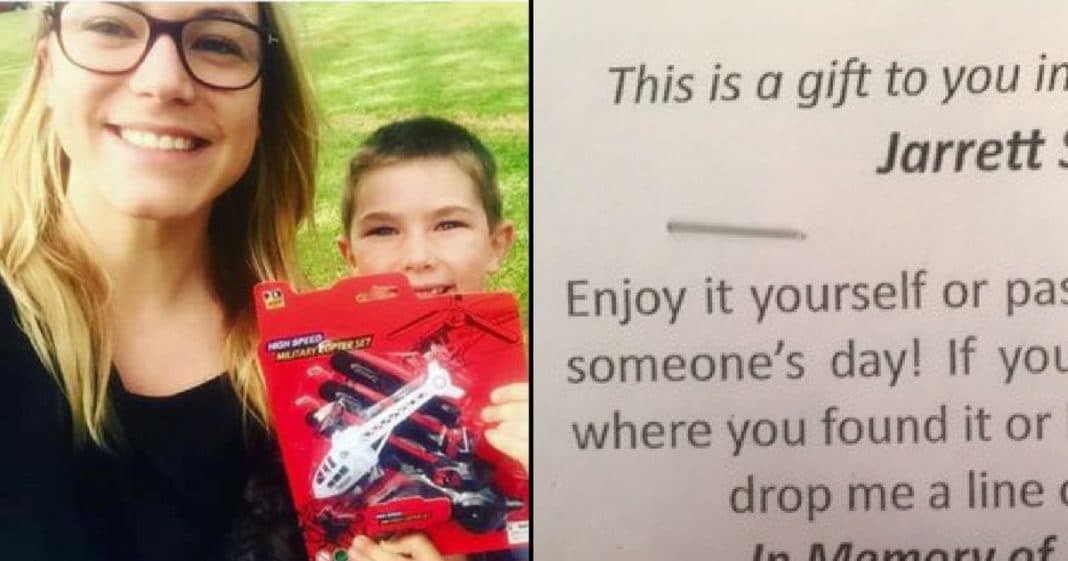 India Ron and her son were taking a walk one afternoon when they noticed a toy car still in its package sitting near a Redbox kiosk. Curious, they picked it up, and that’s when they noticed the note attached to the front of the box.

“This is a gift to you in memory of my son Jarrett Sexton,” the note read. “Enjoy it yourself or pass it along to brighten someone’s day! If you would like to share where you found it or how you passed it on, drop me a line on Facebook at In Memory of Jarrett Sexton.”

India went to Facebook and looked up the page, and when she saw Jarrett’s story she instantly broke down in tears.

When Jarrett was born prematurely in February 2013, he weighed only 2.4 pounds. Doctors worked tirelessly to save him, but sadly he passed away after just nine days. His parents were heartbroken.

“I thought about him every day,” Jarrett’s father, Stephan Sexton, said. “It was just always very heavy on me.”

With Jarrett’s passing went so many dreams of the future they’d had for their son.

Stephan has always loved cars and had looked forward to sharing his passion with his son. As a way of coping with his grief, he would bring a Hot Wheels car with him whenever he visited Jarrett’s grave and leave it next to the headstone as a memorial.

As the years passed, Stephan realized he could take his grief and use it to bring joy to others. That’s when he came up with the idea of leaving Hot Wheels cars in different places along with the note.

The first time someone found one of the cars Stephan knew he was onto something.

“She came over and she almost had tears in her eyes and she said, ‘You know, I bring my kid to the car wash because he’s autistic and he loves cars,'” Stephan recalled.

Since that day he has continued to leave cars to be found, often in parks and on hiking trails, but sometimes in more suburban places, like next to a Redbox kiosk.

After finding the car, India wrote to Stephan telling him how much that one small gesture had meant.

“Thank you for brightening my sons day today,” she wrote. “I’ve been going through a struggle lately and it’s been rough. As we were walking along McDonald’s (Northeast) ive noticed a Matchbox toy near the red box rental and read your note attached and brought tears to my eyes. I’m sorry for your loss and THANK YOU.”

Stephan said that hearing back from the people who have found his cars and knowing he has helped brighten their days has helped him begin to heal.

“Every time I get a message it feels like my heart maybe heals a tiny bit,” he said.

While nothing can bring back little Jarrett, Stephan has learned how to turn his grief into joy, and his small acts of kindness have touched more lives than he can count.

Stephan said he has already left almost 300 cars in various places around the country. He hopes to one day have cars found in all 50 states.

Right now there are about 40 cars still out there that he hasn’t heard back about, so keep your eye out, and if you do find one, be sure to drop him a line.

Were you touched by the way this father is using his grief to bring joy to others? So share this!