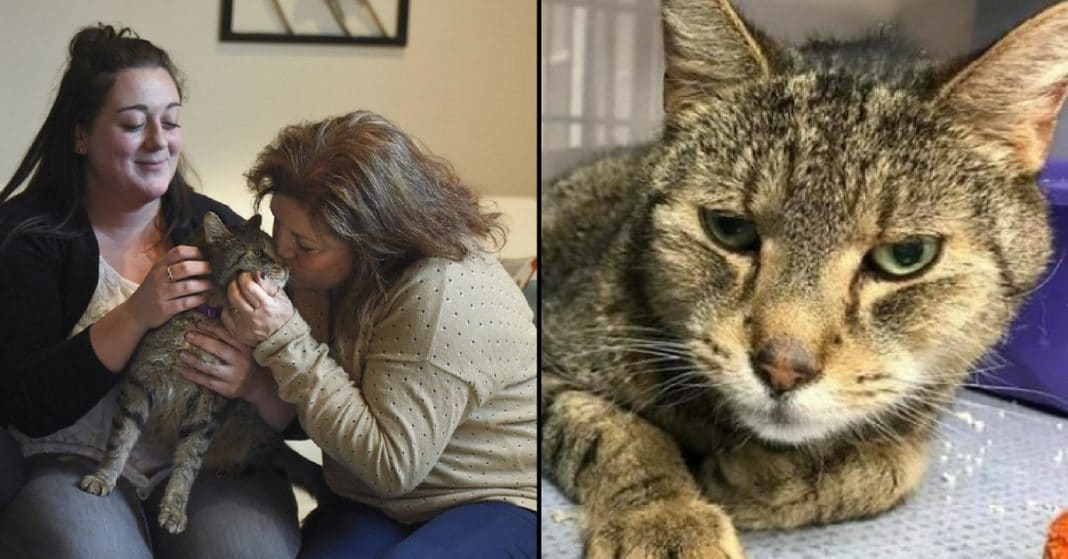 A sad fact of life is pets sometimes go missing. The American Humane Association believes ten million cats and dogs go missing or are stolen each year. One out of three pets will become lost at some point in their lives.

Bob let him out one evening, but when Susan called him indoors later that night he didn’t return, which was very unusual.

“He would go to the front door like a dog when he had to go to the bathroom, but he would always come back and meow at the door to come in,” Susan said.

Bob, Susan, and their children went out the next day searching for Jimmy. They asked neighbors if they’d seen him, hung missing cat posters, and even contacted the police and local animal shelters, but to no avail.

“We were devastated,” Susan said.

For months, the family looked for Jimmy.

“Not only me, but my kids and husband, too,” Susan said. “If I saw a cat that looked the same, I would wonder.”

The family began to lose hope that they would ever see Jimmy again. Then, something miraculous happened.

Susan was on Facebook when she saw a familiar face looking back at her.

“One of my Facebook friends had shared a post from WMASS with a picture, and I looked at it and thought how much he looked like Jimmy,” Susan said.

The more she looked at the picture, the more sure she became that it was of her cat.

Susan contacted the shelter for more information. It turns out the cat had been found three days after a horrible blizzard had hit the Northeast.

Because of Jimmy’s age, demeanor, neutering, and missing front claws, they figured he had to belong to someone. Volunteers at the West Milford Animal Shelter posted photos of Jimmy on their Facebook page, even paying to have the pictures show up in the newsfeeds of people with cat-specific interests within a ten-mile radius of the shelter.

When Susan saw the post five days later, it had already been viewed over 27,000 times and shared 600 times.

The next day, she and a neighbor went to the shelter. Susan brought along a pillowcase and dog toy Jimmy loved hoping it would trigger his memory, but it turns out she didn’t need those items.

“When they opened the crate door, I said, ‘Jimmy is that you, bud?’ and he walked over and head-butted me and smooshed his nose into the dog’s toy. I immediately started to sob,” Susan said.

“He started to rub up against us and when I was rubbing his belly, he nipped me, which he always did. He put his head in Dayna’s hands, and he started to purr loudly.”

Jimmy’s disappearance still remains a mystery, but the Zelitskys believed his tendency to climb through open windows of cars was the cause. They think he hitched a ride out of their neighborhood while hiding in a vehicle.

Susan thanked the folks at the shelter for posting the pictures of their beloved cat on social media.

“If it wasn’t for the wonderful people at WMASS, we would have never had this happy reunion,” she said.

Thankfully Jimmy is now back home where he belongs. He’s taken over the house again as though he wasn’t absent for two and a half years. He’s also made friends with the two cats the family adopted after his disappearance.

“When it was okay to let him roam the house, he walked around like he owned the place,” Susan laughed.

Thanks to social media, Jimmy was reunited with his family. To make sure something like this never happens again, vets suggest getting a microchip. About the size of a grain of rice, these chips are injected under the skin of pets. They contain contact information for the owners so the animals can be returned home.

Hopefully, other people will heed this advice so nothing like this ever happens again!

Were you amazed to see Jimmy reunited with his family after so long? So share this!