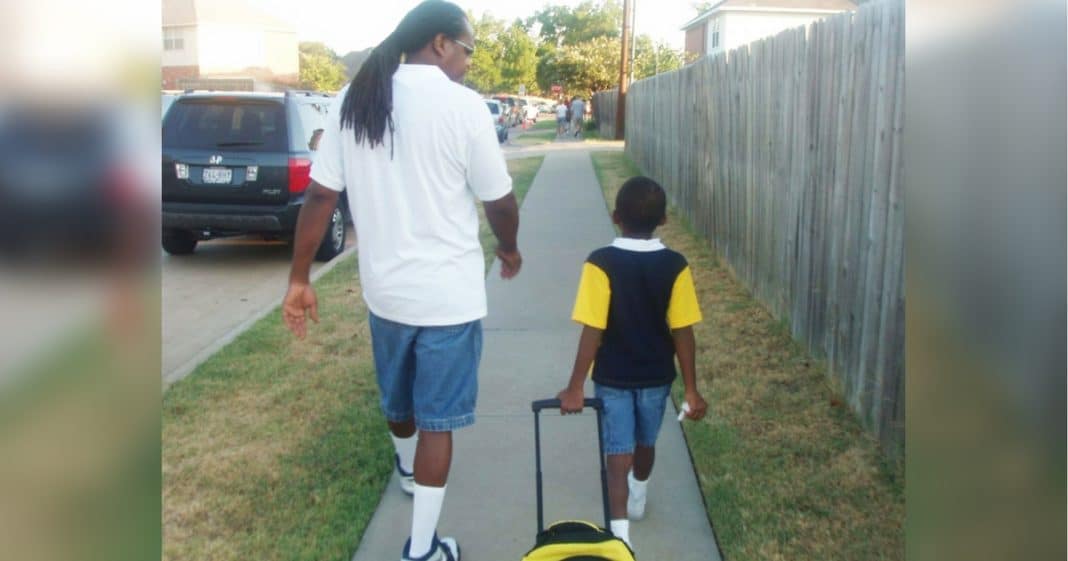 Our parents are there for all of the big moments in our young lives – first words, first steps, first day of school. As we grow older we grow more independent and start having more of those big moments on our own, but one young man and his father are melting hearts all over the world with their bond that has stood the test of time.

Charles Brockman III, 17, and his dad, Charles Jr., have always been close. From day one, Charles Jr. has either walked or driven his son to school almost every single day.

As the younger Charles prepared to begin his first year of college, he posted two sweet photos side by side that have captured the hearts of thousands of people and made him an overnight viral sensation.

The first picture shows the father and son walking together to Charles III’s first day of kindergarten. The second photo looks almost identical, except in this one the little boy is all grown and up they are walking into his new dorm room at Mississippi State.

From the first day of kindergarten to college move in. Thank you dad. pic.twitter.com/IpbudBIgdp

“I just wanted to post that picture to thank my dad for always being there during everything we went through,” Charles said. “He and my mom are really special to me.”

In just a matter of days, the sweet tweet received hundreds of thousands of likes and retweets. People couldn’t get over the strong bond between this father and son…and how the elder Charles doesn’t appear to have aged at all over the years! He’s even sporting the same stylish dreads.

“He started growing dreads when I was born, and maybe a few years ago he was talking about cutting them,” his son said. “Then he said he would wait until I graduated high school, but I’m sure he’s going to keep them as long as he can—at least I hope he does, they’re pretty cool!”

While many teens might be embarrassed to have their parents walk them to school or pose for first day of school pictures, Charles said he looks forward to sharing those special moments with his parents.

I’m so thankful to my parents for always being here & taking me to every meet. I couldn’t do it w/o them. But now it’s time for college?? pic.twitter.com/V39ArUJYIl

“They would always drop me off in front and have me take a picture, even if people were looking,” he said, laughing. “Even if it was a little embarrassing, I still did it because it was a good tradition.”

Charles will be running track for his school and is planning on studying broadcast journalism and communications. While we’re sure he’ll be very busy, we know that one thing will remain constant – the love and respect he has for his parents.

“Don’t take anything for granted with them,” he advised. “Appreciate your parents, while they’re here.”

Were you touched by the sweet bond between this father and son? So share this!