Mom Puts Camera In Twins’ Bedroom, But When She Sees Tape Later She Can’t Stop Laughing 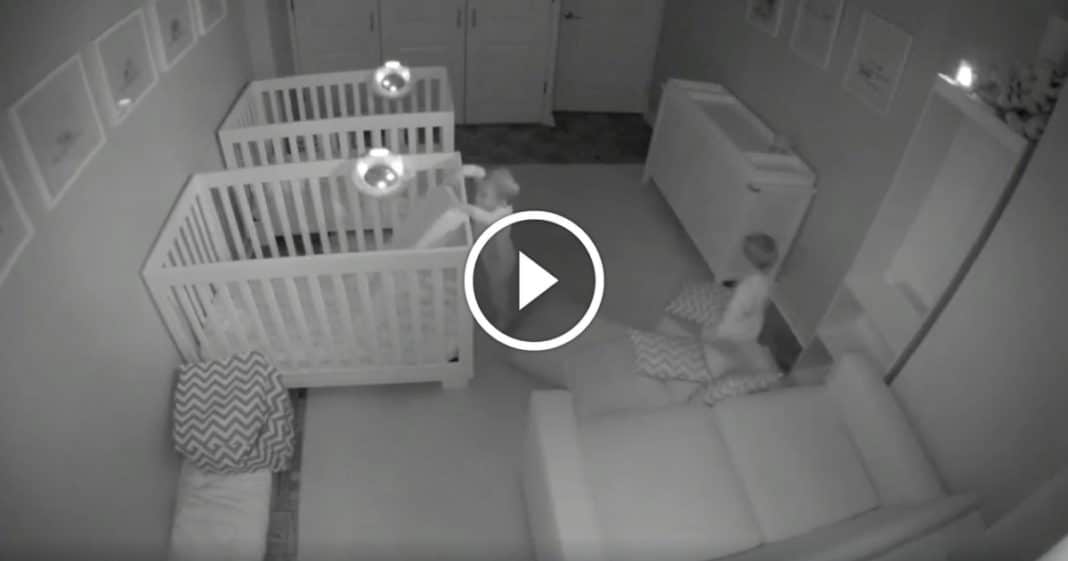 As any mom of a toddler can attest, those little tykes are much smarter than we give them credit for. And when you have twins, that means double the trouble!

Jonathan and Susana Balkin know this firsthand. The New Yorkers are parents to twin 2-year-olds Andrew and Ryan, and boy do they have their hands full!

They installed a home monitoring system in their boys’ room for safety, but when they watched the footage later they couldn’t believe their eyes!

While their parents thought they were cuddled up all snug and warm in their cribs, the boys were really living it up, climbing out of their beds, arranging toys and pillows on the floor, crawling on top of the furniture, and having what appears to be some late-night chats.

As this became a nightly thing, Jonathan and Susana tried everything they could think of to keep the twins in their own respective beds at night.

Jonathan said they “slowly removed everything and bolted the furniture to the walls.” When that didn’t work they tried putting the boys into beds instead of cribs, but Jonathan said that experiment lasted only one night, as the boys were “nonstop all night.”

While the Balkins are still trying to figure out the best way to keep their sons in bed each night, they decided to share a particularly hilarious video of the boys’ antics, and people have been going crazy for it!

Watching this, it’s hard to believe that these little escape artists are just 2 years old!

One thing is for sure, though – Andrew and Ryan have two parents who love them very much. As Jonathan wrote when he posted the video, when he watched it he couldn’t help but start “thinking about how blessed I am.”

Did you love watching the twins’ hilarious antics as much as we did? So share this!