Mom Panics As Flood Rises Around Newborn. Gets Message From Stranger, Knows It’s A Miracle 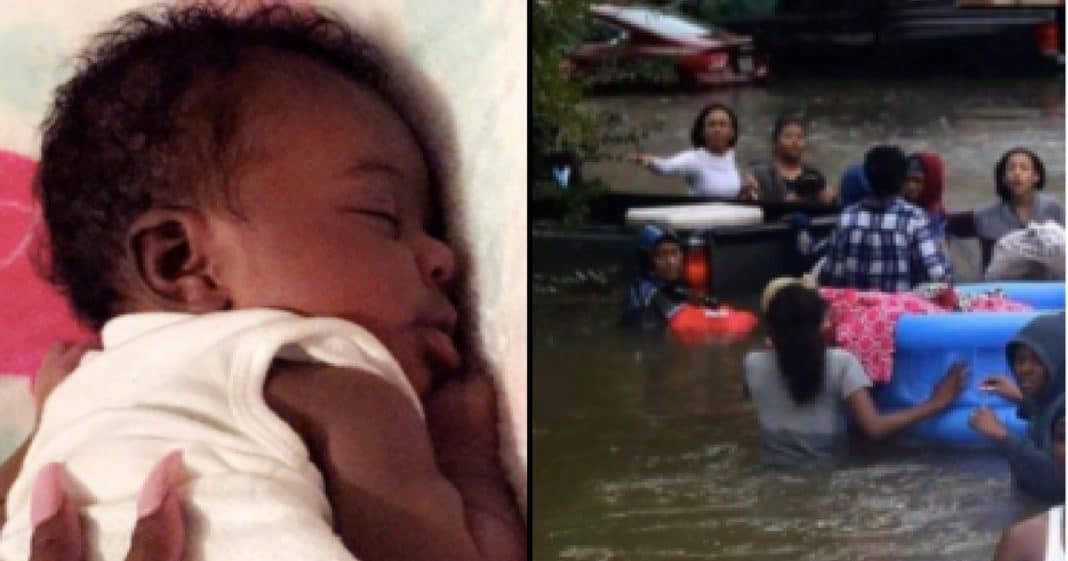 Hurricane Harvey was gaining in power as Erykah and her family suddenly realized they were trapped inside their house.

Many people were not able to get through to 911 due to the number of emergency situations happening during the storm. Erykah had tried unsuccessfully to call for help as the flood waters rose around her house. Twelve people – eight adults, three children, and one infant – were stranded in her house, unable to get out without a boat.

As the water rose, knowing no assistance was coming, Erykah grew desperate. She decided to post a picture of her cousin’s 3-week-old daughter who was trapped with them, hoping that seeing a helpless newborn would grab someone’s attention.

Sure enough, she immediately began to receive offers of help from hundreds of strangers. Some called 911 for her while others contacted people directly who could give her aid.

Over 14 hours later, Erykah posted the news that hundreds had been waiting to hear. Thanks to all of the strangers, friends, and family members who contacted emergency services for her, all of the people in the house had been safely evacuated.

Thank you everyone who prayed for us and tried to help as much as they can . My family and I are safe. We walked and we stayed together ❤️?

This is just one of many stories of how complete strangers reached out to help those in need during the storm. In a day and age when rumors and gossip can sweep through social media at lightening speed, this story is a reminder that there are a lot of kind people in the world – people who want to help and encourage others.

If you would like to help the victims of Hurricane Harvey but are at a loss as to how you can do so, there is something you can do! Contact the Red Cross here for further information. They are always accepting donations for disasters such as this.

Were you happy to see these strangers rally together to help Erykah and her family? So share this!