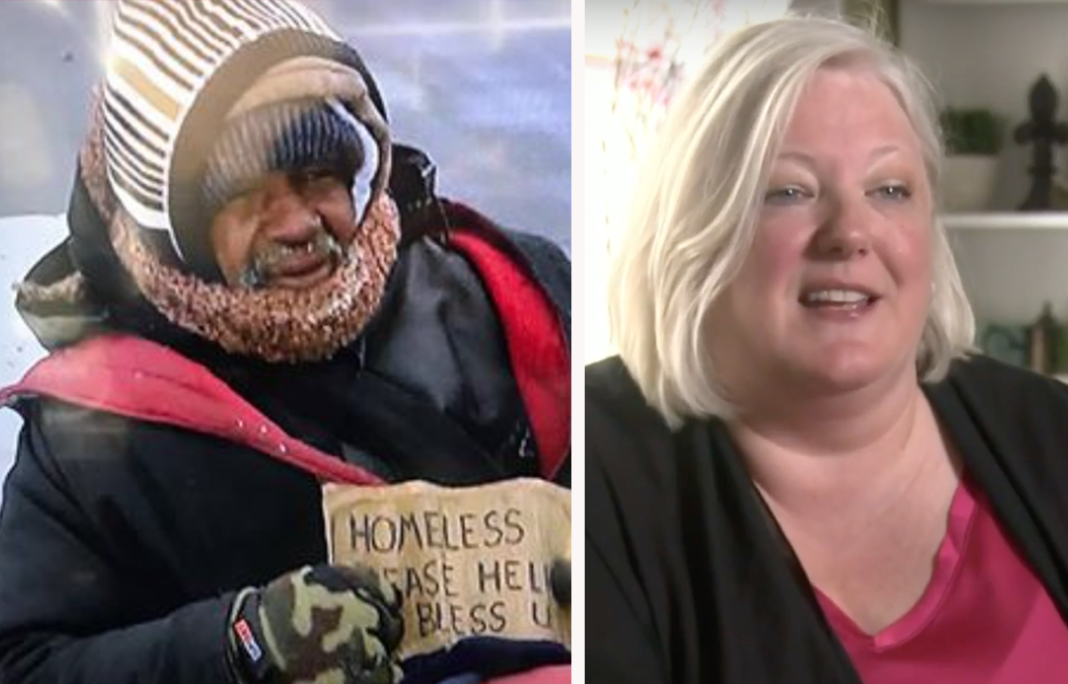 A mother of six, Tiffany Brocker, moved to the city of Detroit six years ago. On her way to work, she would often see a homeless man on the corner. Rather than ignore him, as many did, she developed a friendship over the years, bringing him breakfast and other items like socks.

His name was Gordon or ‘Gordy’ for short.

“Gordy always had a smile and a kind word for me and was always appreciative of any kind gesture, no matter how small,” wrote Brocker.

In their first interaction, she gave him a few dollars and said she would pray for him. King responded by thanking her, flashing a smile and saying:

There was a special connection between them, and an unlikely friendship developed. She soon looked forward to seeing him each day.

“I would always hope that I would be there at a red light so I would have a couple minutes just to say hello, good morning,” recalled Brocker.

“He just had a smile and sparkle in his eye that there just was some sort of a connection that I just really felt I was supposed to meet this guy.”

She would come to find out that the corner where he would sit with a sign was locally known as “Gordy’s corner,” at the intersection of Larned and Chrysler Drive.

In 2014, she saw him appear on the local news, as he asked for help for the homeless population during a particularly harsh winter storm. She was glad to see that he had found shelter and also learned his last name: King.

He would smile when she would say, “Hi, Mr. King” whenever she saw him after that.

One day, she learned that her father was dying, and she rushed to get gas for the drive to Ohio. Inside the station, there was Mr. King.

“I was sobbing and when he saw me he came right over with the utmost concern and asked what was wrong. When I told him my dad was dying he gave me a quick hug and told me he would pray for him. I’m confident that his prayers joined a choir of others that ushered my dad from this life to the next,” she wrote.

In January, her familiar friend disappeared from Gordy’s corner. She found out he had been in the hospital. She hoped that after being hospitalized, perhaps a social worker may have found a housing solution for him.

Then in April, Brocker was compelled to return to the corner. She asked another man occupying his usual spot where he was and found out that Gordy had passed away on December 29 at the age of 64.

“It was really hard to hear that news, that I never got to say goodbye to him,” said Brocker.

“I hope that he would know that we considered him a part of our family and not just a stranger.”

Brocker set out to find out where Gordy was and if he had a proper funeral. With the advice of a close friend in the funeral business, she was surprised to find out that his body remained at the coroner’s office. They were unable to find his next of kin. If they didn’t soon, he would be cremated and would not receive a funeral.

She contacted the Pope Francis Center, where Gordy had often received shelter. Together, they worked at securing a funeral home to arrange his final services. Verheyden Funeral Home donated a casket and provided a hearse to carry his body to his final resting place at Our Lady of Hope Cemetery.

Through their efforts, the funeral was conducted on August 9th at Saints Peter and Paul Jesuit Church. People who had known Gordy over the years were able to come and pay their respects.

On August 9th we will be gathering to celebrate the life of one of long time guests, Gordy King. Many who cross 375 and…

The ceremony touched Cason Pointer, a homeless man who had been Gordy’s friend:

“Man, man. It’s unspeakable … It’s heart-touching. They didn’t have to do this. It came from the heart. Somebody loved him. She loved him.”

Brocker spoke at the service:

“I don’t know Gordy’s favorite color or favorite childhood memory,” Brocker said during the service. “What I do know is that he was a child of God, and that we were meant to meet.”

She started a GoFundMe page to raise money for a headstone and flowers. She achieved her goal in short order. Her 13-year-old son made the first donation of $25, contributing the money he had received from his grandmother for his birthday.

“Someone who is on the street should have a nice funeral and somebody who has been really nice to our family, we should pay them back,” the young teen said.

Leftover funds will be donated to the Pope Francis Center.

Brocker delivered a powerful eulogy for King, encouraging others to reach out with acts of kindness to those around us.

”There are so many people around us who need to be fed, not just physically but also emotionally and spiritually and it truly does not require much effort on our part to feed them,” Brocker said. “Every act of kindness, from holding a door open, to making eye contact and smiling at a stranger, to visiting an elderly neighbor or family member, to buying the person in line behind you a coffee, to donating to charity, to burying someone with no family, not only makes a tremendous difference for the receiver of your kindness, but the ripple effect will impact many more.”

See more in the video from Click on Detroit, WDIV below: