Mom Mortified When Daughter Calls Elderly Man Name, Doesn’t Know How Much He Needed To Hear It 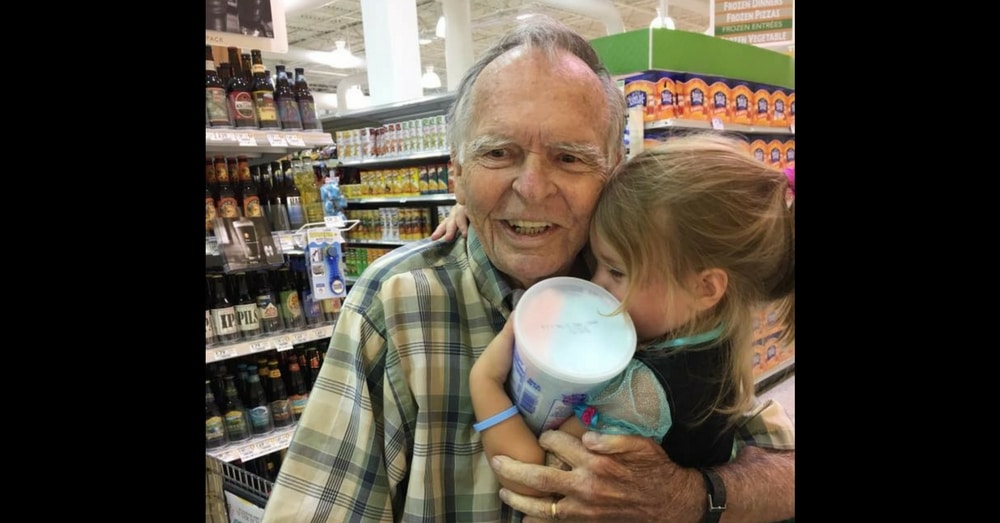 It was a big day for Norah Wood. The little girl was celebrating her fourth birthday and she and her mom, Tara, headed to the grocery store to pick up some cupcakes.

While there, Norah spotted an elderly man doing his grocery shopping, and for some reason she was drawn to him. Her eyes lit up and she began waving to him.

Tara was mortified that her daughter had just called the man “old person” and was about to apologize when she noticed that the man, who looked pretty gruff and unkempt, seemed to soften when he heard Norah’s greeting.

“Well hello little lady,” he replied. “And how old are you today?”

The two had a short and sweet conversation about Norah’s birthday and then they went their separate ways, but Norah suddenly decided she needed to get a picture with the man.

Tara tracked him down a few aisles over and asked if Norah could get a picture with him.

“He said, ‘You want to take a photo with me?’” Tara recalled. “His face lit up. He looked like a completely different person.”

They snapped a few pictures with the man, whose name is Dan Peterson, and then, before they were about to part again, Norah thanked him. His response left Tara in tears.

“His little lip was quivering. He said, ‘Miss Norah, you made me the happiest I’ve been in a long time,’” she said.

That night Tara posted the sweet photos on her Facebook page where a woman who knows Dan reached out to her to thank her for what she and her daughter had done.

“She said when his wife died back in March, he sunk into a depression,” Tara said. “She said, ‘That’s the first time I’ve seen that man smile since his wife died.’”

She managed to get Dan’s phone number and called him, and when he realized who was on the other end “He just burst into tears. He said, ‘I haven’t stopped thinking about that little girl. She just inspired me.’”

They made plans to get together for lunch later that week, and when Tara and Norah showed up at “Mr. Dan’s” house they hardly recognized him.

“He cleaned up. He got a haircut. He shaved. He had on aftershave,” Tara said. “It was like he had Jennifer Lawrence coming to pick him up!”

Mr. Dan had set out crayons and paper for Norah and the two chatted away like old friends while she drew him pictures.

“He had been so lonely,” Tara said. “We covered 30 years of stuff. He was just ping-ponging around. He’s had a fascinating life. He’s had some tragedy in his life. He was just so grateful to have someone listen to him. The whole time, Norah was just curled up in his lap like she’s known him forever.”

Now Mr. Dan and Norah have regular playdates, and Norah even sleeps with a picture of her special friend.

Tara said she has been touched to see the way her daughter saw a need in this man and reached out to him to fill it.

“Something in her recognized something he needed,” she said. “It’s magical.”

Mr. Dan believes this special friendship is a gift from God.

“AT a time when I am trying to question GOD with ‘why me’ he sends Norah and says ‘shut up and listen,'” he wrote in a Facebook post. “Norah speaks without opening her mouth. Why can’t the rest of us do that. H ow many of us can give this kind of love and blessing with the touch of a hand and a smile??”

Says Tara, “Sometimes talking to strangers turns into the most beautiful thing in the world.”

Were you as touched by this sweet friendship as we were? So share this!