Mom Learns Disabled Girl Wrote On Her Cake, Then Shares The Photo On Facebook 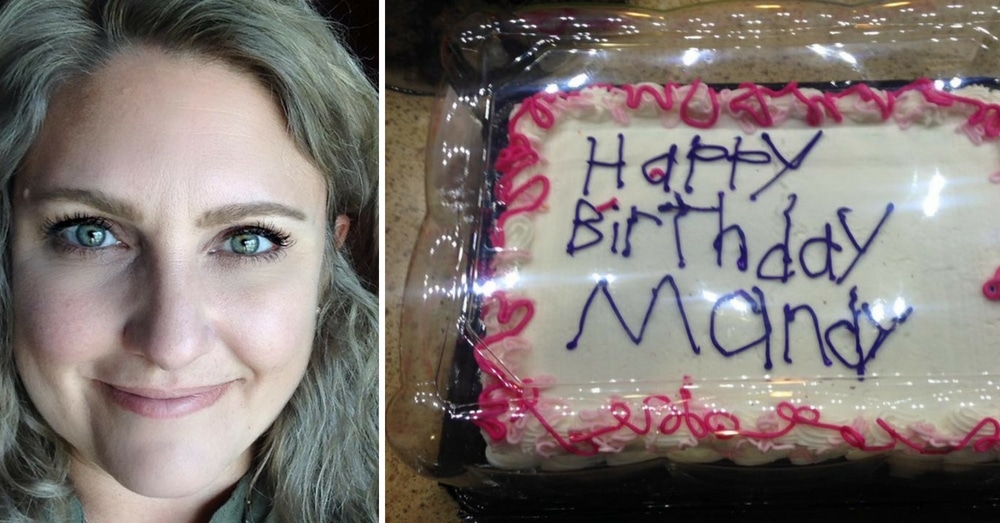 Lisa Aldrich was at the grocery story when she remembered that she needed to get a cake for an upcoming birthday party. She had seen the store advertise that they would customize cakes, so she went over to the bakery and asked the girl working there if she could write “Happy Birthday Mandy” on one of the cakes.

The girl agreed, took the cake to the back, and after a while brought the cake back and handed it to Lisa.

Without looking at the cake Lisa thanked the girl and headed to the cash register. As she walked over she looked down and saw that the writing was messy and uneven, but she decided not to ask the girl to fix it.

“I nervously laughed and headed to check out — it didn’t really matter to me that it looked so bad — I thought people would think it was funny,” she said.

When she got to the checkout, though, the other store employees didn’t think it was so funny. They called over some other employees and a manager to look at the cake, and some even started taking pictures.

It was then, though, that one of the employees told Lisa something that left her stunned.

“One cashier put her arm on my shoulder and said ‘the girl who wrote that has Autism. Thank you for smiling and thanking her- even though she’s not supposed to write on cakes, you probably made her day.'”

To Lisa, the writing on the cake was not that big of a deal – she knew the cake would taste just as good no matter what it looked like. But to the employee who decorated the cake, Lisa’s kindness and appreciation meant the world.

Lisa shared her story on Facebook where it quickly went viral. She said she hopes it will remind others of the importance of being kind.

“I am totally overwhelmed by God’s goodness, and how he has used this cake story!” she wrote. “I am sitting here weeping and reading through 100+ messages from people all over the country who have a loved one with Autism, thanking me. I just feel the need to say again — I didn’t do anything special. Be nice. That is all. I can’t believe how awesome God is that he is using this story to bless so many people! God is so, so good.”

Were you touched by Lisa’s story? So share this!