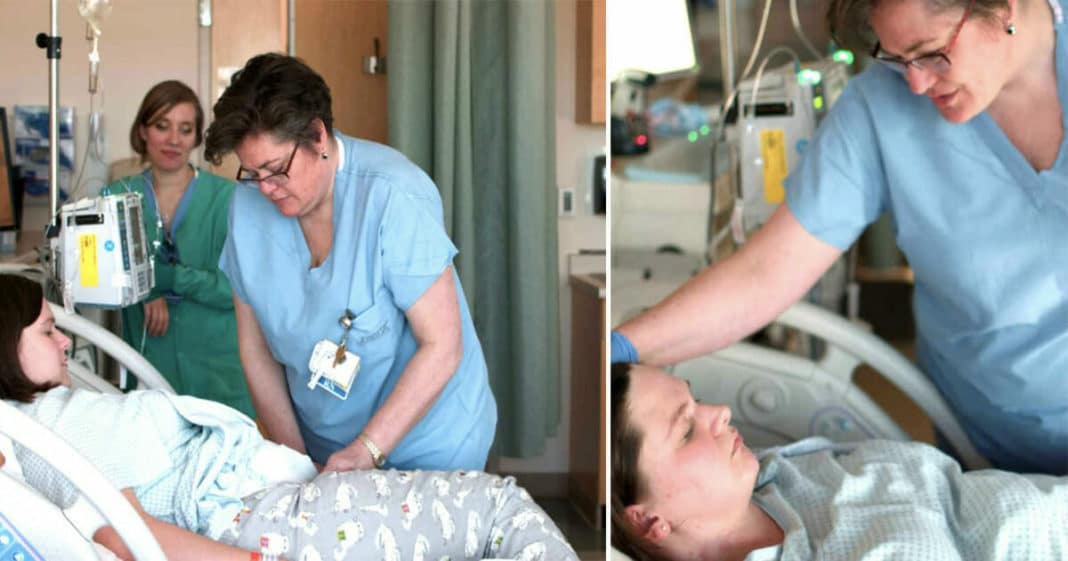 When a woman loses a child, the loss is so devastating and shocking that she frequently is unable to cope with taking photos of the child she lost. As can be expected, weeks or months after the loss, mothers regret not taking a photo, which would have made their babies feel more real and alive to them.

Fortunately, many nurses take photos of the babies, even if the mothers say they don’t want one. They know that there’s a good chance the mother changes her mind. One nurse on Facebook shared this touching story.

“As a retired RN, I took care of several patients with stillbirth newborns over the years. We had a memory box for the mothers that we took footprints and handprints. We also had a camera to take instant photos to give the mother. They treasured those memory boxes.”

Rachel Whalen, a kindergarten teacher from Vermont, lost her baby daughter Dorothy in 2016, and is deeply grateful that one special hospital worker, probably a nurse, had the foresight to take a photo of her little girl.

They asked if I wanted photos. .I said no..There wasn't a lot of time, but they asked again.."Are you sure?"…

Posted by An Unexpected Family Outing on Saturday, November 3, 2018

There is a heartbreaking backstory to Rachel’s loss. Sadly, she had miscarried twice before conceiving Dorothy, with both pregnancies ending in the first trimester. At 28 weeks into her pregnancy with Dorothy, Rachel learned that she had preeclampsia, a dangerous condition that affects some pregnant woman.

“[…] characterized by high blood pressure and signs of damage to another organ system, most often the liver and kidneys. … Left untreated, preeclampsia can lead to serious — even fatal — complications for both you and your baby.”

Even with 21st-century medical advances, preeclampsia often ends in heartbreak, with both the mother and the baby being in grave danger. Rachel lost her pregnancy when she was hospitalized and Dorothy died after a placental abruption caused by complications of the severe preeclampsia.

She rolled over the doppler to check Dorothy’s heart rate. I closed my eyes hoping to relieve the pressure in my head….

Posted by An Unexpected Family Outing on Friday, June 22, 2018

Rachel chronicled her experience in a blog post called “An Unexpected Family Outing.”

“On February 22, 2016, Dorothy Grace Helena Whalen was stillborn. Although she slipped into our world silently, her impact has been profound.”

Immediately after Dorothy’s death, the hospital staff asked her if she wanted photos. She declined, feeling that she wanted no memory of the death of her child. Later, she regretted it.

She doesn’t know the name of the person who actually took a photo of Dorothy, but she will always be grateful that someone understood the emotions that she was experiencing on the day Dorothy was born.

“She dressed her and wrapped her up.

She positioned her hands so delicately and tilted her head just so. And then she took a photo — our only photo of Dorothy.

I’m so glad she didn’t listen to me.”

Beautiful and painful, poignant and full of joy — don’t your emotions run the gamut just thinking about it?

We Need To Talk About Stillbirth

Worldwide there are over 4 million stillbirths each year. So why are we staying silent? We need to talk about stillbirth.For more resources and information about stillbirth visit Star Legacy Foundation and Still Aware.Many of the photos in this video were taken by volunteers from Now I Lay Me Down To Sleep. For more information about their organization, visit https://www.nowilaymedowntosleep.org/(Video published by An Unexpected Family Outing.)

Posted by An Unexpected Family Outing on Wednesday, March 21, 2018

As a result of her experience, Rachel Whalen has dedicated her life to helping women who have suffered the loss that she herself suffered. This story does have a happy ending. On March 19, 2017, Frances Michele Whalen was born.

“After Dorothy’s death, I turned to writing as a means of healing my broken heart.  In July of 2016, I started my blog, An Unexpected Family Outing. My blog became a place for me to share my journey with my friends and family and to continue finding the words to build Dorothy’s legacy.  That same month, I found out that I was pregnant with Dorothy’s little sister.”

You can continue to follow Rachel’s journey at Scary Mommy, Pregnancy After Loss Support, and Still Standing Magazine.