Mom Goes Into Premature Labor 35,000 Feet In The Sky, Then She Learns Who Else Is On The Plane 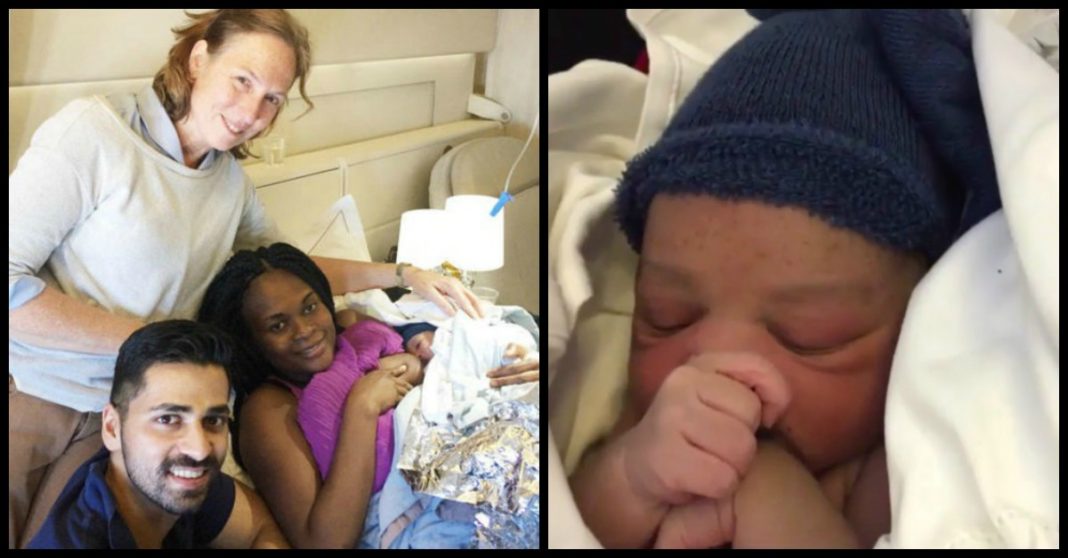 Who doesn’t love a little adventure? We’ll seek out the heart-pounding adrenaline rushes, but sometimes these instances find us. Thankfully, if you’re adequately trained, you’ll come through things just fine.

Doctors never know when their help is needed. They could be called to save a life at a moment’s notice. This was the case for two physicians on a flight heading to New York City.

Dr. Susan Shepherd is a pediatrician who was on board that December day. She was coincidently seated next to the other doctor. She was returning from Dakar. The other medical professional on the plane was Dr. Sij Hemal, a second-year urology resident at  Cleveland Clinic’s Glickman Urological and Kidney Institute.

Dr. Hemal was looking forward to some downtime. He had just flown from New Delhi, stopped over in France, and was heading to JFK International Airport before catching his flight back home to Cleveland.

Neither doctor knew they’d need to join forces to help Toyin Ogundipe have her baby 35,000 feet in the sky: “I was pretty tired from jet lag,” Hemal said in a statement from the Cleveland Clinic, recounting the busiest flight of his life. “I thought I’d just have a drink and fall asleep. As it turned out, I’m glad I didn’t drink anything.

”The crew contemplated making an emergency landing; they were flying over the southern coast of Greenland, at 35,000 feet. It would take two hours to reach the U.S. military base in the Azores. That station was around the same distance from their original destination. Before any verdict was reached, Ogundipe’s baby decided for them.

Shepherd rushed to help Hemal: “Her contractions were about 10 minutes apart,” Hemal explained. “[Dr. Shepherd] and I began to monitor her vital signs and keep her comfortable.”

Considering the soon-to-be mother’s comfort, the crew ushered her to the first-class cabin of the plane. It offered more privacy and had fewer passengers. The flight attendants looked after the Ogundipe’s 4-year-old little girl.

The doctors continued to monitor Ogundipe’s blood pressure, pulse and oxygen rate. They raided the aircraft’s medical supply kit. Ogundipe’s contractions accelerated over the next hour. When they were two minutes apart, everyone realized the baby wasn’t going to wait for the plane to land. And indeed, Jake came into the world a half hour later.

“I was relaxed because I knew I was in safe hands,” Ogundipe told Cleveland Clinic in a statement. “They did everything a doctor or midwife would have done if I was in the labor room in the hospital. Even better, if you ask me.

“Hemal assisted with seven births while in medical school. He’s never helped a woman give birth mid-flight: “We’re trained to stay calm and think clearly in emergency situations,” Hemal said. “I just tried to think ahead to what might go wrong, and come up with a creative solution.”

After a safe landing in New York, Ogundipe and her children were immediately taken to Jamaica Hospital Medical Center. Hemal continued home to Cleveland. As a thank you gift, he said Air France gave him a travel voucher and a bottle of champagne to make up for the glass he couldn’t drink during the flight.

“So much could have gone wrong, but it didn’t,” he said. “Being on that particular flight, sitting next to a pediatrician… it’s like it was destiny.”

Fate indeed. Things always have a way of working out. In this case, two doctors brought a new beautiful life into the world. That is one occasion worthy of a toast or two.