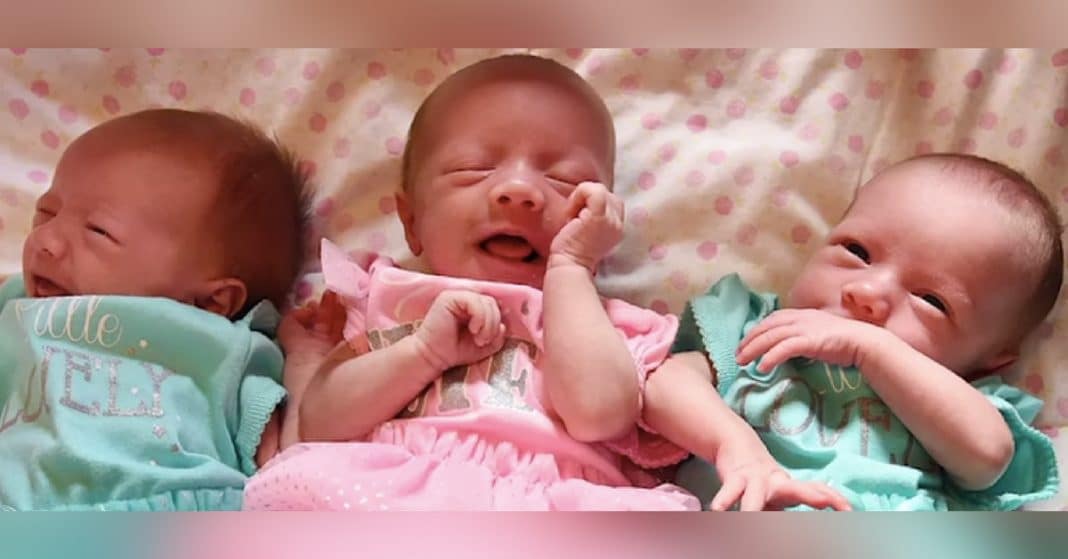 I love when family members or dear friends become parents or grandparents. It’s a joyous occasion to welcome a new life into the world.

Most families are blessed with one little miracle. Some may even get two. But three? That’s something else!

Amber and Levi are the parents of two adorable little girls, Lillian and Josey. The couple thought they were done having children, but God had other plans for them.

When Amber found out she was pregnant again, she went to the doctor for an ultrasound. As the doctor moved the wand over her stomach, they heard not one heartbeat, but three!

Without any fertility treatments, Amber had become pregnant with triplets, something that only happens in one out of every ten thousand pregnancies!

The couple took their pregnancy in stride. When Amber went into labor a month early, the only option was to deliver the babies by emergency c-section.

That’s when things started to get scary for the young couple. During the operation, Amber started to hemorrhage. After the safe delivery of their children, she actually died twice. Doctors did all they could to bring her back, including giving her blood transfusions.

Levi discussed how frightening it was to see Amber have a code blue.

“It was the scariest moment of my life,” he said. “I was afraid I was going to be bebopping home with three new babies and no momma.”

Amber had lost a lot of blood but, miraculously, she pulled through. Six hours after her heart stopped, Levi was able to visit her. She was sedated and hooked up to a breathing tube, but she was alive.

After the traumatic labor and delivery, the couple was just happy that everyone had survived. But then they discovered something even more incredible.

Their three little girls, Norah, Rylan, and Remi, were actually identical triplets, meaning the original egg had split twice. The odds of this happening are only one in two hundred and fifty million!

Bringing home triplets was a big adjustment for the family, but thankfully there are plenty of helping hands to care for the little ones. Amber and Levi’s Alabama home is so close to his parents’ place they can see it from their window, and the proud grandparents are only too happy to help.

According to Levi, the babies go through at least 21 diapers a day, and those quickly add up! To offset the many expenses of caring for three babies, friends of the couple have started a GoFundMe page.

This little family certainly has their hands full, but they wouldn’t have it any other way!

Were you amazed when you saw how rare the triplets’ birth was? So share this!