Mom Gets Pulled Over For Speeding. What Cop Writes On Bottom Of Ticket Leaves Her Speechless 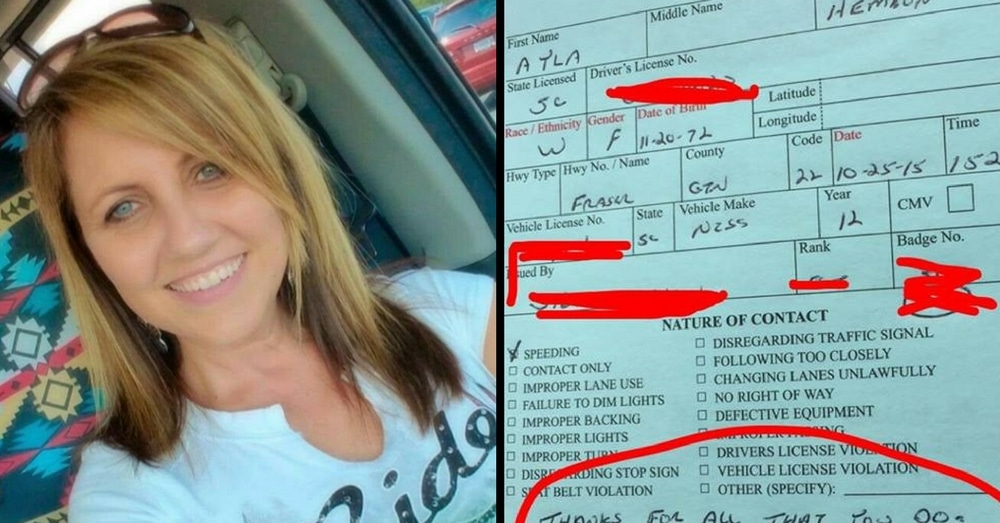 Ayla Hemeon was having one of those days. She was rushing around town, trying to drop some things off at her parents’ house before going home to help her daughter with her homework.

She was so focused on everything she had to do that she didn’t even realize she was speeding until she saw lights in her rearview mirror. Immediately her heart sank as she pulled over to the side of the road.

When the officer came over to her window, Ayla began to explain herself. She told him that she was trying to take a pumpkin over to her elderly parents’ house before getting home in time to help her daughter with her homework before she had to go to bed.

Ayla insists she wasn’t trying to get out of her ticket – she just wanted to explain herself to the officer. She then watched him walk back to his car and start writing up the ticket.

“He went back to his police car and I could see him busily writing my ticket,” she said.

When he came back to the car she couldn’t believe it – he had only given her a warning! Ayla was so relieved that she didn’t even look at the ticket before heading home.

It was only when she got there that she inspected the ticket and saw something written on the bottom that left her stunned. She was so touched by it that she shared a picture of the ticket along with her story on Facebook.

“Thanks for all that you do,” the officer wrote. “You could have spent Sunday alone, but you’re spending it helping your parents and daughter. Have a good day.”

Ayla couldn’t believe it. She definitely deserved a ticket, and the officer had much more important things to worry about, but he chose to see all that she was dealing with and show her kindness anyway.

“I can honestly say it made me tear up,” Ayla said. “This officer made my day.”

Were you touched by what this officer did for Ayla? So share this!